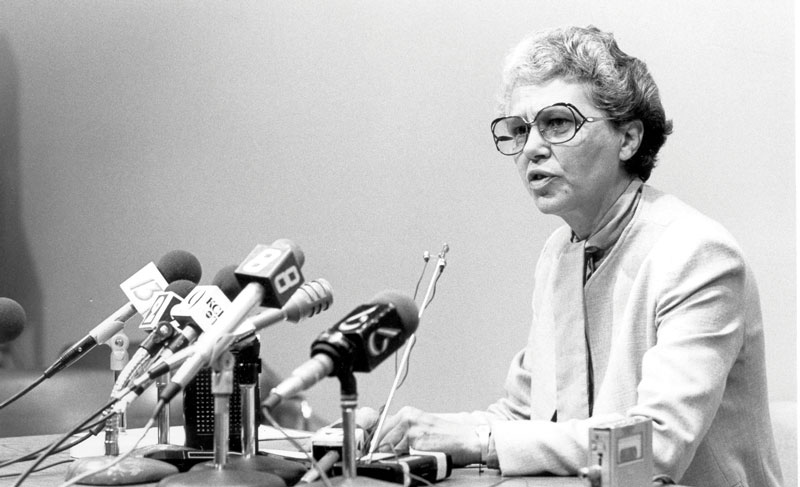 The article about Christine Grant (70BA, 74PhD) [“How Christine Grant Changed the Game,” spring 2022] is great and really summarizes all she accomplished on behalf of women’s athletics. My oldest daughter, Penny O’Brien Tully (85BBA), ran track and cross-country for Iowa during the 1980–1985 timeframe as a scholarship athlete. She ended up an All-American at 3000 meters, setting the school record for that distance that held for 30 years. None of that would have been possible without the tremendous effort by Grant and her associates.


In 1972, I took a field hockey and golf class with Grant as an instructor. She was working on her PhD at the University of Iowa. Grant said she wanted to start a golf team, so a friend who played golf and I said we’d join. A few others followed, and we had a ragtag Iowa golf team. We drove to Ames and played against Iowa State at Veenker Memorial Golf Course, but nothing came of it until Grant persevered, Title IX was initiated, and women’s sports began at Iowa. I went on to work in the community college athletic programs at North Iowa Area Community College and Iowa Western Community College, all inspired by Grant. Then I became a golf professional, holding an LPGA and PGA card. She was my hero.


It’s not often you receive a magazine and have someone familiar staring at you from the cover. After 50-plus years, what a delight to see Grant again. I was working on my PhD with Grant and witnessed the work of those mentioned besides her: N. Peggy Burke (65PhD), Bonnie Slatton (70PhD), and, of course, the person who led the parade for years before them, M. Gladys Scott (31MA, 37PhD). Scott was the main reason I selected Iowa but after I got there, I met these wonderful people and others who were so influential to me and the future of women’s sports. How proud I am to have been in the company of Grant and our mutual friends and acquaintances.


I was the UI basketball coach for women from 1974 through 1979. The article about Bump Elliott and Grant’s time as athletic directors [“A Golden Age of Hawkeye Athletics,” winter 21-22] is a bit misleading in the way it is laid out and worded. I am appreciative you mentioned Grant, yet it implies Elliott had some responsibility for the women’s hirings. Grant hired coaches Judith Davidson, C. Vivian Stringer, and Gayle Blevins, and Elliott hired the men’s coaches. They both had equal titles and separate departments to manage, reporting separately to President Sandy Boyd.


Elliott and Grant were the top athletic directors in their time and worked very well together. This was a golden age for both men’s athletics and women’s athletics. Approached separately, quite a bit surfaces about Grant’s accomplishments for the Hawkeyes and for equality and justice for girls and women in the United States. I’m also including a link to a video that showcases Grant at the start of Title IX and her career at Iowa. I think it highly important that this video be viewed by readers since it is the only one available for the dawning of Title IX at Iowa. It is a treasure to the history of Grant, Title IX, and the UI.

The winter 2021–22 issue featured a number of items I was interested in. Someone sent me just the tear sheet of p. 34 [“175 Things We Love About the University of Iowa”], which had my dad, James Van Allen (36MS, 39PhD), at No. 40. But there are many other interesting items as well. As someone who grew up in Iowa City and reaped the benefits of being able to see every single concert, play, book signing, and author talk, I feel a great debt of gratitude to the University of Iowa. My family as a whole is greatly indebted to the university and Iowa City.

Just on that page alone, aside from my dad, there was Mauricio Lasansky, whose work hung in every faculty home and whose kids went to school with my siblings and me. There was Paul Engle (32MA), who had a trampoline in his yard where I broke a sandal. George Gallup (23BA, 25MA, 28PhD, 67LLD) gave my sister Sally a job at the Gallup Organization in Princeton, New Jersey, and she retired from there after 30-plus years. So much good stuff.

The heartwarming story about Iowa Writers’ Workshop graduate Xochitl Gonzalez (21MFA) [“Olga Dies Dreaming,” winter 2021–22] makes me homesick and brings me great joy. I grew up in Iowa City and also lived the college life, graduating from the UI College of Nursing in 1986. I have long since moved from Iowa City, but I visit every now and then and always have a cheeseburger at George’s.

The Art of the Breakthrough

I enjoyed the article about the research of UI experimental psychologist Ed Wasserman [“The Origin of Innovation,” winter 2021-22]. I would like to suggest a fourth C that leads to new ideas, in addition to context, consequence, and coincidence—constancy. It is a common trait of those who make innovative discoveries.

I just wanted to tell you how proud you made me feel being a UI grad as I read the fall 2021 issue of the Iowa Magazine. Thanks for putting so much of your time and skill into its publication.

This got me thinking. As a math major, I just didn’t have to write much. All that changed in grad school at the UI. Initially, I held an assistantship in the Evaluation and Examination Service. We put out a lot of technical reports. Then I moved on to the Liberal Arts Advisory Office, where I wrote the descriptions and regulations for a lot of the relatively new policies, such as second grade option, taking courses on a pass-fail basis, the Bachelor of General Studies degree, and the College-Level Examination Program.

My first publication was on CLEP; it was co-authored with Richard Braddock of the English department. I did publish the first longitudinal study on CLEP while still in grad school. I never really thought about it—at the UI, we just wrote. That preparation has served me well over a career. Thanks to the Iowa Magazine for pointing this out by your example.

In my high school days, 1968–71, the best pizza in Iowa City [“Pizza Pride", summer 2021] was George’s Gourmet pizza, which featured round pizza cut in signature squares. The original location burned down in 1970. It rebuilt in what later became The Mill, and there was a satellite George’s out on the east side of Iowa City on First Avenue, where the Hy-Vee now stands. After George’s closed down, my loyalties turned to Pagliai’s. 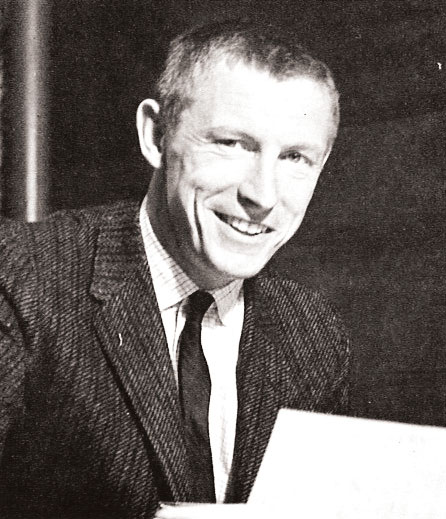 I noticed the inclusion of Jerry Burns in the “faculty and friends” category of the In Memory section of the spring 2022 issue. As an Iowa City native since 1956 and alumnus whose father was a long-term professor at the UI, I was a bit taken aback that Burns’ passing at 94 did not warrant a brief mention in the main part of the magazine, given the emphasis on UI sports normally presented in the publication. I realize it was a long dry spell after Forest Evashevski’s winning seasons, but Burns was UI head football coach for five years and went on to have a successful coaching career in the NFL. 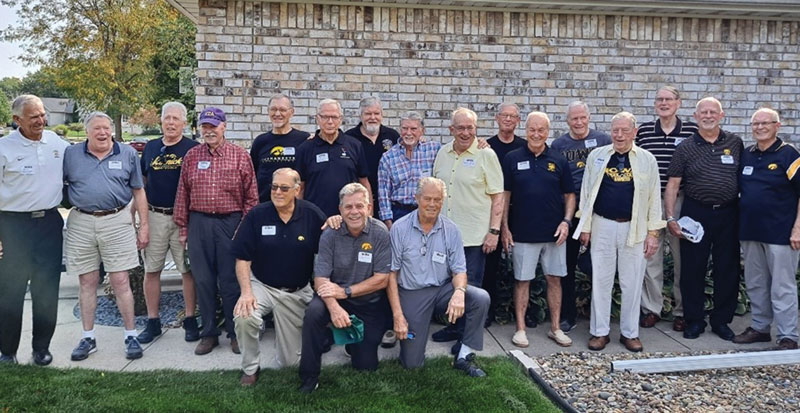 The Delta Tau Delta social fraternity “boys” and their wives held a reunion in Iowa City last fall, where we witnessed the celebrated Iowa victory over Penn State [“Instant Classic,” winter 2021–22] and the bedlam on the field that followed the win while reminiscing, singing, and laughing. Nothing had changed in nearly 60 years!