Reading Karein Goertz’s (88BA) harrowing, heartbreaking account of her father’s brutal murder at Van Allen Hall 30 years ago brought back memories of that dreadful day [“Fragments: Memories of My Father],” fall 2021. I was living in Des Moines, having returned from living in the Boston area for many years, and enjoying the relative safety and quiet of Iowa.

To see a mass murder unfolding in bucolic Iowa City was beyond shocking. Since then, there have been dozens of them, so many that we can’t begin to remember them all. Yet little action has been taken by Congress, due in large part to the awful power of the gun lobby. One wonders if anything will ever be done to halt the insanity.

I was gratified to read that Karein Goertz and her family members have been able to move on to a large degree, but the horror of that day will remain an indelible memory of senseless violence.


Professor Christoph Goertz was enormously influential to me, an English major who had the great good luck to take his courses as part of the Unified Program, an integrated two-year honors curriculum. His ability to quote Shakespeare on a whim and his remarkable patience with my slowness to grasp the math behind the concepts were astonishing. I think of him often, and now I have another layer of his rich family life to add to the picture. I am grateful.


Karein Goertz’s article brought a different kind of Iowa memory to me. I read about this tragedy while in China before becoming a graduate student at UI in August 1992. Soon after my arrival in Iowa City, I heard more details from the Chinese students around me. I felt ashamed and just couldn’t understand why Gang Lu did it. I still vividly remember the first Halloween I experienced in 1992 at Iowa, with some worry in my mind being a Chinese student at the first anniversary of the tragedy. But it passed by peacefully and joyfully.

From reading Goertz’s touching words, I can still feel the pain she and her family experienced in those years, and I am glad to know that they have normal lives now. We have at least two things in common: our age and the determination for gun control to prevent school shootings.


Though I was only 10 when this event occurred, I still remember it clearly because my older brother had been on the UI campus earlier that day for a college visit. Upon hearing the news, I had the inevitable “what if ” thoughts, but those mercifully faded quickly because such shootings were at the time an extremely rare occurrence.

Years later, I was a student at the university, and I remember attending a seminar presented by UI physics and astronomy professor Crockett Grabbe. It happened to be around the 10-year anniversary of the shooting, and he spoke at some length about the events of that day and how they had affected him personally.

It was quite a feeling to sit in Van Allen Hall and hear about that day from someone who had experienced it directly. This essay resurfaced those feelings. 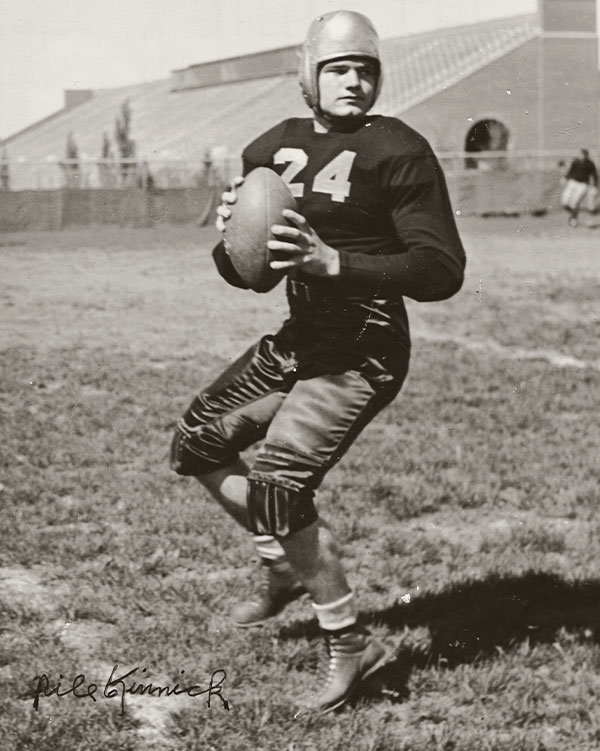 I have an autographed picture of Nile Kinnick (40BA). On the back are written his various awards and trophies. At the end is this note: “This autograph was signed when he was back on leave after he received his wings in 1942 during football season here at Iowa.” Your article [“Kinnick’s Final Days,” summer 2018] confirms that visit and provides the time frame. Decades ago, my father, George Devine (43BSC, 56MA), identified the handwriting on the back of the photo as his father’s [Glenn D. Devine (22BA), the starting right halfback on the undefeated 1921 Iowa football team and a former UI assistant athletic director]. My grandfather picked up Kinnick at the train station when he returned for his last visit to Iowa City.

I have been friends for 50 years with half of this cave exploring team and was thrilled to read your account of their amazing exploits in the discovery of Coldwater Cave [“Iowa’s Underground World],” fall 2021. This is truly a timeless and inspiring story that deserves media attention.

I enjoyed the article about Duke Slater (28LLB) in the fall issue [“Celebrating Slater”]. It brought back memories of when I was working on the private dining crew in the Iowa Memorial Union. Dining Service had the job of serving Iowa sports alumni in the Field House before all the home football games. I served on about four or five of those from 1958 to 1960. I remember Slater, who attended several of those events, and we would chat briefly while I served coffee, baked goods, and fruit. He was well greeted and respected by the other attending sports alumni back in those days.


This story is quite special to me, because Slater was a great friend of my grandfather, Clifford V. Smith (25BE), and godfather to my dad, Clifford V. Smith Jr. (54BSCE). My grandfather and former Iowa football player Archie Alexander (1912BE, 25CE) also worked together on various construction projects in Washington, D.C.

Your story on favorite pizza [“Pizza Pride,” summer 2021] brought back the memory of my introduction to pizza. In September 1966, I arrived in Iowa City with Ethiopian writer Daniachew Worku (68MFA). We were rather hungry and asked W. Maner, the foreign student adviser, about dinner. He suggested we look for a pizza place. Neither Worku nor I had any idea what he was talking about. Shortly we saw a big, flashing neon sign: “Pizzeria.” We decided to take a chance, and as we sat down, a waitress came by and asked with a smile, “What would you like to have tonight?” We said, “A pizza.” “Sure,” she said. “And what about toppings?” We had no idea what toppings meant. She rattled off, “Sausage, pepperoni, black olives, banana pepper . ...” We asked her sheepishly, “Can we have them all?” She noticed the big question marks on our faces and reassured us that we would like it. Fifteen minutes later, she brought us the most delicious pizza—our introduction to the great American culinary wonder!

Thank you to Pavane Gorrepati for writing a children’s book on alopecia [“Fighting a Childhood Stigma,” fall 2021]. I was diagnosed with this autoimmune disorder as a 12-year-old, and it was a frightening experience to discover that first bald spot. There was little information available for my parents, much less for a child. I am a retired children’s librarian and know how helpful Gorrepati’s book will be for many other children.

Your story in the fall 2021 issue [“Iowans’ Marrow Donations Save Strangers’ Lives”] mentioned the UI being one of the oldest programs offering marrow transplants from unrelated donors. After reading that story, I wanted to share that Hawkeyes not only give back, but they also receive.

Last year my brother, David Swanson (91MD), an anesthesiologist from UI Hospitals & Clinics, donated his precious, life-sustaining stem cells to me. Receiving stem cells means rebirth to people with blood cancers. In other words, a cure is possible for recipients. More than 90% of stem cell transplants now use cells collected from the bloodstream rather than the more painful and complex bone marrow aspiration. With a simple blood or stem cell donation, anyone can save a life.

A huge thank you goes to stem cell donors like David Swanson, as well as Michaela Heys, the bone marrow donor mentioned in your article, for giving from your heart.

I returned to Iowa City in 1981 to study for a Master of Social Work degree at the University of Iowa. I vividly remember walking into Wild Bill’s Coffee Shop [“From Coffee Shop to Learning Lab,” winter 2021-22] that January with my two daughters, Tanya (then 7) and Trina (5), seeing Bill Sackter at his coffee machine, and exclaiming, “There is a Santa Claus, and there he is!”

We became friends with Bill and had him over to our home numerous times. On occasion, I would have a meeting at the school and drop my daughters off at Wild Bill’s. I would always tell Bill not to give them any candy or soda, but of course when I came back, they would always have both.

Tanya eventually went to work with folks with developmental disabilities at Opportunity Industries in Missoula, Montana, where she has worked for over 22 years—I believe because of knowing a remarkable human being named Bill Sackter. In 2015, Tanya won a Bill Sackter Award, which earned her a plaque on Wild Bill’s Coffee Shop wall. We have such fond memories of attending the ceremony and will always cherish having known Bill.

Introduction to the Arts

I read David McCartney’s column on “Hancher’s Half-Century of Impact” [fall 2021], and it reminded me of when I bought a student Hancher package as a freshman in 1985 with friends I made in Hillcrest Hall. Hancher exposed me to artists and performances I didn’t have in my hometown of Pierre, South Dakota.

The arts have been part of my life since then. I’m fortunate to attend events in Columbia, Missouri, as a longtime resident. Love my Iowa!