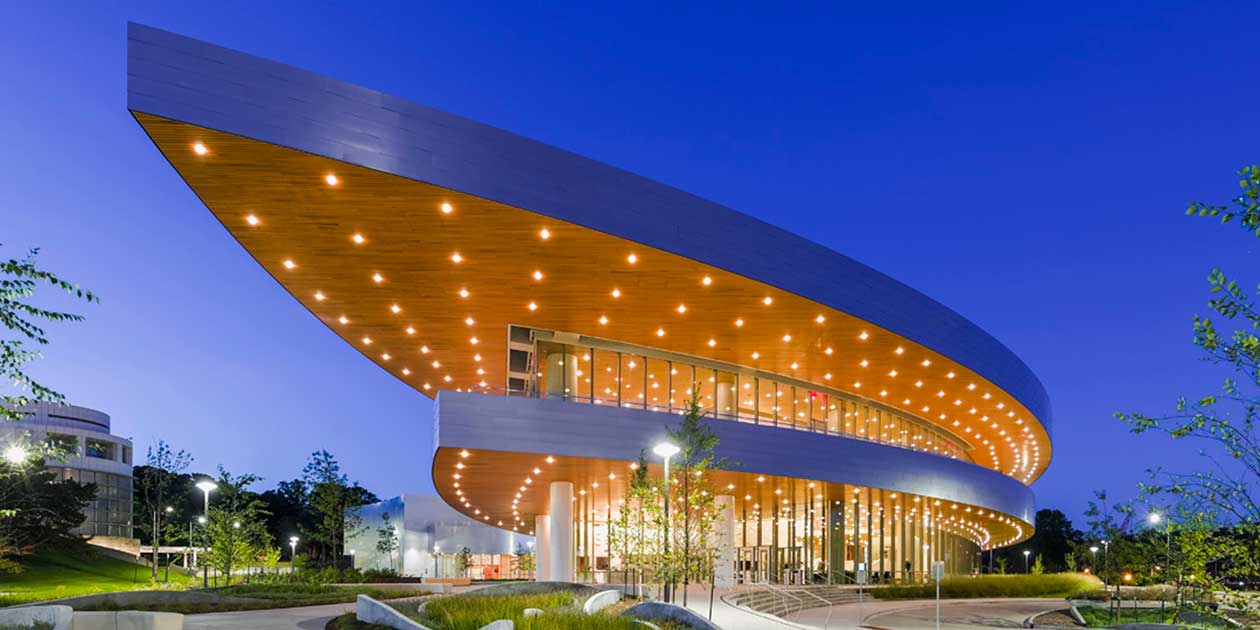 PHOTO: JUSTIN TORNER/UI OFFICE OF STRATEGIC COMMUNICATION Hancher cut the ribbon on its current home in 2016 after the original auditorium was destroyed by the flood of 2008.

I was 16 years old when I first set foot in the then-new Hancher Auditorium during its premiere 1972-73 season. My parents and I made the nearly three-hour drive from our home in northern Iowa to visit the venue, named for Virgil Hancher (1918BA, 24JD, 64LLD), the university's 13th president.

The newly dedicated concert hall was like nothing I had seen before. In the years to follow, Hancher established itself as a center of innovative and diverse entertainment. Even the devastating flood of 2008 didn't deter Hancher staff from continuing to offer events at other venues while the new building was under development.

Indeed, whether hosted in Iowa City or in another Iowa community, Hancher-sponsored events have made memories for nearly 50 years. The golden anniversary of this unique Iowa treasure is in September 2022, and Hancher would love to hear your personal stories. 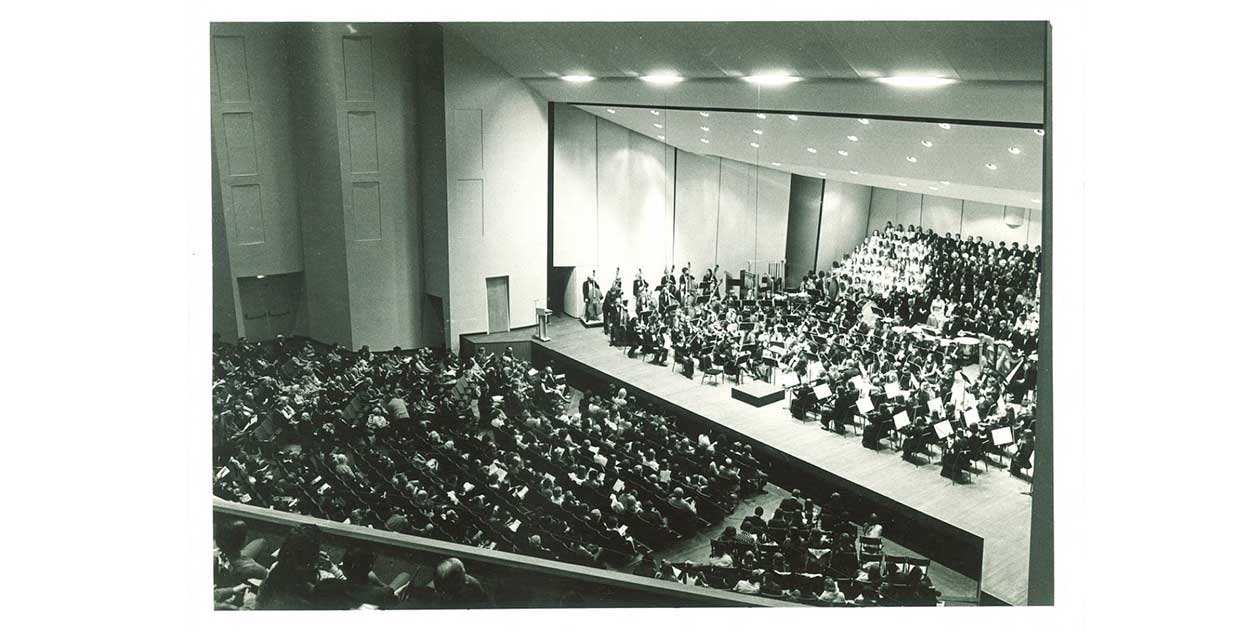 PHOTO: FREDERICK W. KENT COLLECTION OF PHOTOS, UI LIBRARIES UNIVERSITY ARCHIVES An orchestra and choir perform in the original Hancher Auditorium in 1972, the year it opened on the University of Iowa campus.

Scott Buchanan (84BGS, 86JD) of Algona, Iowa, has many to share. His northern Iowa community, about an hour west of my hometown of Charles City, has partnered with Hancher many times over the years. While performances are part of Hancher's "traveling curriculum," it's the weeklong community engagement that makes its partnership with Algona particularly remarkable.

Let's hear it in Scott's own words:

"The Hancher-Algona collaboration [made possible by the Algona-based Haggard-Twogood Charitable Trust] has enriched our community in countless ways—from delighting health care providers with a string quartet in their lobby, to the energetic and captivating performance of zydeco musician Terrance Simien for elementary students, most of whom sat wide-eyed and enchanted by this large smiling angel of a man who charmed and entertained them with a show they will never forget.

"Our trust's collaboration with Hancher is precisely what the research shows will help sustain our community and attract next-generation residents to live and work here in the new economy. I will be forever grateful to [Hancher director] Chuck Swanson (75BBA, 76MBA) and his staff for the generosity, insight, and affirmation. It helps to shape the future of our community using the arts and the University of Iowa as vital resources."

The University Archives houses records of Hancher Auditorium, many of which are now online. Go to the Iowa Digital Library at digital.lib.uiowa.edu and search "hancher auditorium." You'll find thousands of images, including photographs of construction of the original Hancher, event programs, posters, and more. Who knows? Maybe you'll find your own Hancher memories included. If you have any to share, we'd love to hear them.

Hancher Auditorium is collecting your memories from its 50 years of connecting artists and audiences. Stories will become part of the online portion of Hancher's 50th anniversary exhibit, and some may be used in the physical exhibit). To submit a favorite memory, visit hancher.uiowa.edu/HancherStories or email hancher-social@uiowa.edu.

Join our email list
Get the latest news and information for alumni, fans, and friends of the University of Iowa.
Sign up now
Related Articles
New Iowa Spirit Squad Alumni Group is Reason to Cheer
The new organization will create mentorship opportunities and new ways to support current team members.
Iowa Medical Student Authors Children's Book to Fight Skin Stigma
Fourth-year UI Carver College of Medicine student Pavane Gorrepati publishes a book to educate young readers about alopecia, a condition that can cause childhood hair loss.
Fragments: Memories of My Father
On the anniversary of the tragic 1991 campus shooting, the daughter of University of Iowa physics professor and renowned space plasma theorist Christoph Goertz reflects on her family's loss—and the healing that came after.
New Scholarship Honors Longtime Iowa Professor Jay Holstein
Avengers director Joe Russo and three other Hawkeyes share how the popular religious studies professor has opened the minds of generations of students.
Advertisement