Your articles on the Iowa City music scene (“Glory Days,” summer 2022) brought back many memories. I thought you would enjoy seeing ticket stubs from some of the shows mentioned in the articles. Below are stubs from Bruce Springsteen, Hancher Auditorium, Sept. 26, 1975; Grateful Dead, UI Field House, Feb. 24, 1973; and Frank Zappa, UI Field House, Sept. 24, 1977.

Unfortunately, I don’t have ticket stubs from my other favorite shows: Willie Dixon at COD Steam Laundry in February 1974 and Brian Auger’s Oblivion Express at COD on Feb. 20, 1976. (Incidentally, the audio from Brian Auger’s show can be found on YouTube). 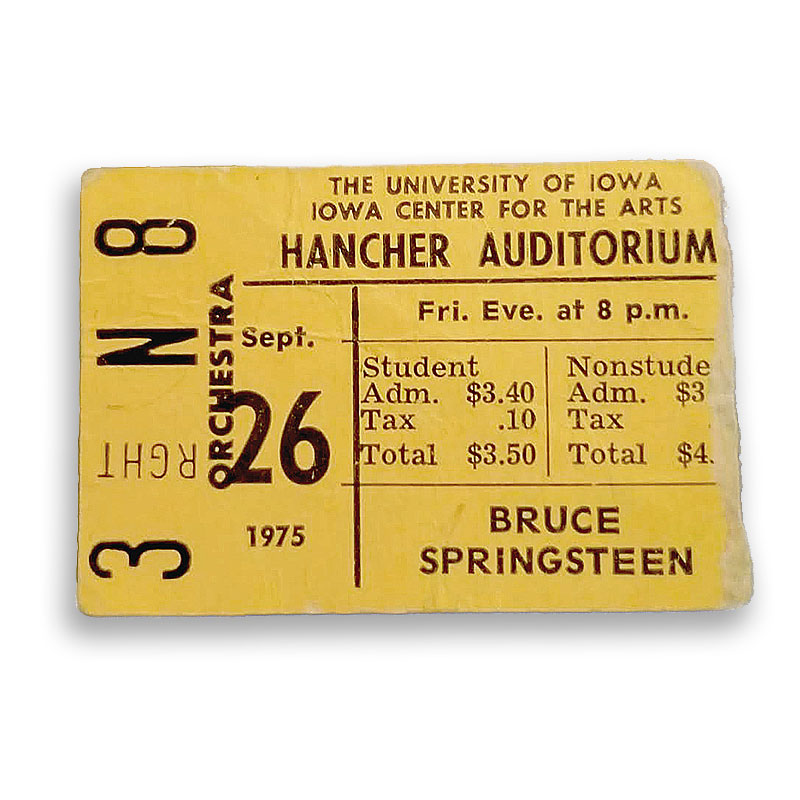 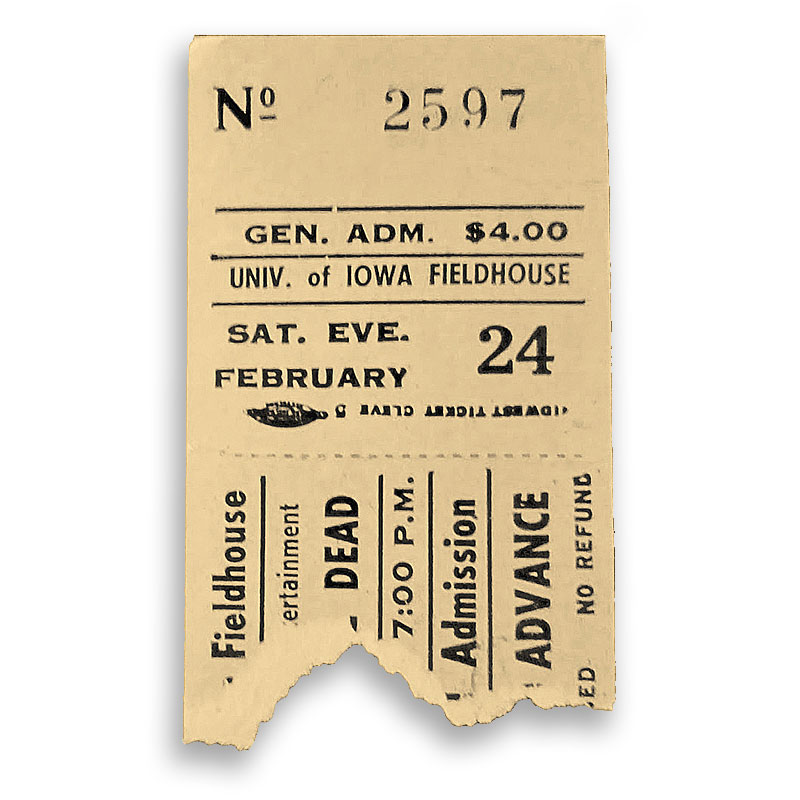 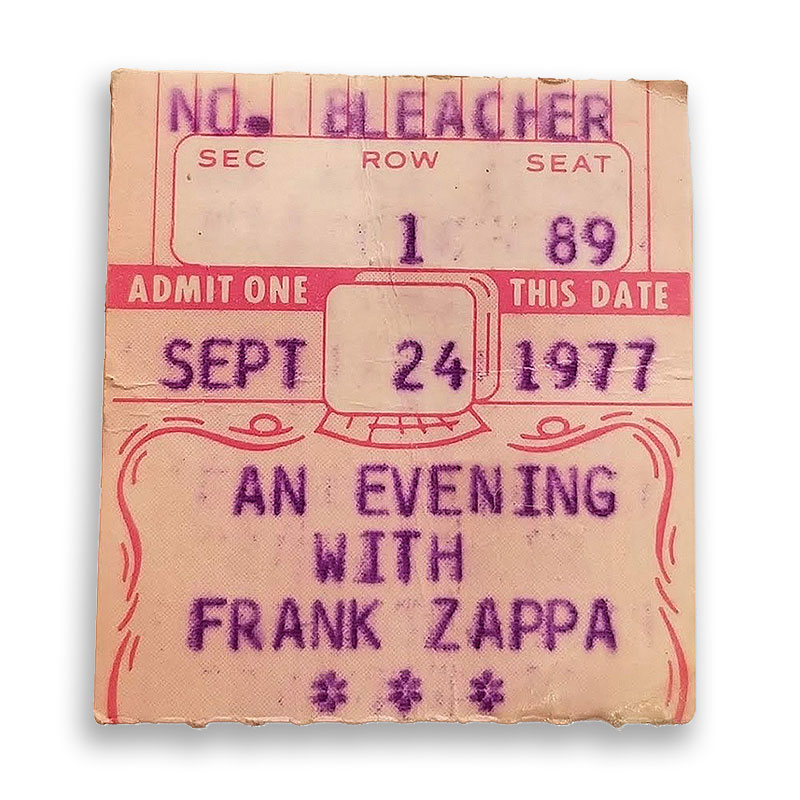 I was intrigued by the focus on music for the summer 2022 issue of Iowa Magazine and especially with the article about “The Festival Founder” Don Muller (84BA) [“In the Groove” p. 32]. On the poster graphic accompanying the article that showed what musicians Muller had worked with, Weezer was one of several alternative rock groups listed.

I wish to point out that there is an Iowa connection with that group. The longtime guitarist, keyboardist, and backup vocalist for Weezer is Brian Bell, who was born at University Hospital in 1968. He was born prematurely and required special care, and, at about 6 months of age, received a necessary surgical procedure performed at the hospital by one of the top pediatric surgeons in the country. You might say he owes his life to the University of Iowa, and I am his proud father and an Iowa alumnus.


As a member of the UI history department (1967-2008) who also played regularly in virtually every local musical ensemble but the marching band, I’m disappointed that there’s not a word of reference in the “In the Groove” section of the summer issue to Red Cedar Chamber Music. Its founding parents, Carey Bostian (97MFA, 01DMA) and Miera Kim (97BA) are serious pros and alumni any School of Music could be proud of. Among other achievements, they’ve connected with a global audience via YouTube and both Naxos and Fleur de Son Classics CDs.


Your music issue could have mentioned that Iris DeMent lives just outside of Iowa City and in recent years gave a free campus concert in support of women’s rights. She, of course, has been on Prairie Home Companion, featured in movies and TV, and sold millions of records.

I loved the music issue but can’t believe I missed the call for music memories, because I have a great one that occurred at one of your “25 Legendary Iowa City Concerts”—the Tina Turner concert on Sept. 19, 1985.

Just for fun, here is my music memory: When I was about to finish my Peace Corps service, I joked “I am going back to the States just long enough to see Tina Turner in concert.” I arrived in Oelwein in late July 1985 and, on Sept. 19, was in Carver-Hawkeye for Tina. Mid-concert, she left the stage, and I told my buddy, “Follow me.” We headed to seats behind the stage and were the only ones there.

Wardrobe change completed, at the very back of the stage, Tina came rising from below, with her back to the crowd but facing the two of us. We heard the opening notes of a very familiar song. Tina started shimmying, and she became our “Private Dancer.” She did not pretend we were not there, but looked right at us, smiling at us as she danced. I do not know what caused me to “find” our private dancer; I certainly did not have any advance knowledge. Must have been some sort of sixth sense by a veteran of many rock concerts.


While reading “Glory Days,” I recalled a concert my roommate and I attended. In 1960, the great Ella Fitzgerald came to Iowa City. My recollection is the concert was free since we came early and sat in the front row. She gave a wonderful performance, and even 62 years later I remember it vividly.


The Boss in Iowa

Thank you so much for sharing “Springsteen, Hancher, and a Rock Tsunami” [summer 2022, p. 30]. I’ve been an avid Bruce Springsteen fan since my brother took me to my first Bruce concert in 1975 at the Chicago Auditorium. Since then, I have seen Bruce live 30-plus times.

I was fortunate to meet him in person as a sit-in for his “Glory Days” video, which was shot at Maxwell’s in Hoboken, New Jersey. Bruce inspired me to learn how to play piano as a hobby, and I told him that during a break from the video shoot and thanked him. He graciously thanked me and was so humble. That solidified my respect for him as a person and iconic artist.


I was in school at Notre Dame in 1975 and saw the Born to Run show there. I did see Bruce Springsteen and E Street in June 1978 at Hancher. It wasn’t even a full house, but Springsteen and Clarence Clemons commanded the stage. Magic.

Two of the three features teased on the striking gold record cover of your summer edition (“Glory Days” and “In the Groove”) hurled me back in time to my salad days on campus in the mid-1970s. Friendships forged there included both John Gallo (78BGS), who booked the Springsteen concert at Hancher in September 1975, and Jack Rovner (77BA), who I now know went on from Iowa City to a career in the big leagues of showbiz. Thanks to Gallo, I got to help unload the E Street Band’s equipment and was comped choice seats for that historic show. And Rovner, I recall, particularly enjoyed listening to Aretha Franklin’s Respect when we were all socializing during breaks from our studies. Jack, if you see this, please accept my sincere R-E-S-P-E-C-T and congratulations for all you’ve achieved since we left school.

“Bedrock of Discovery” [summer 2022] brings back wonderful memories. I was on that 1968 Grand Canyon trip and distinctly remember much of it with fondness. I still had my field notebook from that trip, complete with a thumbnail-sized sample of each rock in the Grand Canyon column, when I taught as an adjunct at a local community college 40 years later. The Des Moines Register did a full article with color pictures of the 1968 trip in one of its Sunday supplements.

Writer Markes Johnson (71BA) is correct in stating that field trips are far superior to traditional classroom geology lessons. This article has allowed me to link up with Johnson. Even though his career went one direction and mine in a totally different one, we still have that grand experience in common.

This is in response to the Iowa Magazine story about the Maryland fan who received emergency care at Carver-Hawkeye Arena [“Heart of Gold,” summer 2022, p. 7]. I am so very proud to say I am Iowa born and raised and believe we have the best people in America living here. I’m so proud of our UI Hospital & Clinics and all the Iowa schools and teams. We set an example the rest of the world can follow. Thanks for sharing this inspiring story and generous donation.


Recognition of Women in Sports

Regarding your spring 2022 issue featuring Christine Grant (70BA, 74PhD) [“How Christine Grant Changed the Game”], I got acquainted with Grant when I was a part-time student at the UI. We met a few times for lunch and seemed to have a lot to talk about. I was a state senator at the time, representing Jones, Cedar, and part of Linn County. Before marriage I had hitchhiked through western Europe, including England, Ireland, and Grant’s native Scotland.

I mentioned to her that I got tired of having some male senators use their point of personal privilege to expound on how great the male Hawkeyes were—and they were—but no one mentioned Iowa’s female athletes. I said I would like to arrange a reception for the women in Des Moines, and Grant explained that they could not accept any food or beverages because of their amateur status, but they could come visit the legislature.

When word of what I was trying to do got out, one of my critics in the Senate tried to cause trouble for me with Sen. Jean Lloyd-Jones (71MA) and Rep. Minnette Doderer (48BA) by saying publicly that I was trying to usurp the area they represented. I knew both of them were gracious enough to understand and would gladly host the student-athletes in the Senate and House if they came. So come they did, and they were a big hit with all the legislators, including the troublemaker.

Grant was really one-of-a-kind, and Iowa was lucky to have had her here.