An Alumnus Photographer in Minneapolis: At the Epicenter of a Movement

By Josh O'Leary
2 minute read
Award-winning photographer David Guttenfelder chronicles a city in mourning after the death of George Floyd.

David Guttenfelder (93BA) has chronicled conflict in more than 100 countries over the course of his acclaimed 25-year career as a photojournalist. From Afghanistan to North Korea, the Iowa native has covered global events for the Associated Press and National Geographic.

On May 25, tragedy and history unfolded on his doorstep in Minneapolis.

The killing of George Floyd ignited protests against police brutality and the mistreatment of Black citizens across the nation. Guttenfelder documented his city's grief and anger, while at the same time grappling with his own emotions. 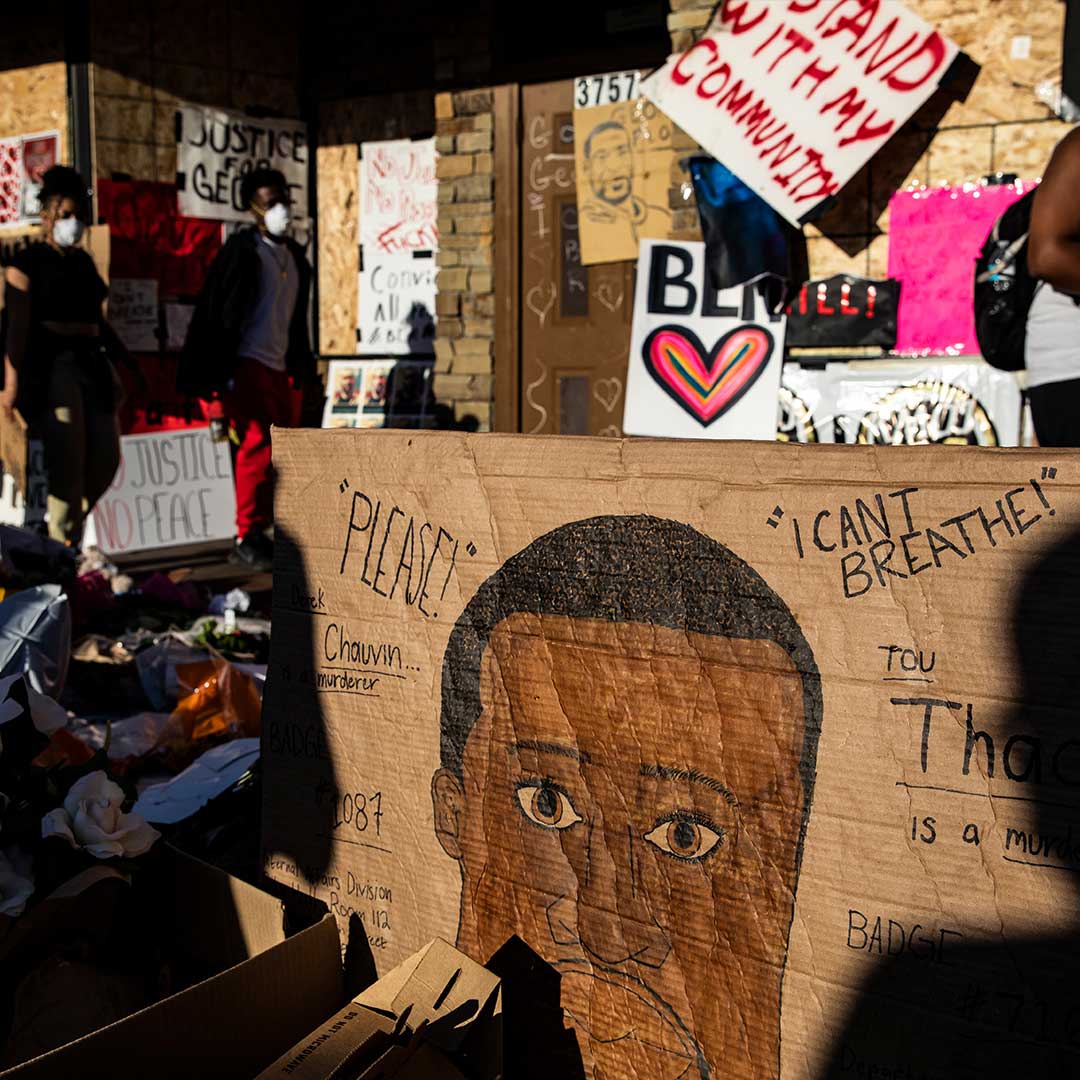 PHOTO: DAVID GUTTENFELDER/NATIONAL GEOGRAPHIC IMAGE COLLECTION A memorial at the spot where George Floyd was killed in police custody.

"I moved to Minneapolis after 20 years living outside of the USA," Guttenfelder wrote on Instagram in June. "I live here, but the truth is that until last week I'd never stood on the corner where George Floyd died, just 10 minutes away from my house. 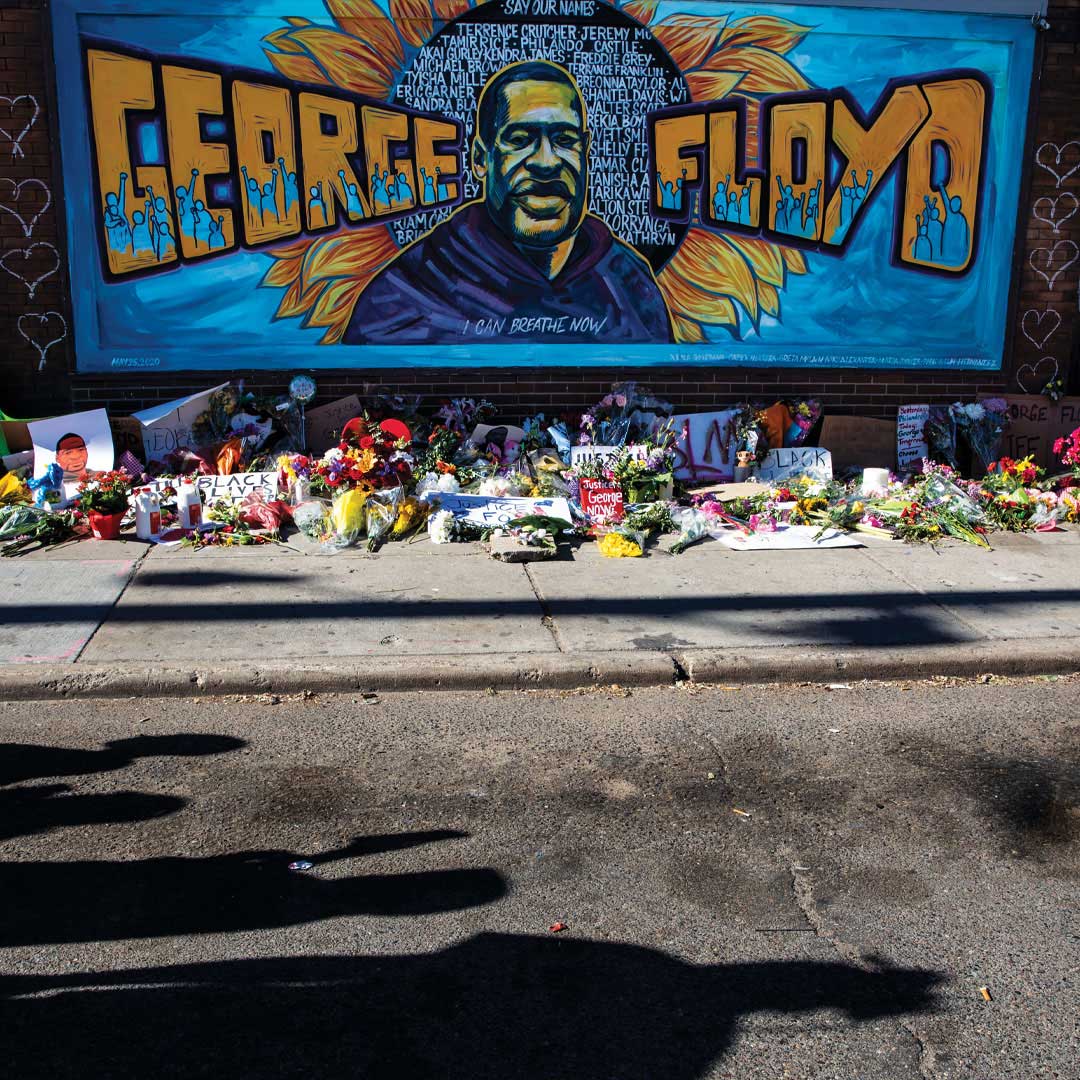 "Over these past days, so much has been laid bare to me about my city, and about my life and responsibilities here—as a documentary photographer and as a person. On May 25th, I felt only shame. Today, I also feel great love and pride for Minneapolis." 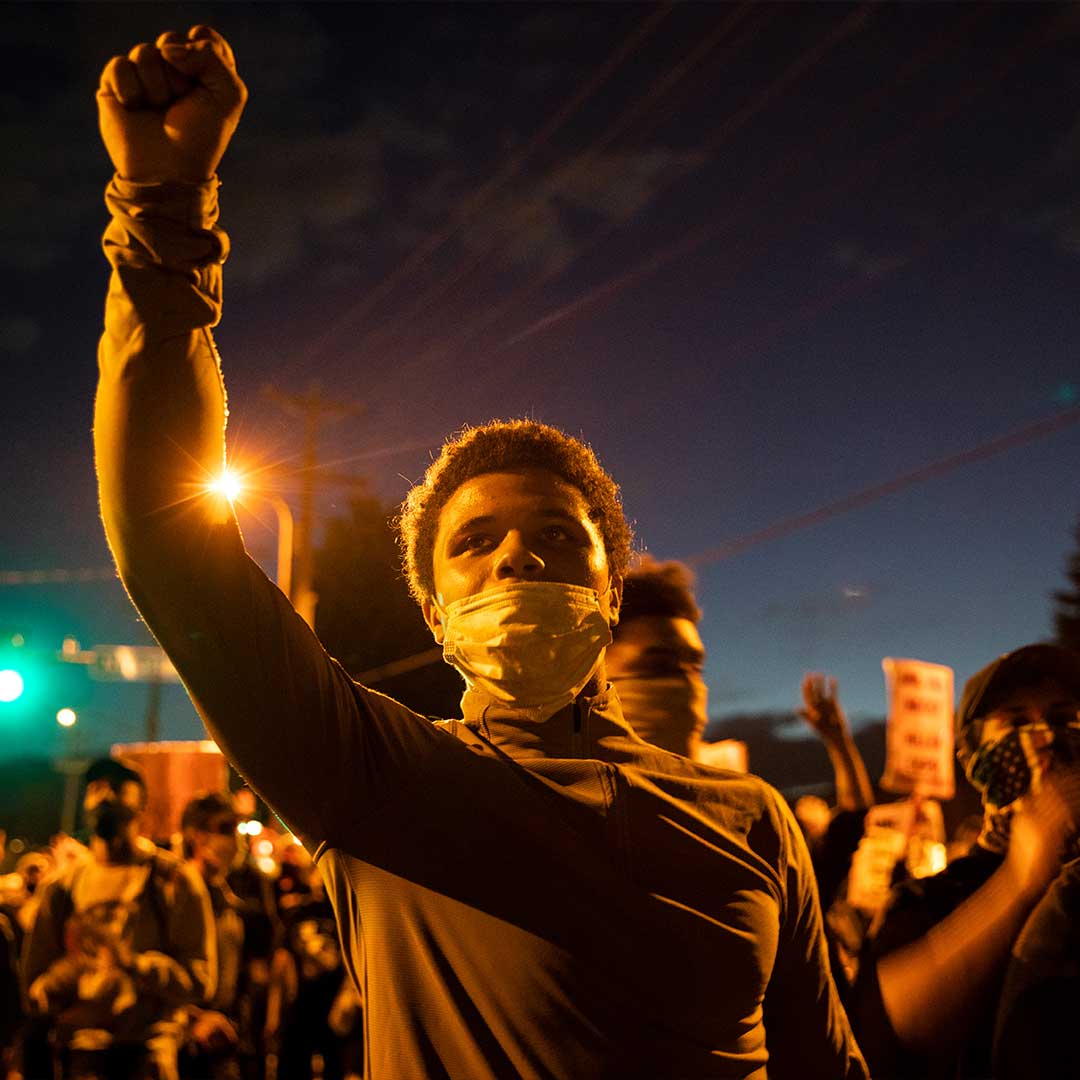 Guttenfelder's lens captured the outpouring of grief for Floyd, violent clashes between activists and police, burning buildings, and marches for justice. At Floyd's memorial service, Guttenfelder documented the eulogies and grief-stricken pallbearers carrying the casket from the chapel.

An eight-time World Press Photo Award winner and seven-time finalist for the Pulitzer Prize, Guttenfelder earned degrees in anthropology and journalism and mass communication at the UI while working at The Daily Iowan. He spent his early career stationed in war zones in Africa for the AP. Later assignments took him to the Mideast and Asia, and in 2011 he became the only Western photographer to gain regular access to North Korea. 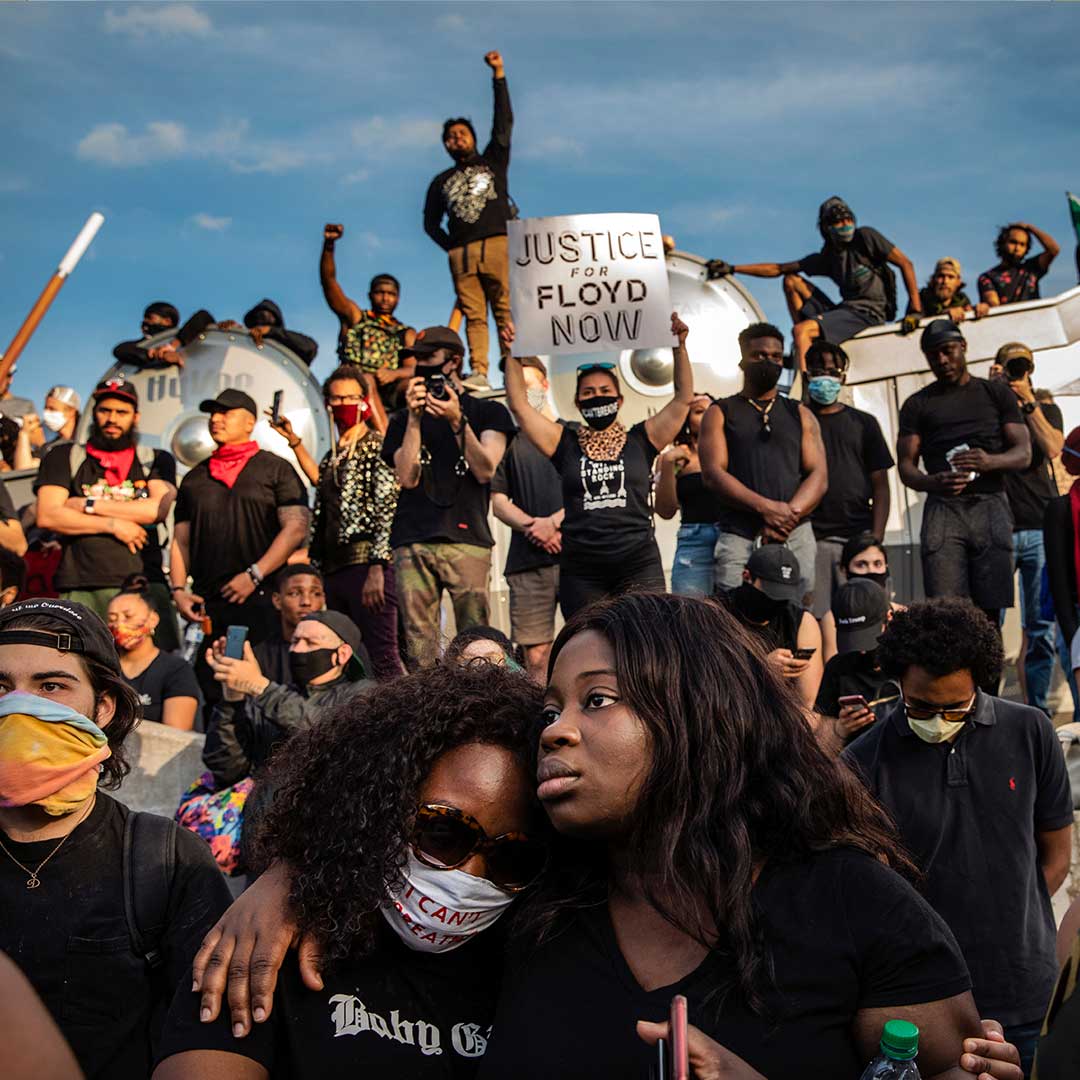 Guttenfelder says that global perspective equipped him to cover conflict even when it hit close to home. As he put it in National Geographic, "It helps that I have seen pain, suffering, and rage in other places, that I can relate to what's happening and why it's happening." 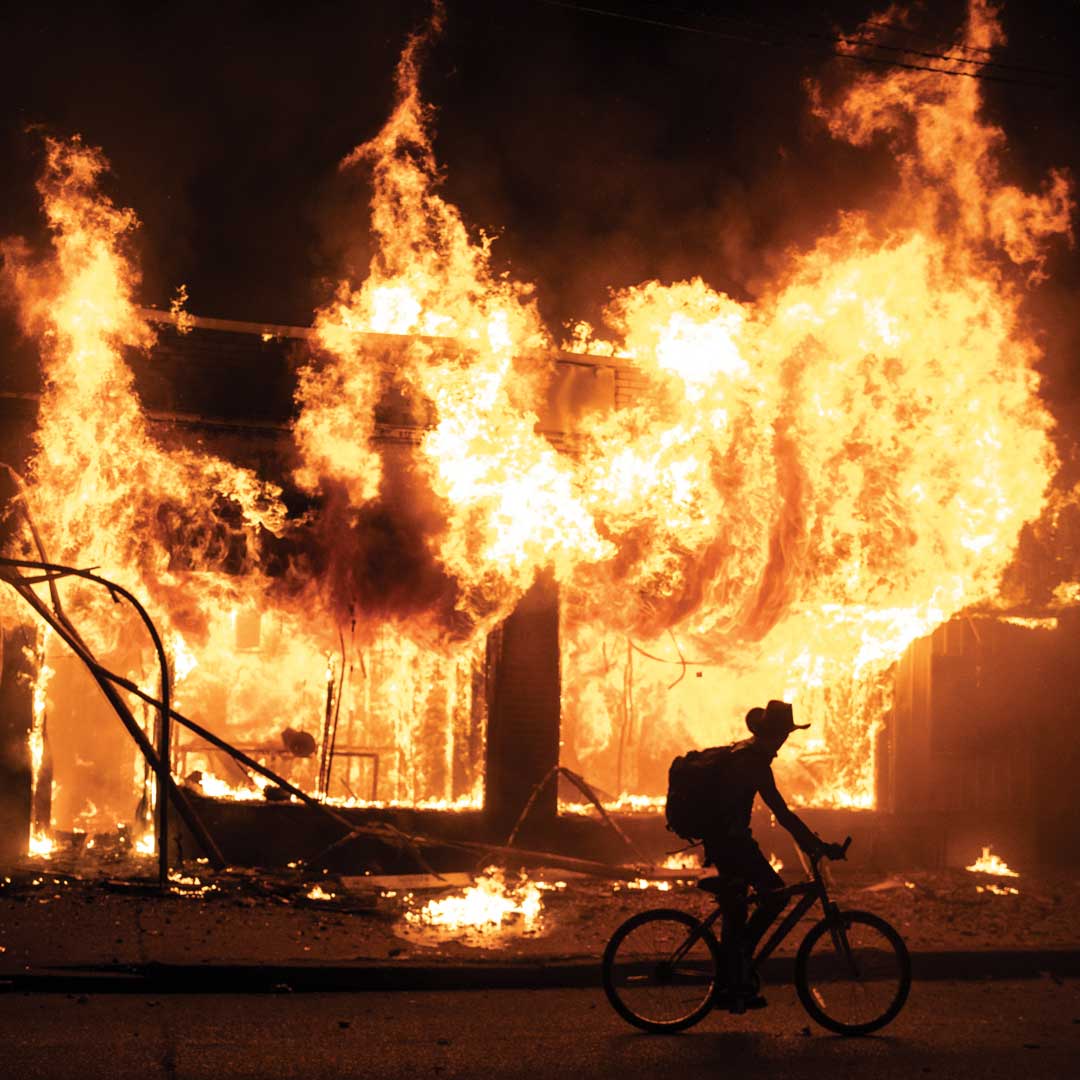 PHOTO: DAVID GUTTENFELDER/NATIONAL GEOGRAPHIC IMAGE COLLECTION In this David Guttenfelder photo, a bicyclist rides past a burning building in Minneapolis following George Floyd's death.
Join our email list
Get the latest news and information for alumni, fans, and friends of the University of Iowa.
Sign up now 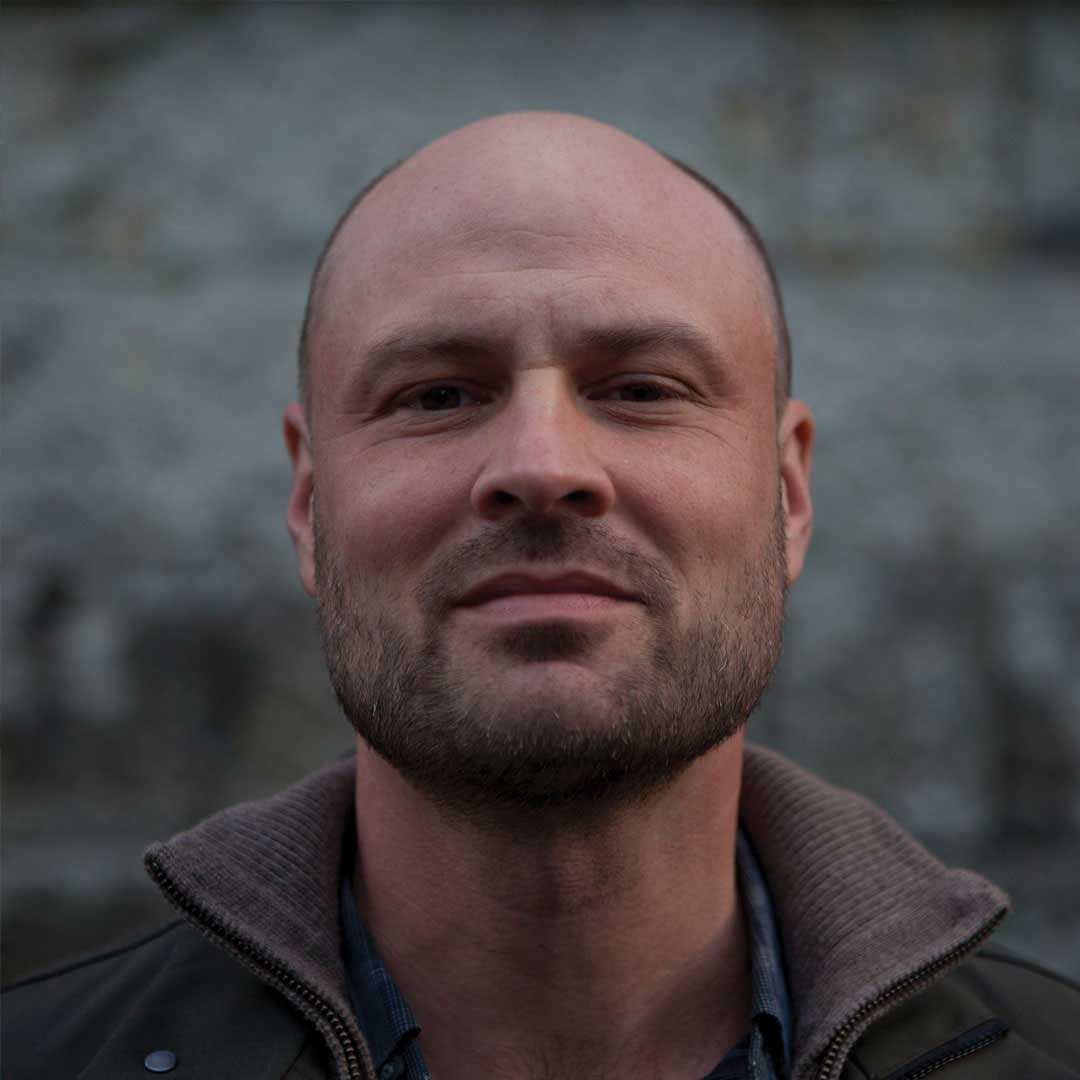