The photo appeared in a local newspaper during Iowa City's massive flood of 1993. As the Iowa River overtook Lower City Park, UI senior David Guttenfelder jumped in a rowboat and headed for the park's signature wooden merry-go-round. He climbed aboard the horses and positioned himself so as to closely capture the colorful carousel submerged in murky water.

Simultaneously beautiful and haunting in its simplicity, the image rendered the flood's devastation in a way unlike any other photograph. Regarding his creative approach, says Guttenfelder, 93BA, a seven-time winner of the World Press Photo Award and seven-time finalist for the Pulitzer Prize: "I'll probably never be the best photographer in town, but I'll be the one who will go where no one else is willing to go."

Traveling where few fear to tread—that's the hallmark of David Guttenfelder's accomplished post-graduation career, which began in East Africa. Guttenfelder then went on to spend the next 20 years as an Associated Press photographer in places like Nairobi, New Delhi, Jerusalem, and Tokyo. In that time, among his assignments, he's covered the wars in Iraq and Afghanistan, the aftermath of the 2011 tsunami in Japan and the 2013 typhoon in the Philippines, the atrocities of Rwandan genocide, and the horrifying effects of Agent Orange on a generation in Vietnam.

In introducing him as a speaker at last spring's UI School of Journalism & Mass Communication symposium, "From Local to Global: Photojournalism in the New Millennium," friend and fellow photographer Danny Wilcox-Frazier, 93BA, 04MA, noted that whenever the world experienced a historic news story, "Dave sprinted to the heart of it all."

During his visit, Guttenfelder spoke about his Instagram project documenting daily life in North Korea, one of the least understood, most mysterious countries on earth. "I wanted to show reality and truth and to make connections," says Guttenfelder, stressing digital photography's immediate ability to inform and educate. "I shot life around me, which is as powerful as anything else."

Guttenfelder recently stepped down from his post as chief Asia photographer for the Associated Press. Today, he is back in the U.S. as a National Geographic Society fellow. Charged with capturing the relationship between people and wildlife in Yellowstone National Park—Guttenfelder finds himself among Wyoming's wild places, photographically exploring his own country and culture for the first time in his professional career.

In honor of his return home, Iowa Alumni Magazine proudly presents these prized photographs from the David Guttenfelder collection. 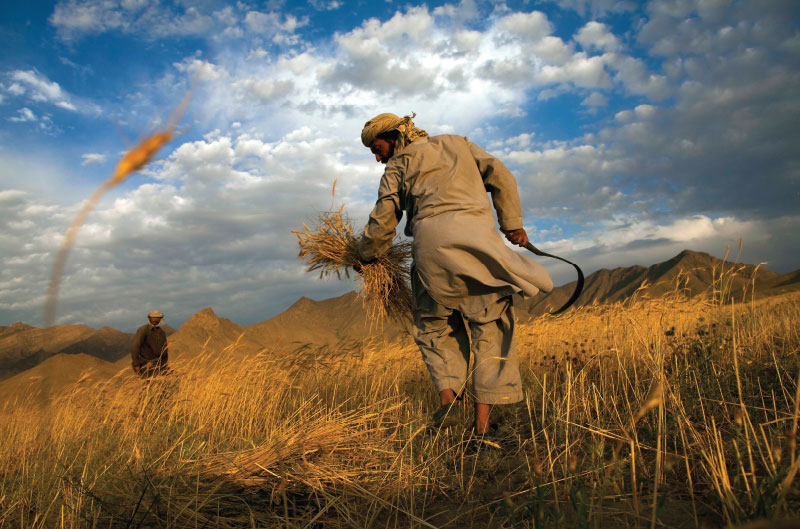 A farmer harvests wheat outside Kabul, Afghanistan—a moment of unmistakable beauty in a troubled nation. 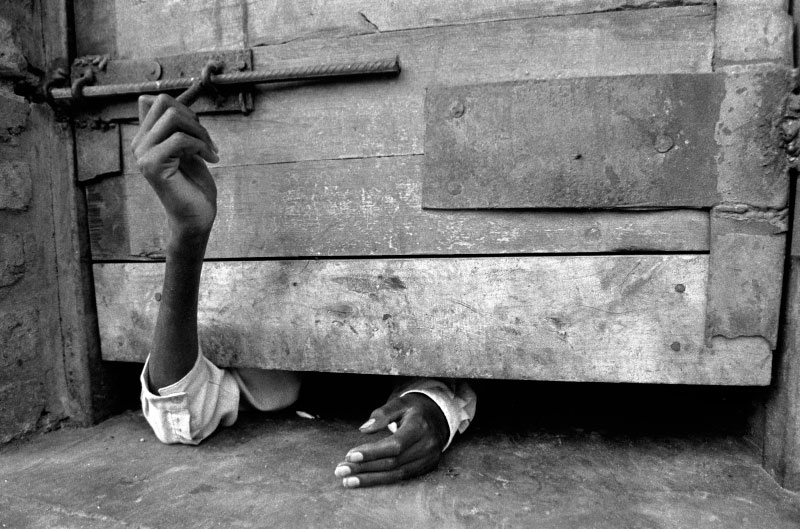 A man tries to unlock a cell door at a hospital in Kigali, capital city of Rwanda, in 1994. As genocide spread across Rwanda that year, doctors and staff of the main psychological hospital in Kigali fled or were killed, leaving patients to care for themselves. 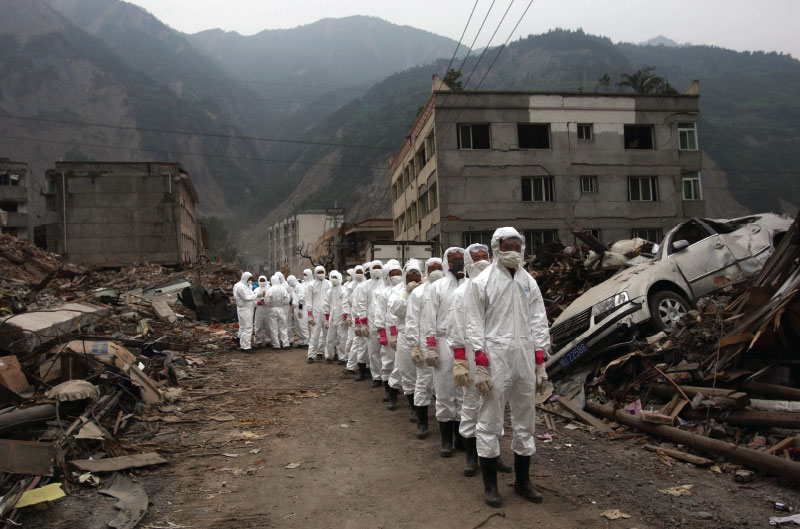 Chinese rescue workers line up to leave as authorities prepare to destroy earthquake-damaged buildings in China's southwest Sichuan province. In May 2008, an 8.0 magnitude earthquake hit the region, killing an estimated 90,000 people, leaving millions homeless and causing billions of dollars in damage. 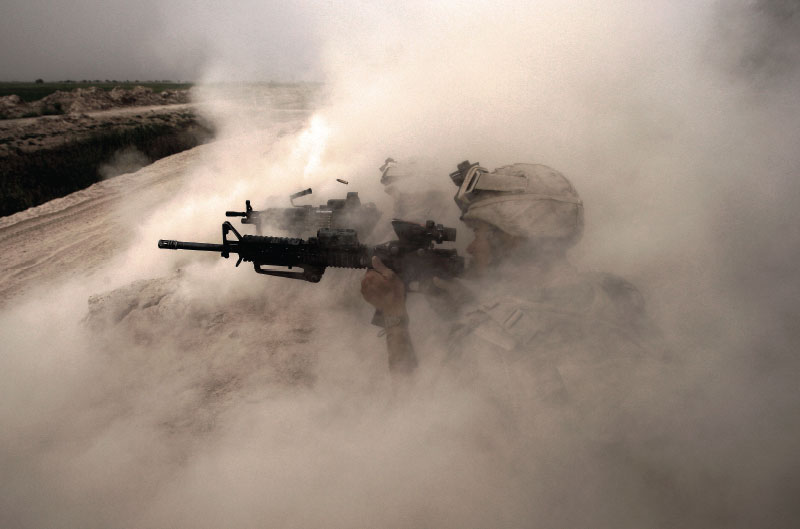 U.S. Marines from the 24th Marine Expeditionary Unit return fire on Taliban positions near the town of Garmser in Helmand Province, Afghanistan, May 2008. 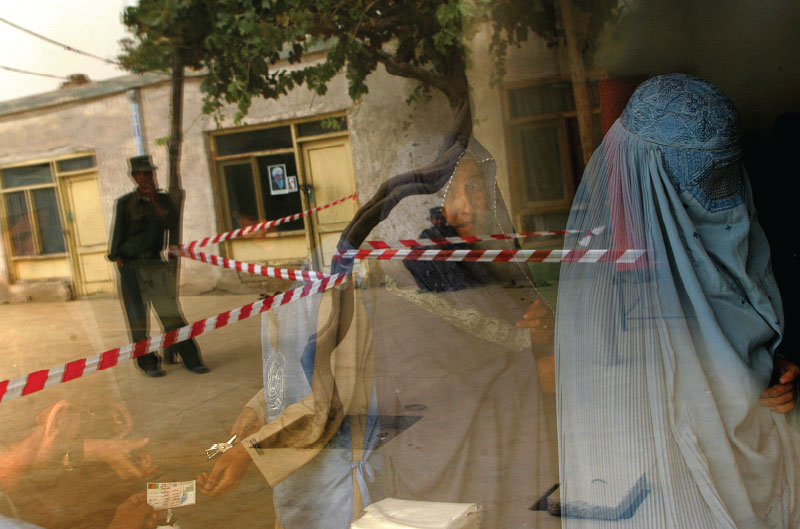 Women line up to cast their votes at a small Shiite mosque in western Kabul, a photo that won first prize in the daily life category of the 2004 World Press Photo Awards. 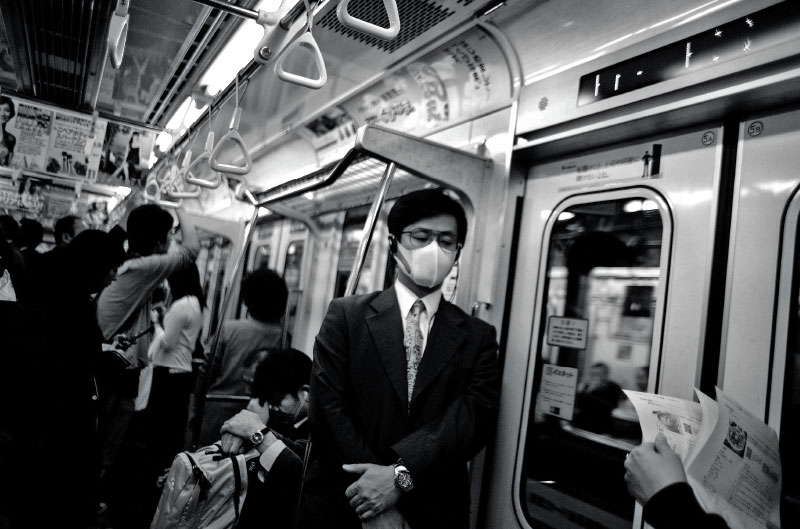 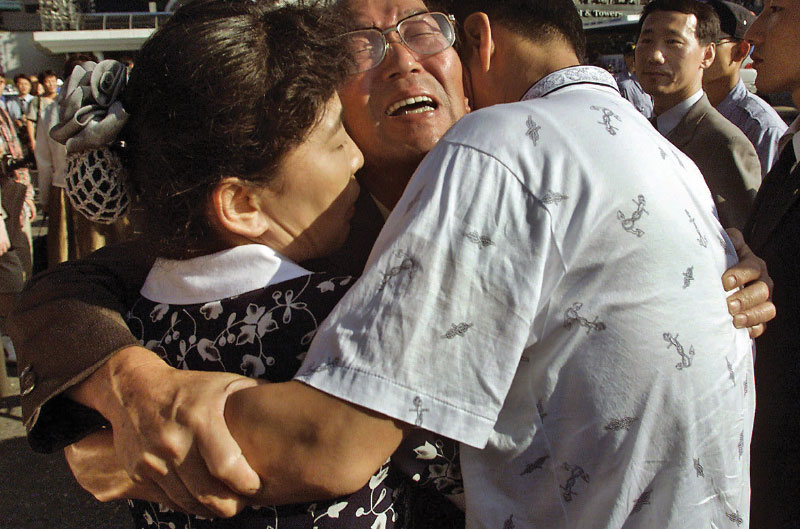 A North Korean visitor bids a tearful goodbye to his South Korean family as he boards a bus for the airport in Seoul, South Korea. They were among 100 families permitted brief, four-day inter-Korea reunions in August 2000 after being separated for a half century. The emotional series earned Guttenfelder recognition as a Pulitzer Prize finalist in 2001. He later received additional Pulitzer accolades in 2012 for the "extraordinary portrayal of life inside reclusive North Korea." 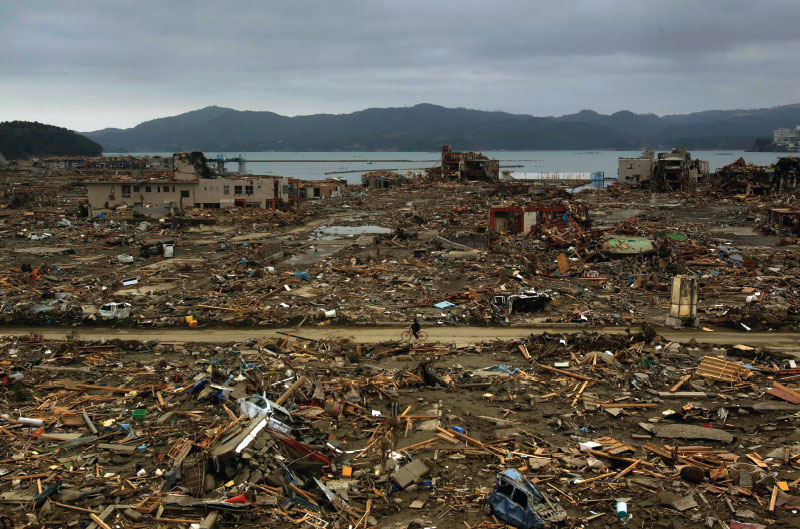 A powerful earthquake off of Japan's main island of Honshu in March 2011 unleashed a devastating tsunami that destroyed multiple coastal areas. The disaster also damaged the Fukushima Daiichi power plant, resulting in the second worst nuclear disaster in history. Here, a Japanese survivor of the earthquake and tsunami rides his bicycle through the leveled city of Minamisanriku in northeastern Japan, March 2011. 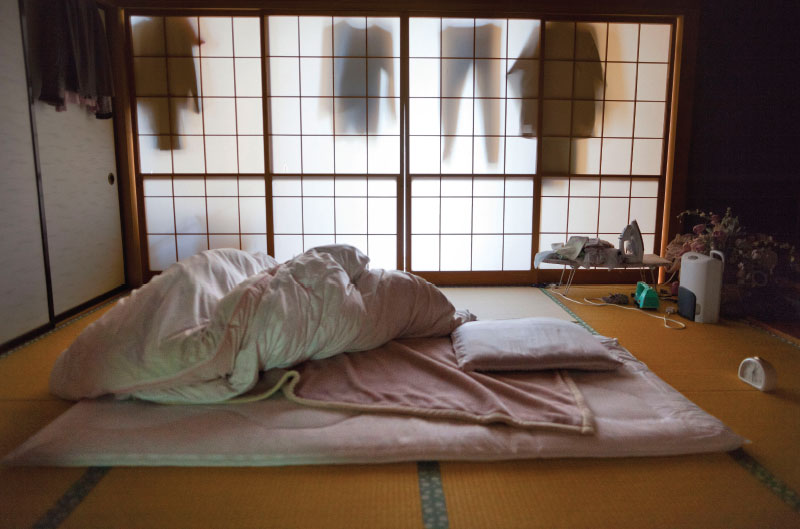 A bed is left abandoned and messy inside the exclusion zone after Japan's tsunami-triggered nuclear disaster—and resulting evacuation that required tens of thousands of people to flee their homes. 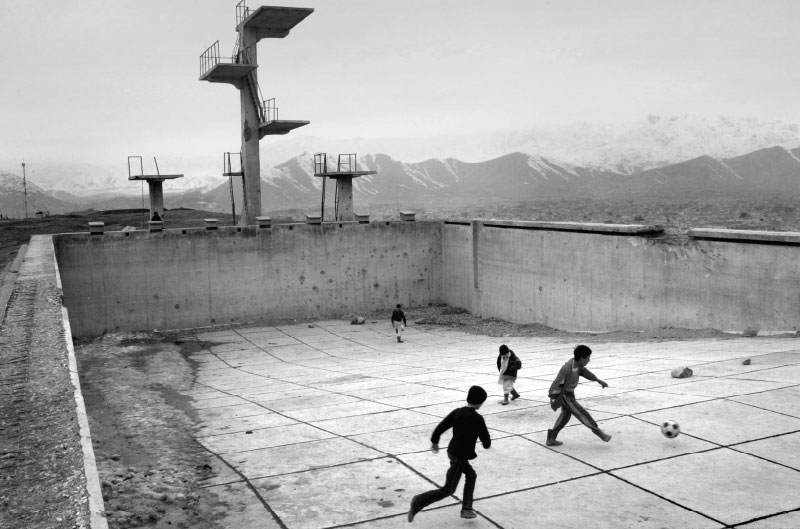 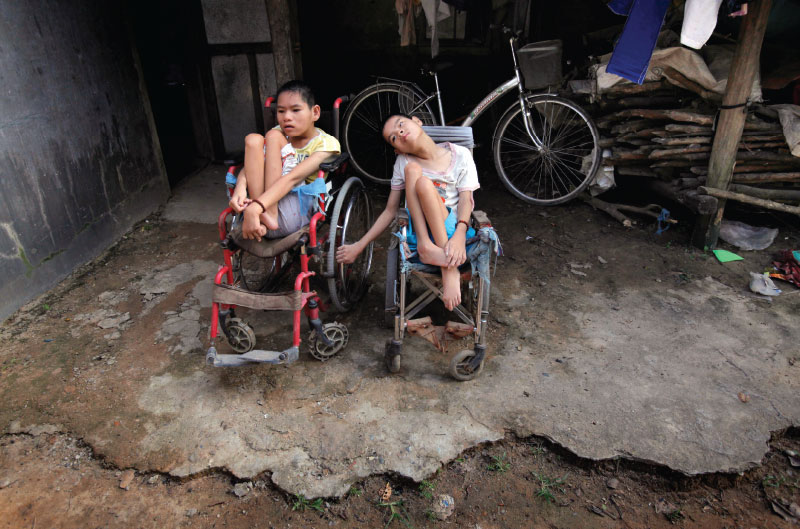 Nguyen Thi Tai and Nguyen Thi Thuyet sit in their wheelchairs outside their family home in the village of Cam Tuyen, Vietnam. The two young women were born with profound physical and mental disabilities that the family attributes to Agent Orange used during the Vietnam War. For his series of work about the toxic legacy of Agent Orange, Guttenfelder was a 2008 Pulitzer Prize finalist in feature photography. 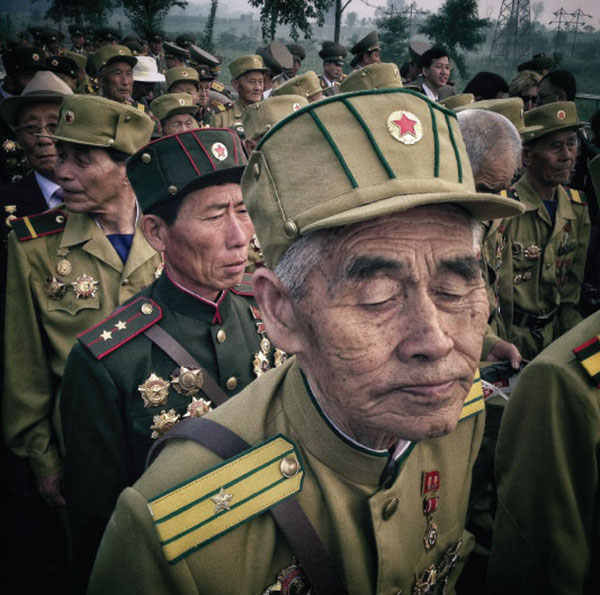 In this photo taken with an iPhone, North Korean veterans enter a ceremony marking the 60th anniversary of the signing of an armistice that ended the Korean War, July 2013. Guttenfelder spent years documenting daily life in North Korea through his Instagram project and trained local amateur photographers to continue the project after he left. 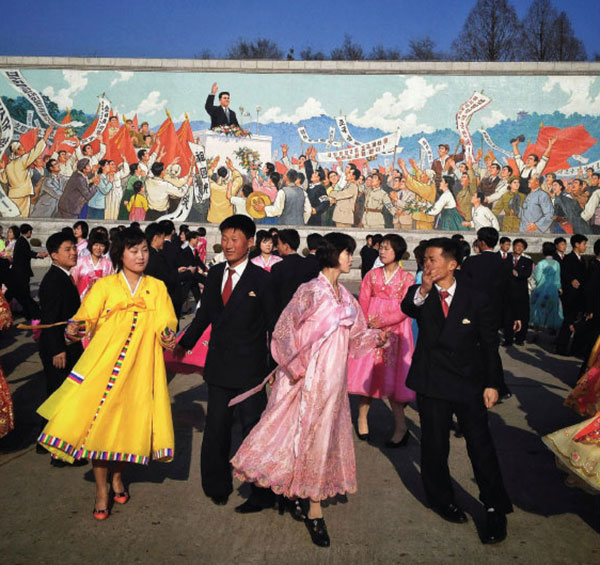 A Window into Contemporary China 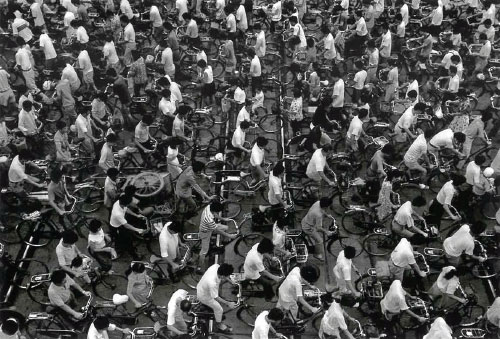 For nearly five decades, China Daily senior photographer Wang Wenlan has documented China's rapidly changing society and culture, covering everything from the end of the Cultural Revolution to the 2003 SARS epidemic and 2008 Beijing Olympic Games. Now renowned as one of China's top photojournalists, Wang debuted his work overseas for the first time this past spring as part of the UI's symposium, "From Local to Global: Photojournalism in the New Millennium."

he exhibition, held in the UI School of Journalism and Mass Communication's Resource Center Gallery, depicted the clash between tradition and modernity in post-revolutionary China. A social-political movement to promote communist ideology, the Cultural Revolution ended with Community Party Chairman Mao Zedong's death in 1976. Afterward, China began opening to the outside world and has since shifted to a market economy that was stifled during the Cultural Revolution. Wang's photos from the past were displayed side-by-side with scenes from the present: fishing villages beside sprawling skyscrapers and the transformation of Shanghai rush hour from a bicyclist's to a motorist's nightmare.

Wang first became a photographer in the 1970s, using paper left over from printing Mao's portraits to develop pictures taken on a Soviet camera. In 1981, Wang joined the staff of the national English-language newspaper, China Daily. That's where he met UI journalism professor Judy Polumbaum, who invited him to participate in the recent symposium. Although he speaks little English, Wang said through a translator of his Western debut, "Art has no boundaries of language and culture." He also added that having his work displayed in the United States is "part of the Chinese dream."

"I want to construct an image of China for foreigners," said Wang, who serves as deputy president of the Chinese Photographers Association. "Because China is complicated, I have to represent that complexity in my work."