By Josh O'Leary
The Hawkeyes set the tone—and the tune—at the plate. 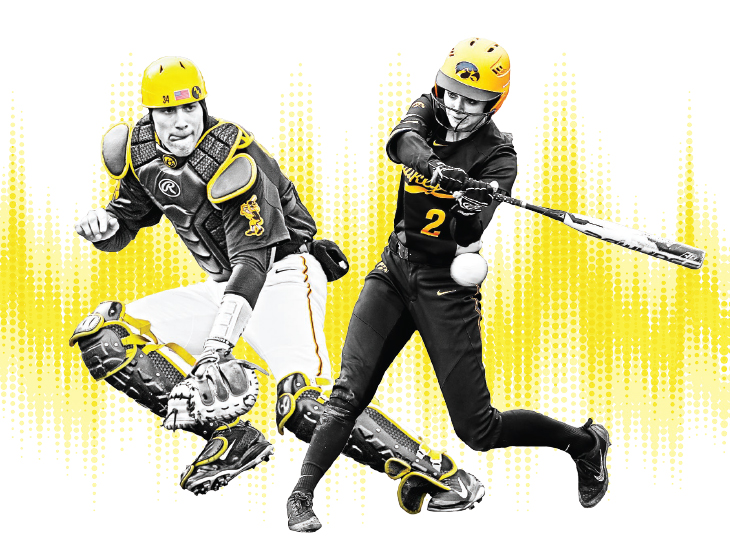 Forget old-timey organ music. Nothing gets a batter's adrenaline pumping and the crowd energized quite like a pitch-perfect walk-up song. For baseball and softball players, selecting an at-bat anthem is no small matter. First off, it's a rare chance in a team sport to let their personalities shine. But more importantly, the right song when striding to the plate can give a batter extra motivation to knock the cover off the ball. From Kanye West to Panic! at the Disco, here are a few of the tunes that pumped from the speakers at Duane Banks and Bob Pearl fields this past season.

Editor's note: Some of the songs below may contain explicit lyrics.

A fleet-footed Texan, Bogar couldn't have picked a more appropriate walk-up track. The Hawkeyes' lead-off hitter is virtually unstoppable on the base paths, leading Iowa in steals and giving opposing catchers nightmares all season long. In a win against Fordham she swiped three bases and drove home three runs.

One of the Hawkeyes' top sluggers, Martin turns to a '90s hip-hop classic for inspiration. The Altoona, Iowa, native spent his first two seasons at Southeastern Community College, but his "next episode" has been his best yet: fueling the Hawkeye offense with his ability to hit for both power and average. Among his many highlights was a 4-for-5 outing against Illinois State.