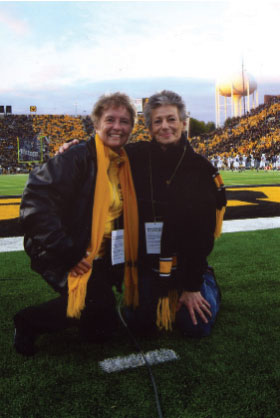 Standing inches away from Coach Kirk Ferentz and the Iowa football team as they swarmed the Kinnick Stadium field before the 2010 Penn State game, Lou Meyer felt chills shiver down her back.

Her husband, Gregory, 79BA, 88MBA, had passed away before he could enjoy this thrilling Hawkeye moment, but Meyer wore his Iowa leather jacket in his honor. Meyer’s best friend, Shirley Wright, who was in the late stages of ovarian cancer, stood by her side. “We both knew it was an experience of a lifetime and likely the last time we would attend a Hawkeye game together,” says Meyer. “It was special, because it was wrapped in the emotion of [my husband’s] passing and being with my best friend. It was an experience that warms your heart.”

Meyer earned pre-game sideline passes through Iowa Rewards, a credit card that invites Iowa fans to earn points on everyday purchases for cash, travel, and exclusive Hawkeye perks, such as game-used items, courtside seats at Carver-Hawkeye Arena, and VIP tours of Kinnick Stadium. Using the card helps support the programs and services of the UI Alumni Association and UI Athletics. Meyer says, “I can get points on any credit card, but I can’t get the experiences I had through any other card except Iowa Rewards.” 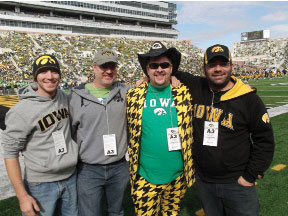 Fans who earn sideline passes hear the smack of players’ pads as they practice before the game, witness the focus and intensity in Ferentz’s eyes before he takes the field, and experience the stadium from a perspective usually reserved for coaches, players, and officials. “We couldn’t stop smiling,” says Matt Arnold*, 93BA, who surprised a Marine friend about to be deployed to Afghanistan with pre-game sideline passes to this past season’s Louisiana-Monroe match-up. “Even thinking about it now, I can’t stop.”

As for Meyer, even though her friend passed away this past October, the memories of their day together on the Kinnick Stadium field will endure. “It was a first-class experience,” says Meyer, who took the photos from that game to Wright’s funeral. “I expect nothing less from the Hawkeyes.”

For information about the rates, fees, other costs, and benefits associated wit the use of this credit card, visit the website or call the number listed above.

This credit card program is issued and administered by FIA Card Services, N.A.