By Josh O'Leary
8 minute read
Fourteen years after the University of Iowa saved its world-class art collection from the flood, the new museum welcomes home its masterpieces and unveils stunning new additions.

When visitors stroll through the second-floor galleries of the new University of Iowa Stanley Museum of Art for the first time this month, they’ll be greeted by some familiar names. There’s Henri Matisse in one gallery. Joan Mitchell in another. Andy Warhol around the corner. And, of course, holding court at the center of it all, is Jackson Pollock.

One of the nation’s premier academic art collections is finally back in Iowa City, where it’s inspired generations of students and art lovers. In 2008, museum staff and volunteers raced to evacuate the university’s art collection before floodwater swamped the original building. Now Iowa’s collection has a new home in a modern dark-brick and airy-glass museum next door to the UI Main Library and Gibson Square Park. Open to the public six days a week with free admission beginning Aug. 26, the three-story teaching museum serves as a cultural and learning destination for not just students and faculty, but Iowans of all ages.

The museum’s inaugural exhibition, which fills the second-floor gallery space, is titled Homecoming. Proudly back on display is the Stanley’s signature trove of midcentury modern paintings, one of the nation’s finest collections of African art, and its deep library of ceramic and print work. At the same time, curators have been busy acquiring new pieces for its opening, filling holes in its collection from underrepresented groups, including women and contemporary Black artists.

“The challenge was to bring back the familiar, but also present the new in a way that harmonizes,” says Lauren Lessing, who has overseen planning and construction of the $50-million museum since becoming its director in 2018. “One will find moments of grace, moments of beauty, moments that ask tough questions, moments that are thought-provoking. There’s a lot here for everyone.” 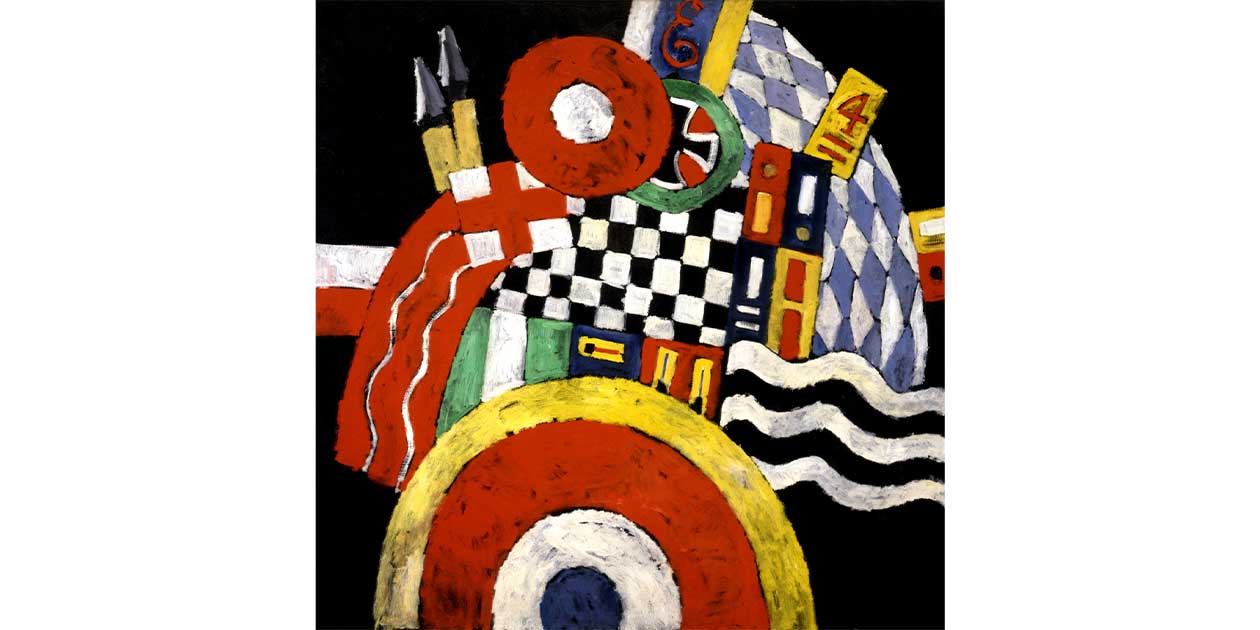 A pioneer modernist and one of the first Americans to explore cubism, Hartley painted E after visiting Berlin in 1913 and eventually moving to Germany for a time. This is one of 14 paintings in his “German Officer” series, which reflected Hartley’s immersion in the European avant-garde scene of the 1910s and his fascination with Germany’s military pageantry in the early days of World War I. A tribute to Hartley’s close friend, Karl Edmund von Freyburg, a German officer who was killed in battle in 1914, E features symbols like the Iron Cross and the number 4 for the fourth regiment of the Kaiser’s guards. Ultimately, the outbreak of the war deeply troubled Hartley, and he left Berlin in 1915. 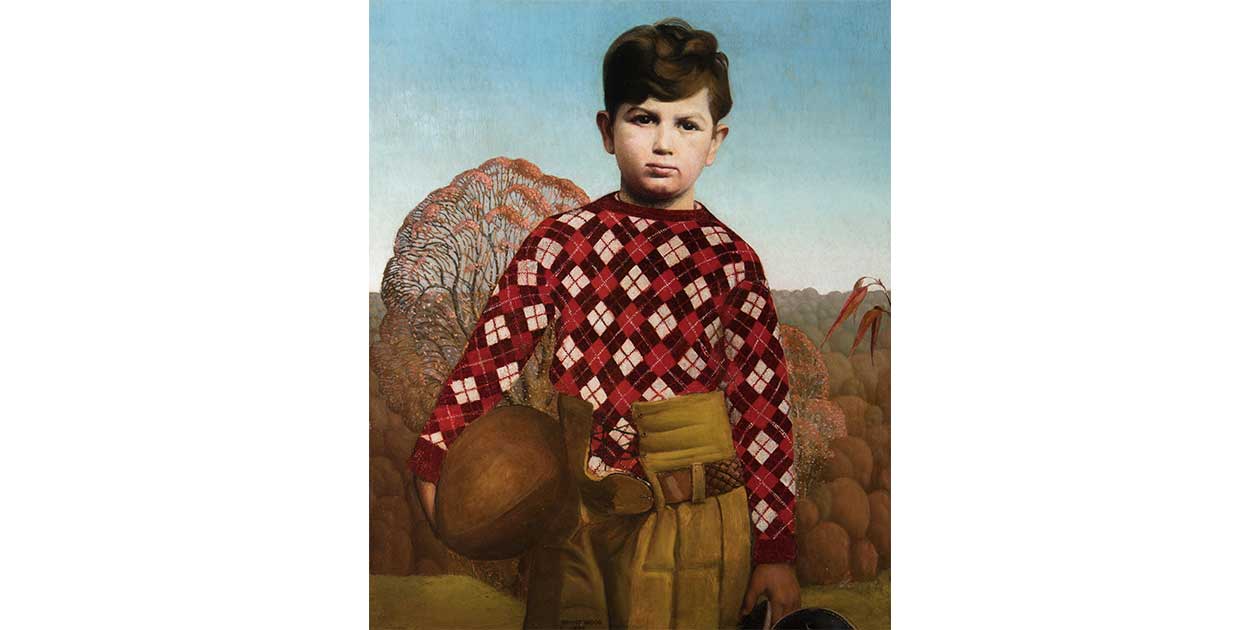 Considered Wood's most important portrait, the painting depicts a young Mel Blumberg (47BA) of Clinton, Iowa, whose mother commissioned Wood after the artist gained national attention for American Gothic in 1930. Not wanting to paint the boy in his Sunday best, inspiration struck for Wood when Blumberg burst into the room wearing a plaid sweater—or perhaps more accurately, an argyle sweater—and toting a football. The painting remained in the family until 1984, when Blumberg donated it to the UI, where Wood taught from 1934 through 1941. Plaid Sweater's layer of varnish had yellowed over the decades, but a 2018 cleaning and restoration revealed Wood's signature blue sky and the original vibrancy of the red sweater. The museum also owns the sweater itself, though its sleeves were later shortened so Blumberg could wear it on warmer days. 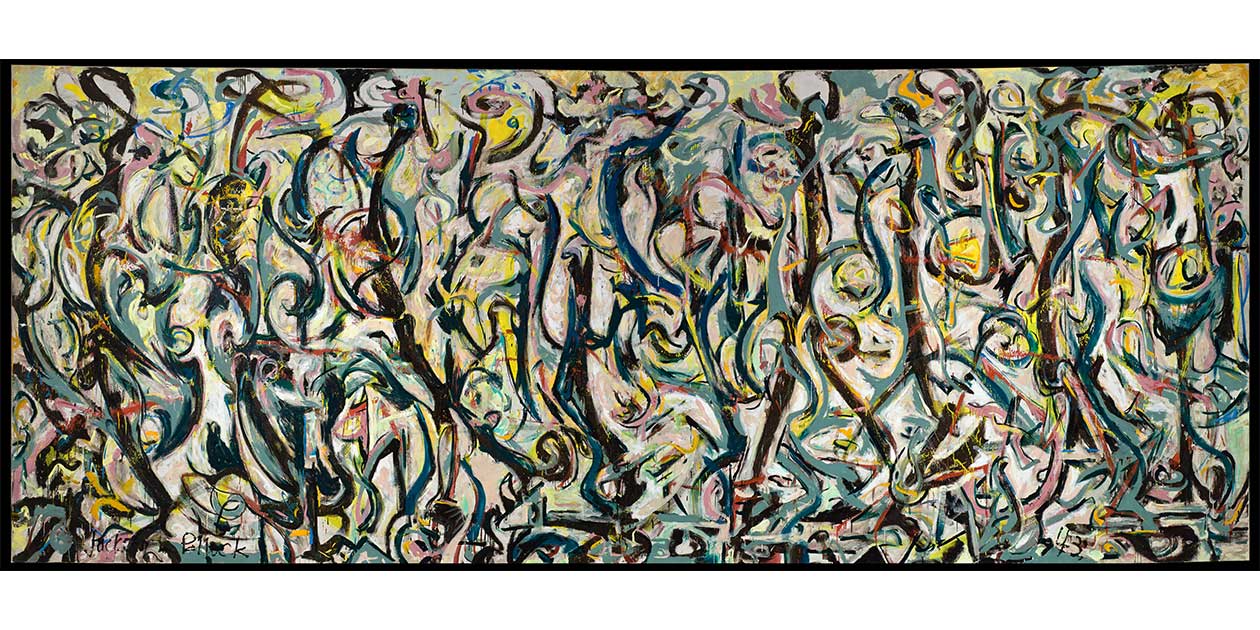 Pollock's largest painting, which was donated by New York art collector Peggy Guggenheim to the university in 1951, has long been the crown jewel of the Stanley's collection. Representing a pivotal moment in Pollock's transformation from surrealism to abstract expressionism, the 8-by-20-foot canvas stands as one of the painter's greatest achievements. Mural returns to Iowa for the first time since undergoing a two-year restoration and technical study at the J. Paul Getty Museum in Los Angeles, where experts debunked the myth that Pollock painted the monumental piece in just one frenzied night. Over the past decade, Iowa loaned the painting to museums around the world, with the international tour attracting more than two million visitors. 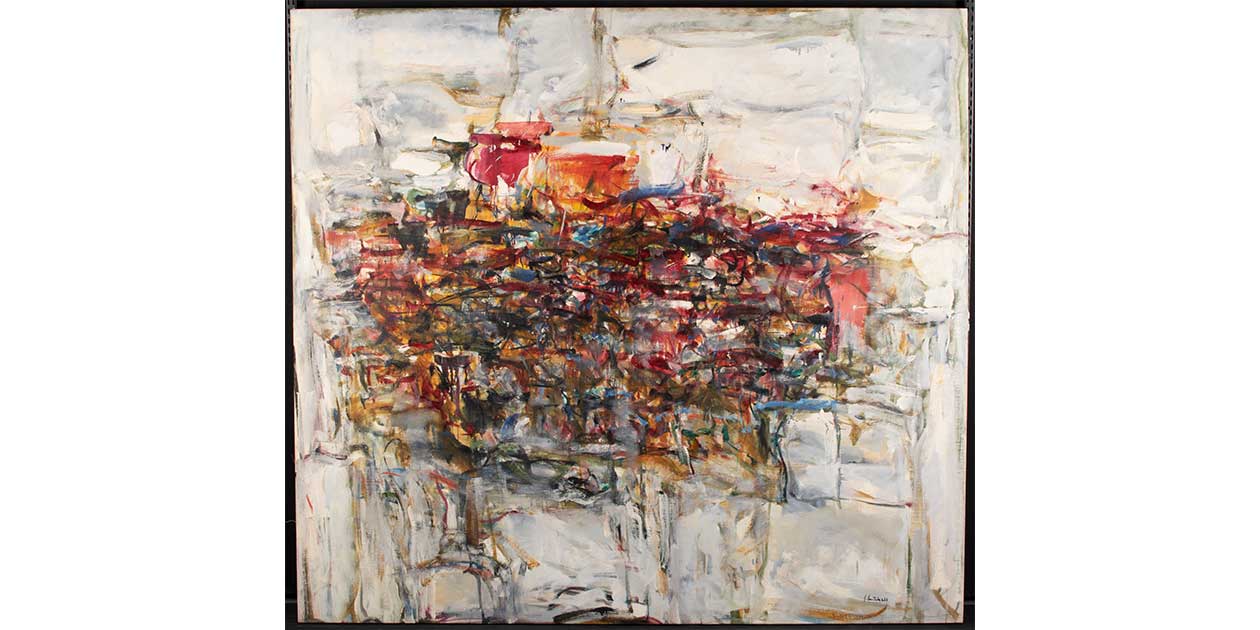 More than 5 feet tall and 7 feet wide, Mitchell's abstract painting was donated to the museum in 1974 and soon became one of the most important pieces in the Iowa collection. Mitchell was a leading figure in the male-dominated, postwar New York School of artists. With its daring, gestural brushstrokes and a prismatic palette, Red Painting No. 2 was among the pieces that earned the artist early acclaim. In 2017, the painting was sent to the Midwest Art Conservation Center in Minneapolis, where conservators cleaned the piece and stabilized areas of flaking. Mitchell took cues in her art from nature, and Red Painting No. 2 indeed carries whispers of a shimmering landscape—now restored to its original splendor. 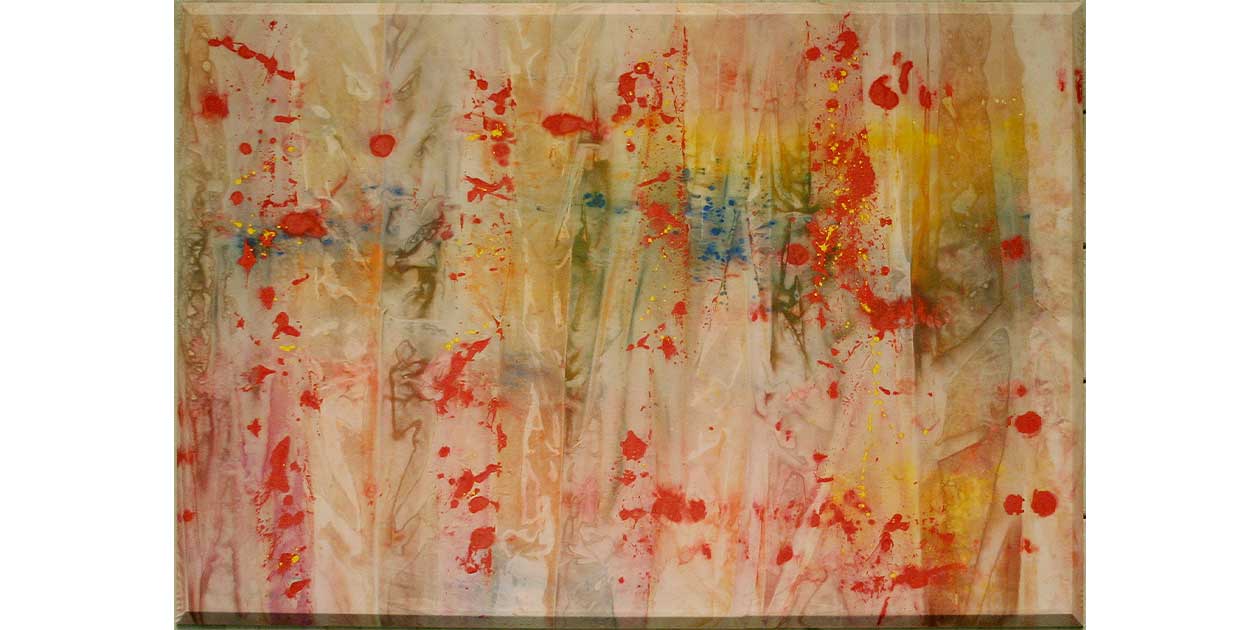 One of the largest pieces on display in the opening exhibition, Gilliam's painting stretches more than 9 feet high and 13 feet long. Purchased by the UI in 1971, museum experts say the piece was one of several created by Gilliam in response to the assassination of Martin Luther King Jr. in April 1968 and the social unrest that followed. Gilliam, who was considered one of the great art innovators in postwar America, used washes—paints thinned with water—to stain a canvas that he laid out on the floor. The artist then splattered it with vivid red paint before folding and unfolding the canvas like an accordion to create an unpredictable mix of color and markings. 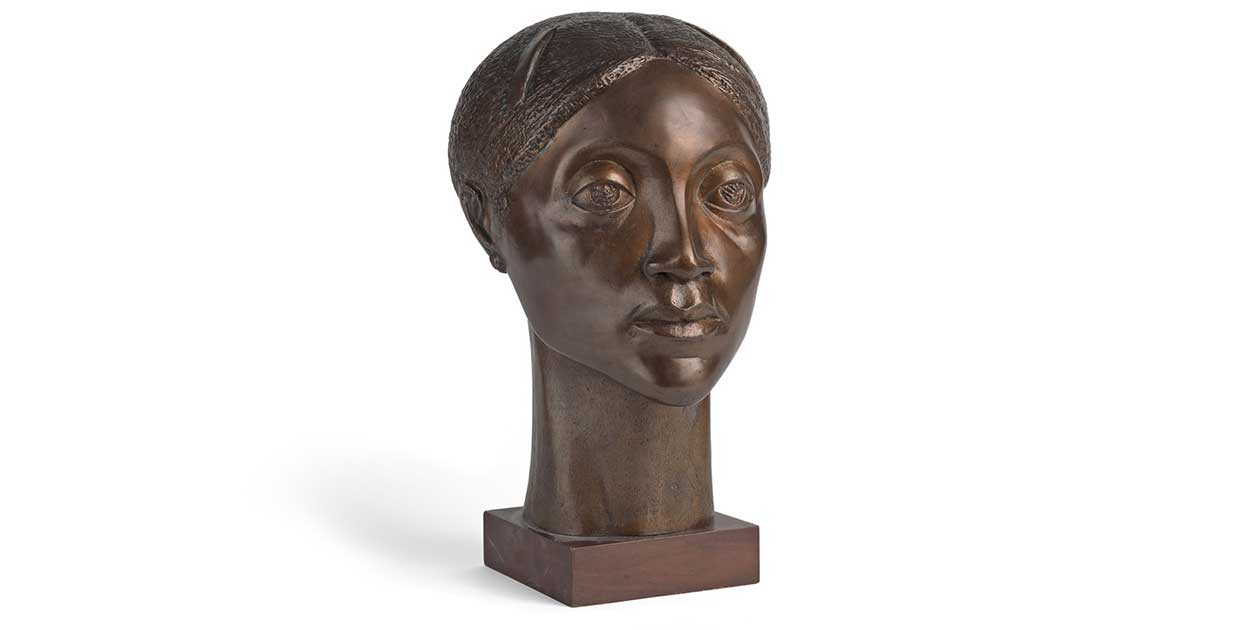 Catlett, who in 1940 became the first Black woman in the nation to earn an MFA when she graduated from the UI, is considered one of the most important printmakers and sculptors of the 20th century. Her renown has only grown in the decade since her death in 2012, including the UI naming its newest residence hall after her in 2018. This cast-bronze statue on a mahogany base is Catlett's portrait of Glory Van Scott, a performer and educator well-known for her work as a Broadway dancer in the mid-20th century. The museum purchased the bust—one of nine statues Catlett cast in the series—at auction earlier this year from a private collector with support from the Joyce P. Summerwill Art Fund. 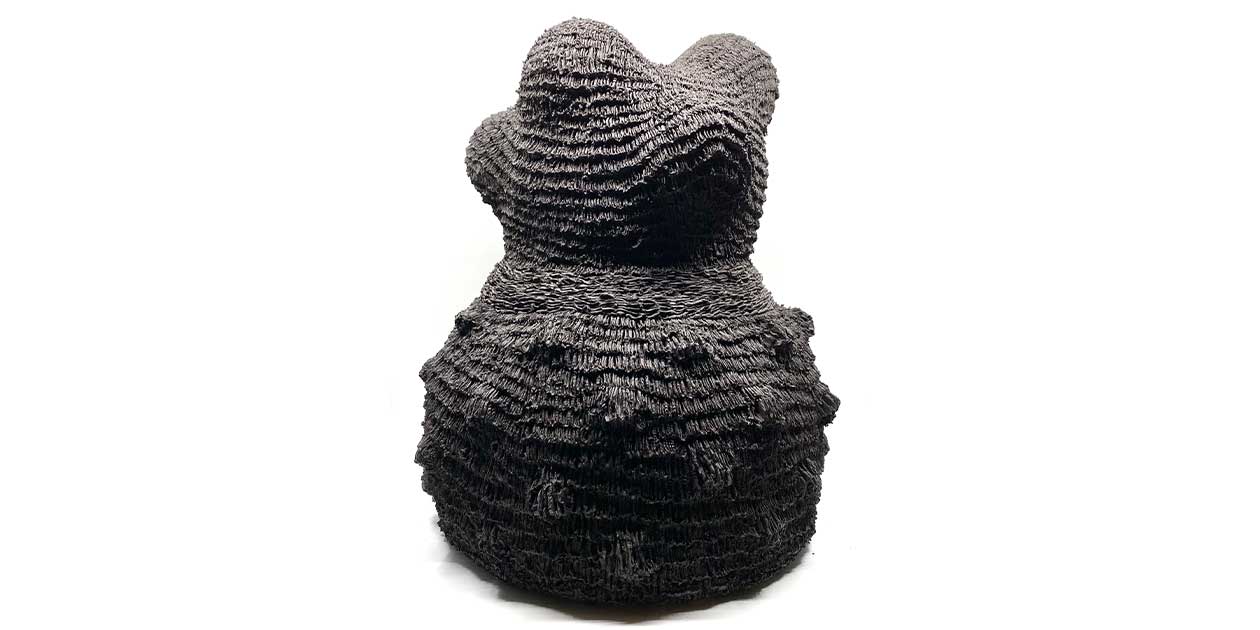 For its opening exhibition, the museum commissioned this ceramic sculpture by Hayes (19MA, 19MFA), who studied eight objects from Iowa's African ceramics collection for inspiration. The Georgia native is one of Iowa's most acclaimed recent graduates and a rising star who has had work exhibited at the Museum of Science and Industry in Chicago and included in the permanent collection of the Smithsonian Museum of American Art in Washington. Guardian, which stands a foot-and-a-half tall, is emblematic of Hayes' richly textured style that fuses African traditions with science fiction themes and hip-hop culture. 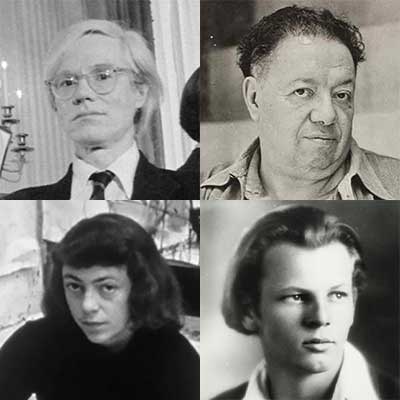 Warhol, Rivera, Mitchell, and Pollock are among the big names in the Iowa collection. 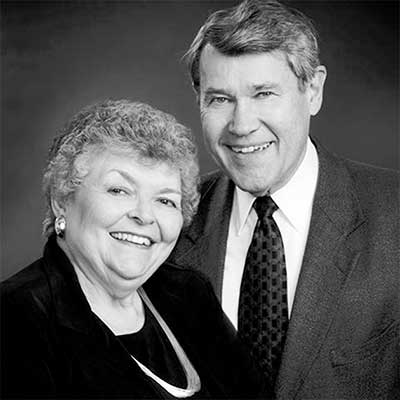 The Stanleys’ support for the museum began with a major donation of African art almost 40 years ago. 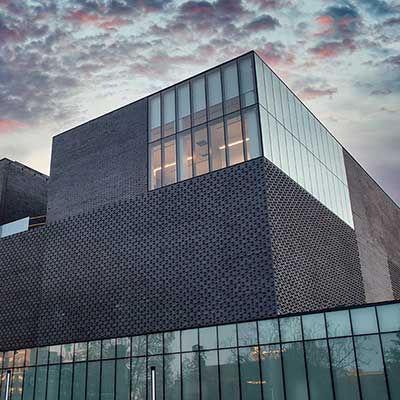 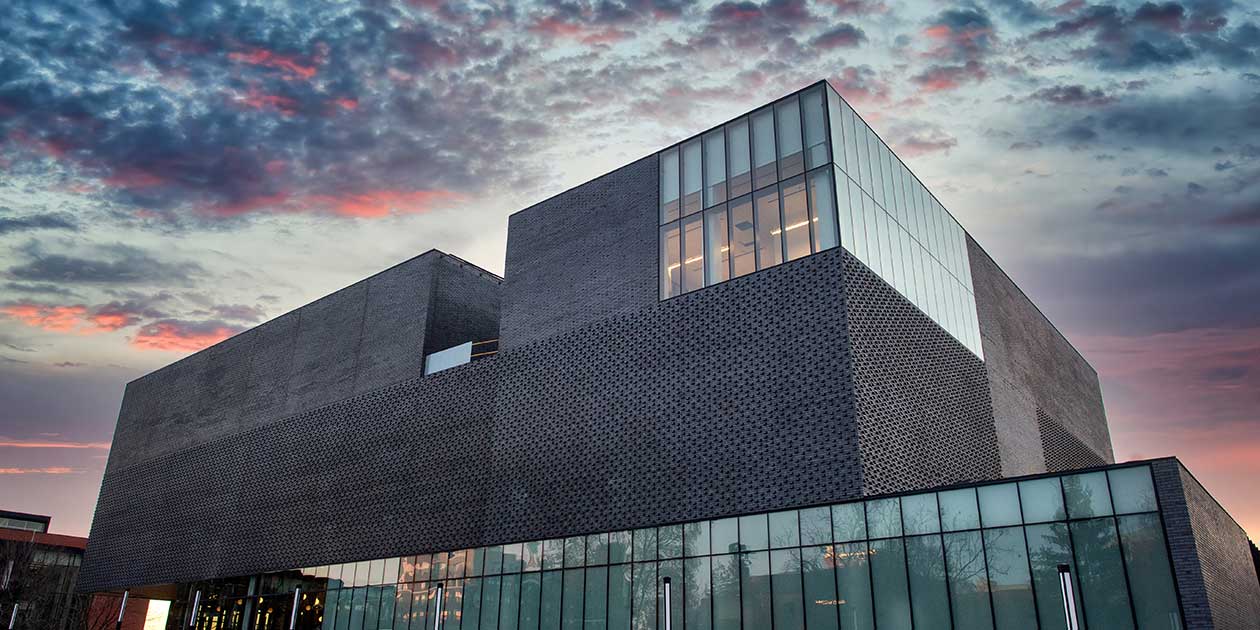