After Cancer Fight, UI Senior Gives Back with Dance Marathon

By Tyler Strand
2 minute read
The student organization's finance director knows firsthand what patients are up against. 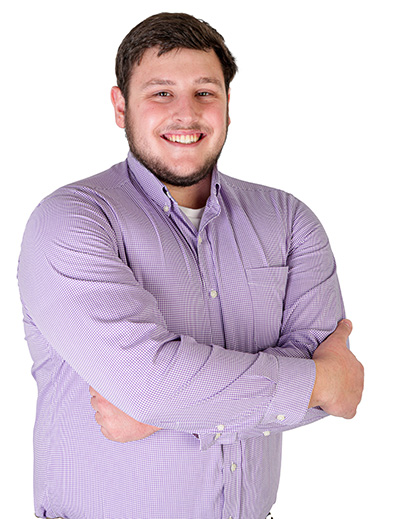 Joe Briddle began planning his future in Dance Marathon soon after his first experience at the Big Event. Then a high school senior, Briddle was enamored with the fun atmosphere and welcoming community of students who fundraised to support pediatric cancer patients and their families at University of Iowa Stead Family Children's Hospital. Briddle's love for numbers and involvement with Iowa City West High School's Mini Dance Marathon inspired him to one day become UI Dance Marathon's finance director. That dream came true last spring, despite a cancer diagnosis in December 2018 that put Briddle's plans on hold.

Only days after completing his first semester at Iowa, Briddle saw his doctor about lumps and pain he'd noticed in his groin. The former high school wrestler and football player underwent an ultrasound, several X-rays, and a biopsy in Iowa City. On Christmas Day, he was diagnosed with stage 3 testicular cancer, which had spread to his abdomen and lungs. Briddle underwent localized surgery a couple days later and began three rounds of chemotherapy in mid-January. "It was just shock," he says. "I didn't have time to process everything; it was more just 'I have to do this.'"

Briddle finished his chemotherapy in mid-March 2019 and completed tests in May that revealed his cancer was gone. That spring, he took two classes online and joined Delta Sigma Pi while living with his mother in North Liberty, Iowa. Briddle's improved health and promising periodic scans at UI Hospitals & Clinics allowed him to return to campus in fall 2019 as a sophomore and rejoin Dance Marathon as a dancer. "Hearing stories from the families at the dancer meetings would tug at my heart even more so than before," says Briddle. "That inspired me to keep pushing and do more to spread the Dance Marathon mission and message to as many as I could."

Briddle served on the finance committee as a junior and now leads it as finance director who handles money, tracks donations, oversees four subcommittees, and advises the executive director on financial matters. In February, UI Dance Marathon raised $ 1.36 million at its Big Event, which was held virtually.

Briddle, who is majoring in business analytics and finance, hopes to continue serving others beyond graduationŚwhether it's for a nonprofit or a business that aligns with his values. Says Briddle: "I just want to make a positive impact on the world, even if it's just one person."

Join our email list
Get the latest news and information for alumni, fans, and friends of the University of Iowa.
Sign up now
Related Articles
Army Turns to Iowa Experts as It Overhauls Fitness Standards
The UI's Virtual Soldier Research Program puts the Army Combat Fitness Test through its paces.
Terrapin Fan Funds New AEDs After Cardiac Emergency at Iowa Basketball Game
Stan Goldstein collapsed inside Carver-Hawkeye Arena while cheering for the Maryland men's basketball team. After receiving life-saving care at Iowa, he made a gift to say thank you and help others who may experience a similar crisis.
Family Keeps Cancer Patient's Memory Alive by Supporting Iowa Research
In the decade since Tad Agnewĺs death, an annual Davenport fundraiser has brought together his friendsŚand more than $350,000 to support the UI Holden Comprehensive Cancer Center.
Family Marks 10 Years of Fundraising for Iowa Vision Research
Samĺs Scramble for Sight, an annual golf tournament in Michigan, has raised $4.5 million to fight inherited eye diseases.