By IM Staff
The latest alumni and faculty achievements, including John Pappajohn’s $10 million gift and a milestone birthday for Hawkeye superfan Sam Christensen.

IfeOluwa Nihinlola (21MFA), a UI adjunct assistant professor of creative writing, was named to the longlist for the 2021 Granum Foundation Fellowship Prize, which helps writers complete and launch literary works.

Tom Clos (13BA) is a proposals manager for Flywire Corporation, a global financial technology company based in Boston.

Gerardo Guerrero- Segura (18BSN), a graduate student in the UI College of Nursing, recently received one of 30 student scholarships from the American Psychiatric Nurses Association.

Cindy Ann Kilgo (16PhD), an assistant professor of education at Indiana University, received the Early Career Award from the Association for the Study of Higher Education.

Elizabeth Schule (14MA, 15MFA), an artist and art instructor in Edgartown, Massachusetts, was featured in a statewide exhibition in Maine titled Freedom & Captivity: Art on Abolition.

Anureet Walia (17F), a UI clinical assistant professor of anesthesia, pediatrics, and psychiatry, received the Innovations in Clinical Care Award from the University of Iowa Physicians group in a ceremony in October.

Nicolette Ward (12BA) is a senior attorney at Romanucci & Blandin, a law firm in Chicago.

Benjamin Wills (16MA, 17MFA), an artist and art educator in Colorado, was featured in a statewide exhibition in Maine titled Freedom & Captivity: Art on Abolition.

Jacob Yeates (13BFA), a freelance illustrator and art educator in Minneapolis, was featured in a statewide exhibition in Maine titled Freedom & Captivity: Art on Abolition.

Daniel Alarcón (04MFA), a writer, radio producer, and assistant professor in the School of Journalism at Columbia University in New York, is the recipient of a 2021 MacArthur Fellowship, also known as the “genius grant.”

Drake Busch (04BBA) is owner, lead photographer, filmmaker, and editor at Drake and CO Photography and Films in Littleton, Colorado.

Dilek Ince (06R, 08F, 09F), a UI clinical professor of internal medicine, received the Best Consulting Provider Award from the University of Iowa Physicians group in a ceremony in October.

Krista Kohl (02BA), a UI clinical associate professor of pediatrics, received the Innovations in Clinical Care Award from the University of Iowa Physicians group in a ceremony in October.

Kenneth Nepple (04MD, 10R), a UI clinical associate professor of urology, received the Excellence in Quality Award from the University of Iowa Physicians group in a ceremony in October.

Maggie Shipstead (08MFA), a best-selling novelist in Los Angeles, was named to the shortlist for the Booker Prize for her third novel, Great Circle.

David Bissinger (90BA), a partner at the Houston law firm Bissinger, Oshman, Williams & Strasburger, was recognized as one of the top business litigators in Texas and the nation in the 2021 editions of Texas Super Lawyers and The Best Lawyers in America.

Kevin Doerschug (94MD, 97R, 98F, 02MS, 02F), a UI clinical professor of internal medicine, received the Excellence in Our Workplace Award from the University of Iowa Physicians group in a ceremony in October.

Brad Eldeen (99BA) is president of the Hawkeye Wrestling Club, which since 1973 has provided training, coaching, and resources to help athletes pursue world and Olympic championships.

Cristina Gapasin Tortal (94BA, 94BS) is assistant dean of admissions and student financial services at the University of California-Irvine School of Law.

Colin Garvey (99BA), of Chicago, is author of The Fallen Race Trilogy, a science fiction series.

Elizabeth McCracken (90MFA), the James Michener chair in creative writing at the University of Texas at Austin, was named to the National Book Award longlist for The Souvenir Museum, her latest story collection.

Angel West (94BA), a trial lawyer whose practice focuses on the defense of consumer class actions, ERISA litigation, product liability, and commercial litigation, is a shareholder for the Maynard Cooper & Gale law firm in Des Moines.

Daniel P. Bartlett (83BS, 86DDS) retired from his West Des Moines dental practice in August after a career that included earning the U.S.A.F. Tactical Air Command Real Professional Award in 1988 and the Air National Guard Dental Officer of the Year Award in 2001.

Sandra Daack-Hirsch (86BSN, 98MSN, 07PhD) is executive associate dean in the UI College of Nursing, where she has been a faculty member since 2007.

David Heiden (80BBA), who earned his officer commission from the UI Air Force Reserve Officer Training Corps in 1980 and flew as a pilot in the U.S. Air Force for 10 years, recently retired as a captain after 30 years of flying with Delta Air Lines.

Dean Kruckeberg (85PhD), a communication studies professor at the University of North Carolina at Charlotte, received the Gold Anvil lifetime achievement award, the highest individual honor from the Public Relations Society of America.

Joel Bolger (76BS, 78JD), the only justice in Alaska’s history to have been appointed to all four levels of the state court system, recently retired as chief justice of the Alaska Supreme Court after serving on the state’s top court since 2013.

Charles West (73MFA, 75DMA), professor emeritus at Virginia Commonwealth University in Richmond, Virginia, was one of two clarinetists recently inducted into Honorary Membership in the International Clarinet Association, where he served as president from 1988 to 1990.

Fred Luthans (61BA, 62MBA, 65PhD), professor emeritus at the University of Nebraska and former president of the Academy of Management, recently received the academy’s Distinguished Scholarly Contributions to Management Award, which is considered the top award in the management academic field.

John Tyrrell (47BA, 50MD), a longtime physician in Manchester, Iowa, retired from the board of Manchester Enterprises, a nonprofit community development organization he helped start in 1954.

Molly Hall-Martin, a doctoral student in the UI College of Education’s Higher Education and Student Affairs program, has been appointed to the National Advisory Committee on Institutional Quality and Integrity by the U.S. Secretary of Education.

Leonard MacGillivray, chair of the UI Department of Chemistry, received the 2021 American Chemical Society Midwest Award for his contributions to the development of chemical research and education.

Kristy Nabhan- Warren, the V.O. and Elizabeth Kahl Figge Chair in Catholic Studies at the UI Department of Religious Studies, is author of the book Meatpacking in America: How Migration, Work, and Faith Divide the Heartland, published by University of North Carolina Press.

Okwudili Nebeolisa, a UI provost fellow and graduate student in the Iowa Writers’ Workshop, was named to the longlist for the 2021 Granum Foundation Fellowship Prize, which helps writers complete and launch literary works.

Hao Zhou, a UI graduate student in cinematic arts, received a Student Academy Award in the alternative/experimental category from the Academy of Motion Picture Arts and Sciences for his short film titled Frozen Out. 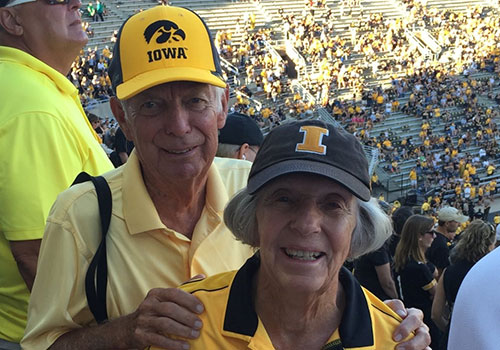 Hawkeye football is known for its loyal fan base, but few go as far back as Sam Christensen (55DDS, 58PedoS), who celebrated his 90th birthday this past fall. A native of Ringsted, Iowa, Christensen grew up listening to Iowa football on the radio, sparking a lifelong love affair with the Hawkeyes and the university. When Christensen was 8, his father took him to Iowa Stadium to watch Nile Kinnick (40BA) and the fabled 1939 Ironmen beat Notre Dame in a game for the ages.

Christensen went on to study dentistry at Iowa, where he helped put himself through college by working as a houseboy at the Delta Gamma sorority house. There he met his future wife, Jane Walker Christensen (55BSC). After graduation, Christensen became a pediatric dentist in Waterloo and was fondly known to his patients as Dr. Sam.

Christensen was a Hawkeye football season ticket holder for more than 50 years, a longtime men’s basketball season ticket holder, and a member of UI Athletics’ Scholarship Committee. All four of the Christensens’ children attended the UI, as did 10 of 12 grandchildren. In 1994, the UI presented Christensen with a Distinguished Alumni Award for service in recognition of his community volunteerism and support for the College of Dentistry, Hawkeye athletics, and the greater university. 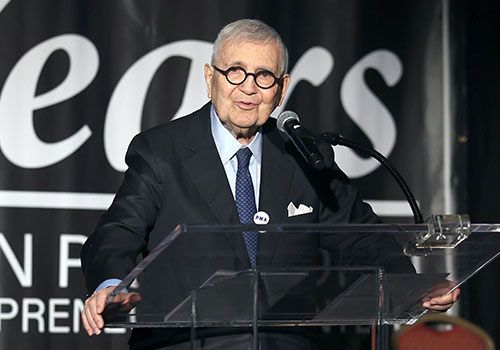 In 1996, John Pappajohn founded and financed centers at the UI, University of Northern Iowa, Iowa State University, Drake University, and North Iowa Area Community College. He announced his latest donation to those programs in September in Des Moines at the 25th anniversary celebration for JPEC.

John Pappajohn is the president of Equity Dynamics and Pappajohn Capital Resources in Des Moines. After graduating from Iowa, he led several entrepreneurial projects before becoming a full-time venture capitalist in 1969. He has been involved in more than 100 startups and 50 initial public offerings and has served as a director of more than 40 public companies.