Rachel Groves (20JD) is an associate focusing on business litigation at the law firm Shook, Hardy & Bacon in Kansas City.

Guowei Qi (21BS), a recent graduate in biochemistry, computer science, and mathematics, was named one of the nation's 17 Churchill scholars and will continue his research at the University of Cambridge in England.

Carol Ayangbile (13MHA) is senior director of patient experience at Agilon Health and serves as vice president for diversity, equity, and inclusion on the UI Department of Health Management and Policy's alumni board.

Jonique R. Childs (18PhD), an assistant professor in the College of Education Department of Student Development at the University of Massachusetts Amherst, earned a 2020-2021 Global Career Development Facilitator scholarship from the National Board for Certified Counselors Foundation.

Anthony Clemmons (16BS), a former Hawkeye basketball player, was a member of Igokea, a club team in Serbia that competed in Europe's Basketball Champions League this past season.

Mike Goff (12BLS), a former Hawkeye football player who retired in 2009 after 12 years in the NFL, is an offensive line coach at San Diego State University.

Zachary J. Hermsen (12BA, 15JD) is a member attorney at Whitfield & Eddy Law in Des Moines, where he's a member of the litigation and ALFA International Transportation practice groups.

Adrian Holm (10F), a clinical associate professor in gastroenterology and hepatology at UI Health Care and section chief for gastroenterology at the Iowa City VA, received the Mark Wolcott Award for Excellence in Clinical Care Delivery, presented by the U.S. Department of Veterans Affairs.

Alex Lodge (13PhD, 16JD) is an intellectual property lawyer for Cargill and co-founder of Justice 101, a nonprofit organization that teaches students and young persons of color their constitutional rights under the Fourth Amendment.

Rebecca Morin (16BA) is a reporter for USA Today covering the White House and immigration.

Lisa Neher (16DMA), a musician in Portland, Oregon, recently composed, produced, and performed in the One Voice Project Micro Opera Festival, a weeklong virtual festival of miniature operas performed by acclaimed singers from across the U.S. (youtube.com/LisaNeher).

Crystal Pound (16JD) is an attorney at Simmons Perrine Moyer Bergman law firm in Cedar Rapids and co-founder of Justice 101, a nonprofit organization that teaches students and young persons of color their constitutional rights under the Fourth Amendment.

Kaye Williams Cole (06PhD) is a mental health therapist and consultant for the UI Athletics Department and is an adjunct lecturer in the UI Department of Rehabilitation and Counselor Education.

Adam David Roth (02MA, 08PhD) was appointed dean of the College of Arts and Sciences and professor of rhetoric and philosophy at Quinnipiac University in Hamden, Connecticut.

Karen Reed Troy (03PhD) is a professor in the Department of Biomedical Engineering at Worcester Polytechnic Institute in Worcester, Massachusetts, where her research focuses on the interactions between physical activity and musculoskeletal health, disease, and injury.

Audra Kerr Brown (97BA), associate fiction editor at New Flash Fiction Review, is featured in The Best Small Fictions 2021 anthology for her winning story "When the Pregnant Girls First Arrive at St. Eulalia's Home for the Lost and Wayward."

Erin Eiselein (97BA) is co-chair of the health care group for the Brownstein Hyatt Farber Schreck law firm in Denver.

Valerie Keffala (96PhD), clinical assistant professor of orthopedics and rehabilitation at the UI Roy J. and Lucille A. Carver College of Medicine, is president of the Iowa Psychological Association.

Amanda Ennis Mikhail (99BSE), administrative lead for research for the Mayo Clinic Department of Medicine in Rochester, Minnesota, and co-chair of the Mayo's COVID-19 research task force, has been inducted into the College of Engineering's Distinguished Engineering Alumni Academy.

David Stark (96MHA), president and CEO of UnityPoint Health-Des Moines, was named the 2021 Forty Under 40 Alumnus of the Year by the Business Record for his contributions to the community since he was first named to the list in 2001.

Jim Heffernan (87BGS), a former Hawkeye wrestler, retired after 29 years with the University of Illinois wrestling program, including the last 12 years as head coach.

Daniel T. Meyer (85MA), president of Aurora BayCare Medical Center in Green Bay, Wisconsin, has been elected as chair of the board of directors for the Wisconsin Hospital Association for 2020-21.

Peggy Carlson Nopoulos (85BS, 89MD 93R, 94F), UI professor of psychiatry, pediatrics, and neurology and chair and departmental executive officer of psychiatry, received the May Brodbeck Distinguished Achievement Award for Faculty at the UI's annual Celebration of Excellence and Achievement Among Women.

Brian Pinkerton (85BA) is author of the novel The Nirvana Effect, a dystopian thriller published by Flame Tree Press/Simon & Schuster.

Monique Vescia (85MA), a freelance writer with 25 nonfiction books to her credit, published her first novel, a political satire titled Hole in the Sky.

Jeff Weld (83BS, 94MS, 98PhD) is author of Charting a Course for American Education, a memoir about his time with the Executive Office of the President as senior policy advisor for STEM education in the White House Office of Science and Technology Policy.

Lilia A. Abron (72PhD), founder and CEO of PEER Consultants, an environmental consulting firm headquartered in Washington, D.C., was the distinguished speaker during a recent UI College of Engineering seminar in which she discussed the role of environmental engineering in solving global challenges.

V. Roy Cacciatore (70BA) was re-elected village justice in his hometown of Freeport, New York, for an unprecedented seventh time.

James Carney (70BA), who qualified for the 1970 NCAA golf championship for the Hawkeyes and placed second in that year's NCAA long drive contest, is a member of the Iowa Golf Hall of Fame's class of 2021.

Jeff Chapman (79BBA), a partner with Gibson Dunn & Crutcher law firm in Dallas, was featured by The Texas Lawbook as one of the state's top mergers and acquisitions dealmakers in 2020.

Jeffrey Dorf (77BS), a pulmonary and critical care physician with the New Mexico Cancer Center in Albuquerque, was named "Top Doc in Pulmonary Medicine" for the second year in a row by Albuquerque Magazine.

Francis Hamit (72BGS, 76MFA), an author, playwright, and screenwriter based in Sherman Oaks, California, published a book review in the summer 2021 edition of the International Journal of Intelligence and CounterIntelligence.

James Alan McPherson (71MFA), the longtime Iowa Writers' Workshop professor and the first African American writer to win the Pulitzer Prize for Fiction, was honored by the City of Iowa City, which has renamed the former Creekside Park after the late writer.

Fred Zirm (77MFA) is a retired English and drama teacher in Rockville, Maryland, and recently published a book of poetry titled Object Lessons.

George E. Matsoukas (66MA) is author of Under One Roof: Uniting the Orthodox Church of America, his second collection of essays from his time as executive director of Orthodox Christian Laity.

Jane Weaver-Sobel (69BA), president of Weaver & Weaver consulting firm in Charlotte, North Carolina, and president of the Charlotte Iowa Club, was presented with a Distinguished Service Award by SCORE Charlotte for her mentoring and volunteerism on behalf of the city's small business community.

Wallace Alward, UI professor emeritus of ophthalmology and visual sciences, received the Heroes of Orbis Award from Orbis International for his volunteer work training doctors around the world, including this past year when he hosted online training programs for physicians from Zambia and Mongolia.

Mary Sue Coleman (19LHD), former president of the UI and the University of Michigan, was honored by UM with the naming of Mary Sue Coleman Hall, which houses its Life Sciences Institute and is the first academic building on the Ann Arbor campus to be named for a woman.

Larry Lockwood, assistant provost and registrar, has retired after 19 years serving the UI, including his work supporting the university's veteran services.

Kären Mason, who recently retired after serving as founding curator of the Iowa Women's Archives in the UI Libraries for 28 years, received the Jean Y. Jew Women's Rights Award at the university's annual Celebration of Excellence and Achievement Among Women. 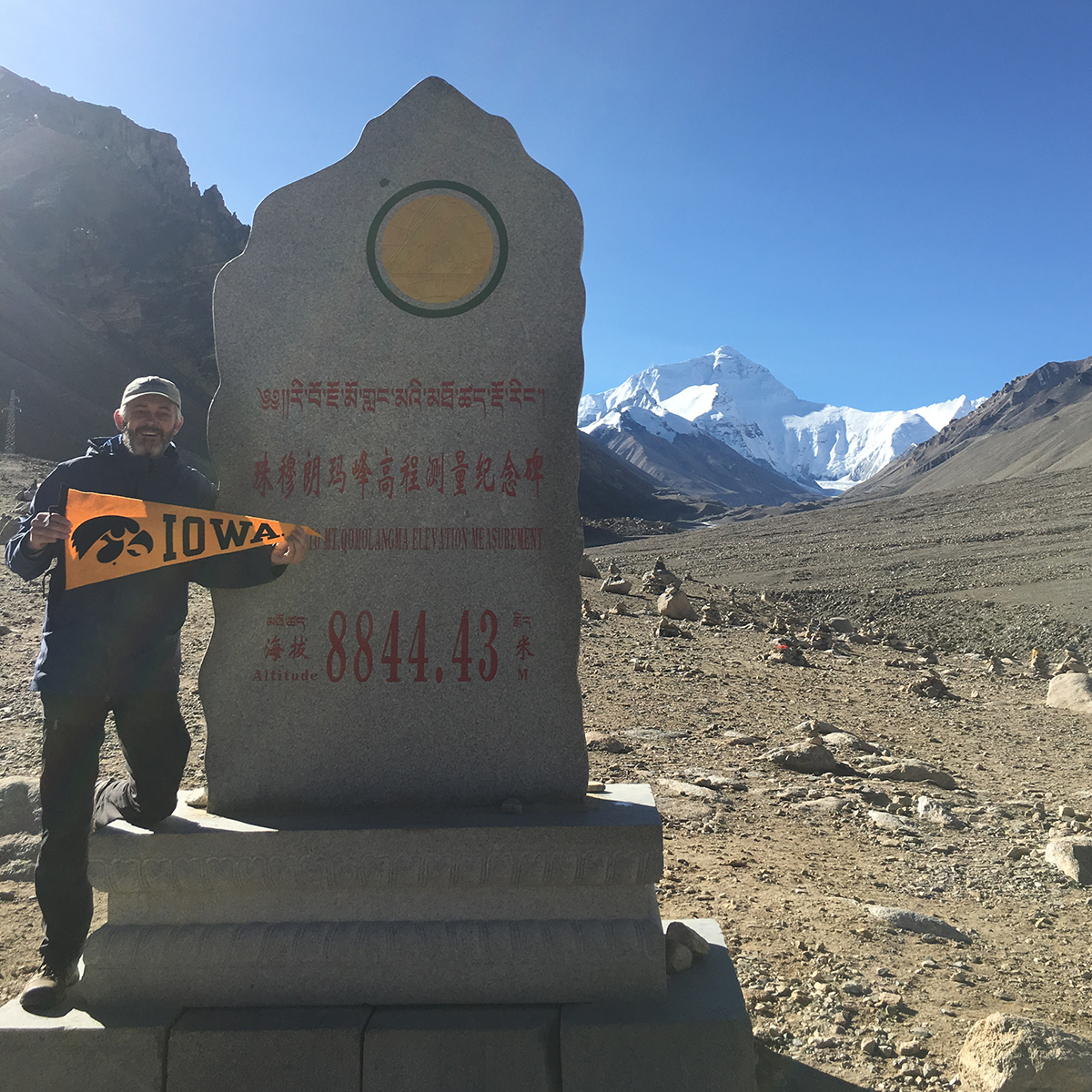 Research That Resonates From Iowa to Everest

The impact of University of Iowa research extends far beyond the Hawkeye State. While the pandemic has limited travel since March 2020, UI's international scholarship could begin to ramp up again this coming academic year. Pictured here, David Peate, professor of geochemistry and chair of the Department of Earth and Environmental Sciences, holds a Tigerhawk pennant in 2019 near the base camp for Mount Everest and Rongbuk Monastery in Tibet. In recent years, Peate has participated in a field workshop in Tibet to study the region's geology, as well as an international expedition to drill into the seafloor of the South China Sea to learn how Earth's continents evolved and how new oceans are created.

Research That Resonates From Iowa to Everest

The impact of University of Iowa research extends far beyond the Hawkeye State. While the pandemic has limited travel since March 2020, UI's international scholarship could begin to ramp up again this coming academic year. Pictured here, David Peate, professor of geochemistry and chair of the Department of Earth and Environmental Sciences, holds a Tigerhawk pennant in 2019 near the base camp for Mount Everest and Rongbuk Monastery in Tibet. In recent years, Peate has participated in a field workshop in Tibet to study the region's geology, as well as an international expedition to drill into the seafloor of the South China Sea to learn how Earth's continents evolved and how new oceans are created.