The Story of a Papermaker: Inside the University of Iowa Center for the Book

By John Riehl
Master craftsman Tim Barrett reflects on more than three decades at the Center for the Book and helps prepare the distinctive program for its next chapter. 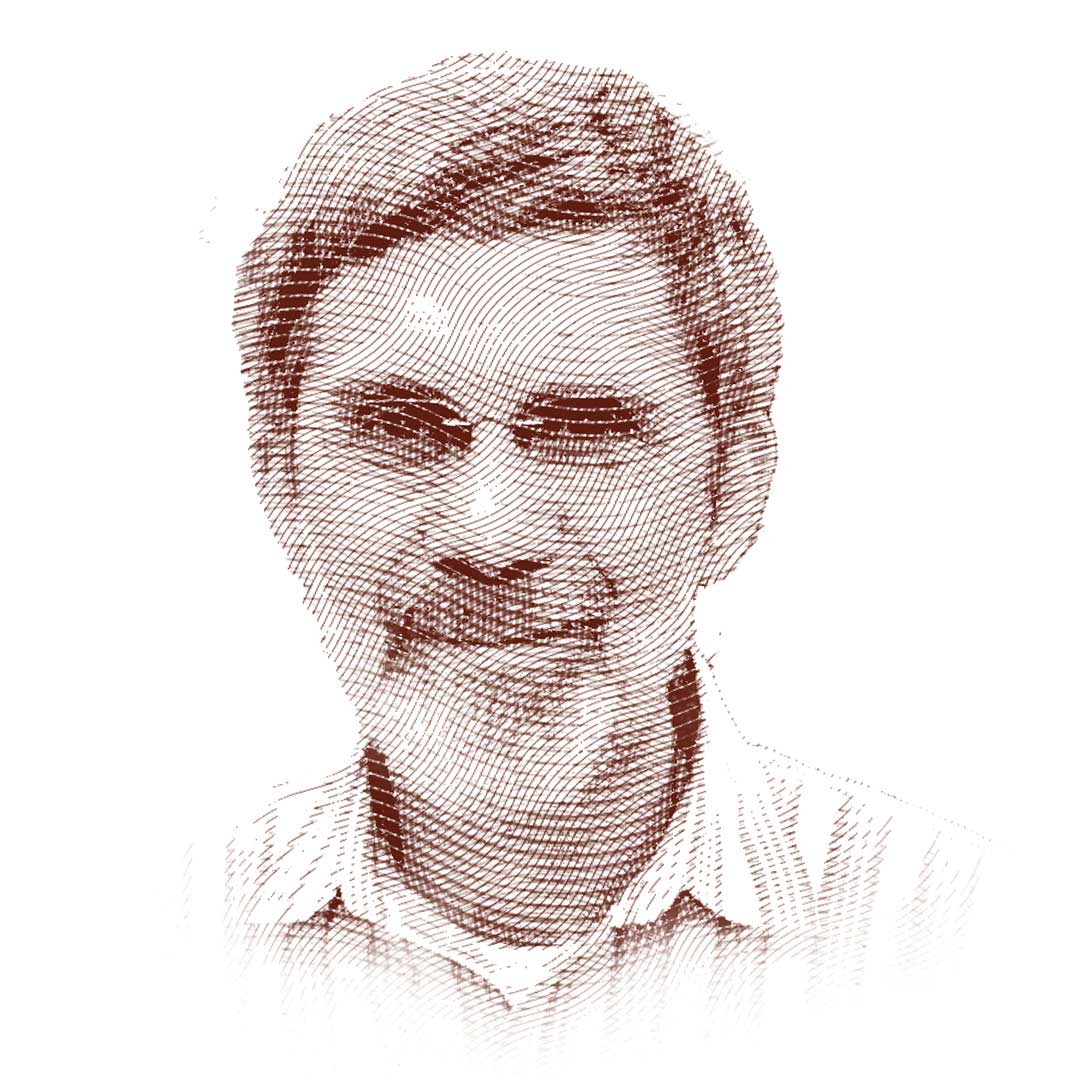 As an MFA student at the University of Iowa Center for the Book, Katharine DeLamater loved Fridays. Her busy weeks always concluded with a trip to the Oakdale Research and Production Paper Facility to create hand-crafted paper alongside renowned papermaker Tim Barrett, who was the main reason why she chose to attend graduate school at Iowa.

Two of DeLamater's mentors at Mount Holyoke College in Massachusetts studied under Barrett at Iowa, so she already knew quite a bit about this "genius" papermaker. "His reputation precedes him, and I was so excited to meet him," DeLamater recalls. "I couldn't believe I was going to have that opportunity when I was looking at the Center for the Book.

This past spring, DeLamater was in the final cohort of papermakers who earned MFA degrees under Barrett during his illustrious 34-year career at the Center for the Book.

The recently retired Barrett joined the Center for the Book on the ground floor as a paper specialist in 1986 and served as its director on two separate occasions. The professor in the School of Library and Information Science taught courses that addressed the history, technique, science, and aesthetics of hand papermaking, and oversaw the Oakdale Research and Production Paper Facility. Now in his retirement, Barrett is working to set the distinguished center up for continued success by helping secure a $2.5 million challenge grant from the Windgate Charitable Foundation.

The Center for the Book began as a place for printing and publishing literature. Around the same time as conservator Bill Anthony founded the Book Conservation Lab at the UI Libraries, Barrett introduced papermaking to Iowa. "Tim turned this into an amazing experience for young papermakers and expanded the range of what the UICB was doing, including helping to realize its first educational credential that ultimately led to our offering an MFA in the book arts," says Julie Leonard, associate professor and director of graduate studies at the Center for the Book.

The Road to Iowa

Barrett earned a bachelor's degree in art communications from Antioch College in 1973 and later spent two years working with Kathryn and Howard Clark at Twinrocker Handmade Paper, and two years under a Fulbright Fellowship studying papermaking in Japan.

Upon returning from Japan in 1977, Barrett had no idea how he would make a living at papermaking. He didn't see a path forward for traditional handmade papermakers. Barrett decided to set up a workshop in his parents' barn and do his best to become engaged in the craft of papermaking.

"You could see from [my archives] that I was really having a hard time making paper and selling it," Barrett says. "I was writing books about Japanese papermaking, hosting conferences, and taking classes at Western Michigan University."

Kim Merker took notice of Barrett and his talents. When creating the Center for the Book in 1986, Merker managed to convince university administrators of the importance of hiring specialists in bookbinding and papermaking.

Barrett accepted Merker's offer to join the UI and quickly began honing his papermaking skills in this unique program that integrates training in book arts practice and technique with research into the history and culture of books.

The Art of Papermaking

At Iowa, Barrett followed a different path than many of his peers in papermaking who either made paper for other artists or made art in paper. He was more interested in the aesthetics of traditionally made sheets, while also making paper for conservators who needed old books and documents repaired and preserved.

"What's driven me has been paper aesthetics. Japanese papers were lustrous and shiny and had a wonderful soft, crisp feel," Barrett says. "When I came back from Japan, I got interested in 15th century European papers. They are very light in color, supple, and strong, and they have a lot of integrity and authenticity about them."

From early in his career, Barrett wasn't trying to make substrate materials for his own drawings or prints. People were left wondering why he didn't do anything with the paper he created by hand. Barrett simply always has been happy to see other people use his work.

In 1999, the National Archives in Washington, D.C., commissioned Barrett, along with his staff and graduate students, to fabricate soft, unbleached, acid-free paper to rehouse the Declaration of Independence, the Bill of Rights, and the Constitution as part of the Charters of Freedom Re-encasement Project.

The paper, crafted from textile quality American-grown cotton, helps enhance the light appearance of the translucent parchment; provides a soft, stable cushion between the document and the perforated metal plate below; and stabilizes the humidity within each encasement.

"That's a good story for people in the state of Iowa who don't understand why universities exist," Barrett says. "What are you really doing that matters to me? This is definitely something to be proud of."

Barrett's national notoriety continued to grow a decade later. In 2009, he was a recipient of a fellowship from the John D. and Catherine T. MacArthur Foundation. The $500,000 MacArthur Fellowships, popularly known as "genius grants," are awarded to 24 individuals per year in a variety of fields who have shown exceptional originality and dedication to their creative pursuits. "He's won a MacArthur Award, and that signals him as a 'genius.' What did he do with that award? He immediately kept learning and kept teaching. He worked on global ways of understanding papermaking," says Matthew Brown, associate professor of English and current director of the Center for the Book. 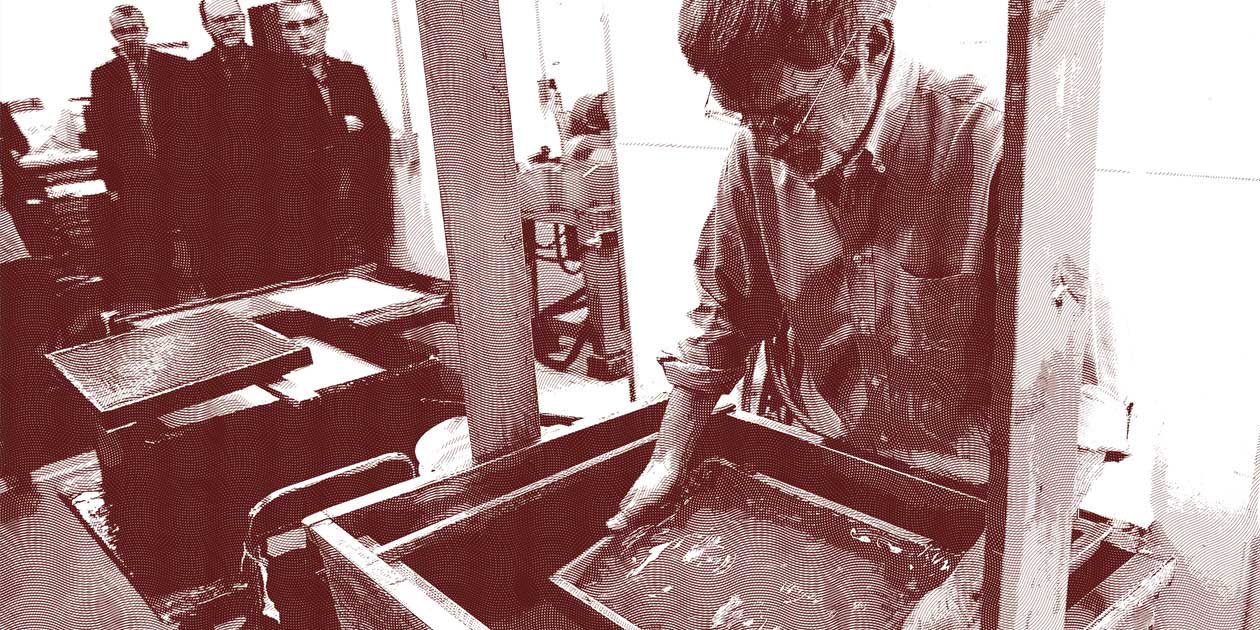 Brown describes his colleague as a storyteller on one hand and a walking archive on the other.

"As a walking archive, he knows about things that aren't written down in books," Brown says. "He's been able to share that knowledge with students and transmit for the future a set of skills and craft-based knowledge that otherwise wouldn't exist. In terms of storytelling, he transmits it through stories, so it's a sign of what a great teacher he is."

Even with her mentor's many accolades, DeLamater always felt like she was treated as an equal by Barrett.

"He'll present to you what his suggestion might be for the type of paper you're trying to make. But he'll let you have free rein over how you want the project to end up," says DeLamater, who is currently in Brooklyn, New York, on a West Bayview Foundation Fellowship from the Dieu Donné Papermaking Studio. "Meaning if I had a different approach I wanted to take, that was a welcome way for me to proceed."

In retirement, Barrett plans to set up a small workshop in his basement, where he will make small sheets of paper, which is how he got his start in papermaking many years ago. He also would like to volunteer at the UI Libraries' Special Collections and help the Center for the Book with its fundraising efforts.

Ready to Meet the Challenge

During his 34 years at the center, Barrett grew to believe deeply in its mission to train young book artists and book scholars. To support these efforts, the Center for the Book has been awarded a $2.5 million grant from the Windgate Charitable Foundation. There's one catch: the $2.5 million grant is dependent on the center raising $2.5 million by Dec. 31, 2021.

"That would be the icing on the cake if we could make that happen," says Barrett, as he looks back on his distinguished career. "We're going to make it happen, one way or another."

Barrett believes the Center for the Book differentiates itself from peer programs around the world. "We have facilities for teaching not only fine press printing, book binding, and papermaking, but also calligraphy," he says. "I would add that in training book artists we emphasize sensitivity to materials and workmanship; the history and technique of the various book crafts; what one might call artisanal practice. That traditional background we feel is essential to making book art with integrity and substance."

The funds will address three crucial Center for the Book needs: student fellowships and assistantships, endowed faculty support, and professional travel funding for students and faculty to present their research at conferences and conduct research around the nation.

"The Center for the Book is singular. There's no place like this," Leonard says. "Part of it is the dedication of the faculty to their own research and the students and the building of a community.

Join our email list
Get the latest news and information for alumni, fans, and friends of the University of Iowa.
Sign up now
Papermaker Tim Barrett looks back at his career at the UI Center for the Book.

For questions and more information on how you can support the Center for the Book, please contact Jeff Liebermann (02MA) from the UI Center for Advancement at jeff.liebermann@foriowa.org. 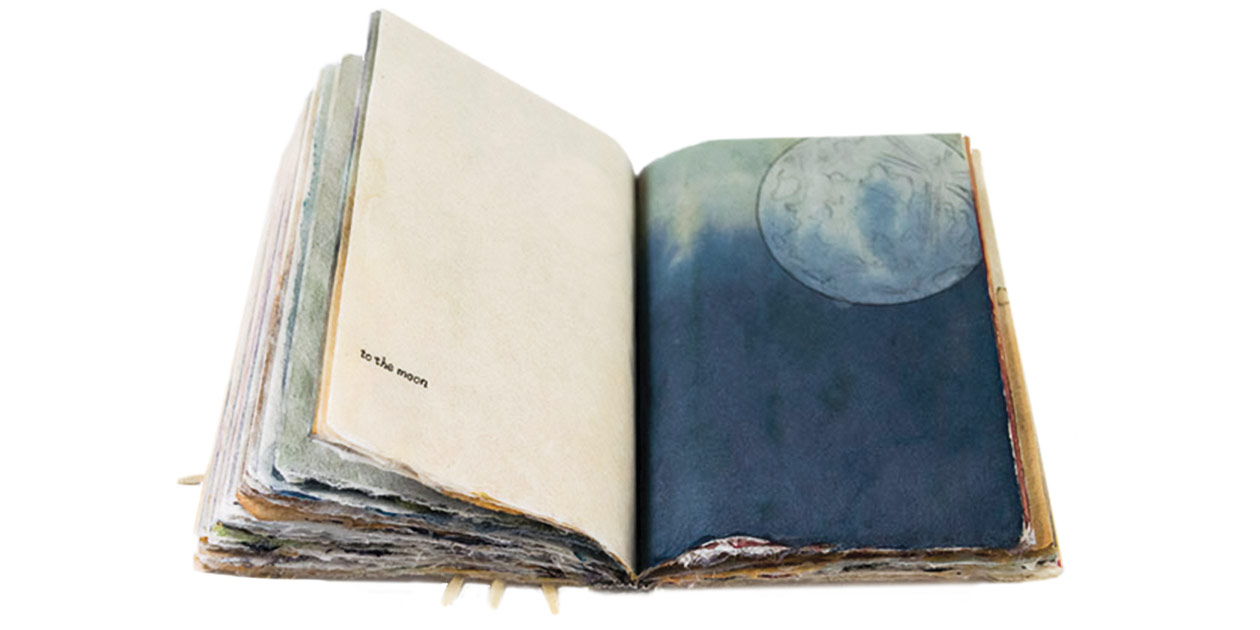 IMAGE COURTESY UI CENTER FOR THE BOOK Natasha Brandel (20MFA) crafted Offerings, a book chronicling what she's thankful for, to present this past spring as her MFA thesis through the Center for the Book. The Windgate Challenge grant could help fund the materials needed for these student learning opportunities.

What: The University of Iowa Center for the Book has been awarded a $2.5 million grant from the Windgate Charitable Foundation, dependent on raising $2.5 million on its own.

When: The Center for the Book has been given 20 months to raise the $2.5 million, targeting a completion date of December 31, 2021, thanks to the Windgate Foundation extending their deadline by a year due to the COVID-19 crisis.

Who: The grant will benefit the students and faculty of the Center for the Book, the UI arts and humanities communities, and the field of the book arts and book history at large. The grant also pays tribute to the leadership of Tim Barrett, at the heart of the program since its inception in 1986 and who retired in 2020.

Why: The Center for the Book is known as one of the most innovative combined book arts and book studies programs in higher education. Students go on to careers as book artists, printers, conservators, book designers, librarians, publishers, and scholars. Many of the graduates teach in prestigious workshop and academic programs or schools. The challenge grant money will seed private funding for the short and long term. Together, the funds will address three crucial Center for the Book needs:

Make a gift to help the Center for the Book realize its challenge grant award.

UI Center for the Book graduate students hosted a virtual MFA thesis exhibition this past spring to highlight their intricate work. Click on each image to learn more about the artists and their creations. "Hammer is the Prayer" - India Johnson Join our email list
Get the latest news and information for alumni, fans, and friends of the University of Iowa.
Sign up now
Related Articles
Iowa Artist Honors Her Hometown, Grant Wood in Public Mural
An Iowa art alumna creates a mural for Eldon that spotlights the town’s unique connection to the famous painting American Gothic.
Iowa Graduate Unearths New Details in John Wayne Gacy Case
Tracy Ullman uses her communications studies degree in her career as a documentarian, including as executive producer of the NBC docuseries John Wayne Gacy: Devil in Disguise.
Through the Lens of LIFE Photographer Ted Polumbaum
Retired UI journalism professor Judy Polumbaum pays homage to her father's work on the frontlines of history
T.C. Boyle's Latest Book Explores Interspecies Communication
The Iowa Writers' Workshop graduate examines what it means to be human in Talk to Me.
Advertisement