View All From You
Share
IOWA Alumni Magazine | October 2015
NEWSMAKER: Hashtag for History
By Nora Heaton 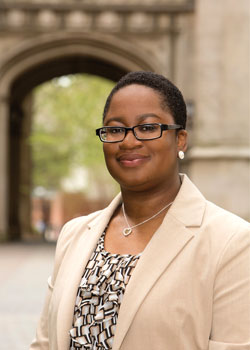 University of Iowa history professor Keisha Blain is one of the co-developers of #Charlestonsyllabus, created as a response to June's horrific and racially-motivated shooting at the African Methodist Episcopal Church in Charleston, South Carolina. Feeling frustrated by the lack of historical context in mainstream media coverage, Blain scrolled through her Twitter feed days after the tragedy and came across a tweet from a colleague, Brandeis University Professor Chad Williams: "Lots of ignorance running rampant. Folks need a #CharlestonSyllabus."

Blain responded immediately, and within minutes, she and Williams began corresponding to create a public reading list of key historical texts on racial violence and related issues—with Blain as curator. They began soliciting suggestions from other educators, historians, and scholars, using the Twitter hashtag #Charlestonsyllabus. Soon, the hashtag was trending. Within 24 hours, it had accumulated more than 10,000 tweets of suggestions or support.

The list has drawn international attention from news outlets like PBS, BBC, the LA Times, and the New York Times. Additionally, more than 115,000 people have accessed the #Charlestonsyllabus on the African American Intellectual History Society's website (AAIHS.org).

What's the mission of the #Charlestonsyllabus?

The project provides educators and the general public with resources that provide historical awareness—ultimately allowing for more informed conversations about race, Blain says.

The list is organized in sections—"Readings on Race and Religion," "Readings on the Civil War and Reconstruction," and "Readings on Post-Reconstruction and Jim Crow"—which include titles linked to WorldCat, a global library catalog. The syllabus includes a section of literature and poetry, and a multimedia section featuring music and films. A section, "For Young Readers," offers a list of resources accessible to children of varying ages.

Why is #Charlestonsyllabus so important?

Professors like Blain know that historical knowledge is critical when discussing current events and working toward change, and Twitter is an effective way for educators to engage with the public. "When we attempt to have conversations about race without an understanding of this history, they are often relegated to feelings and emotions—rather than facts," she says.

The crowdsourced reading list is among similar Twitter campaigns—with the #Charlestonsyllabus itself inspired by #FergusonSyllabus. Adds Blain: "It's not about another hashtag. It's about a recognition that we have the ability—and certainly the platform—to initiate meaningful change in this crucial moment."

Continuing her work with the syllabus, Blain and her collaborators are building a new website, TheCharlestonSyllabus.com. She is also co-editing a book, Charleston Syllabus: A Reader, which will be a multidisciplinary collection of key texts from the list.

Blain also plans to continue using the list resources to enhance her own work as an educator at the UI, already using many of its resources in her fall course, "Race and Politics in the 20th Century."

Says Blain: "While it's still difficult for me to think about the Charleston shooting and the nine innocent lives lost as a result of racial hatred, I see my involvement with the #Charlestonsyllabus as a small way of ensuring that their deaths [would not] be in vain."