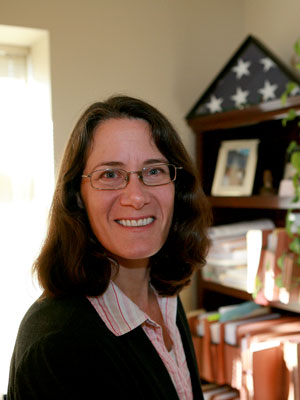 During a clerkship on the U.S. Court of Appeals for Veterans Claims, Amy Kretkowski could hardly believe the enormous amount of time it took for cases to work their way through the VA system. She routinely saw cases where a veteran had been trying to obtain VA benefits for decades.

Considering the sacrifice military veterans make for their country, Kretkowski, 08JD, found this legal climate unacceptable. To help veterans receive the honor and benefits they're due, she decided to return to Iowa City and specialize in veterans law.

"The system is supposed to be 'non-adversarial and claimant friendly,' but, in reality, it's not," says Kretkowski, adding that her clients often don't understand the benefits available to them. "It's important for veterans to have an advocate on their side."

Kretkowski, an attorney with the Hoefer Law Firm since 2011, is one of only a handful of lawyers in the region whose practice focuses exclusively on the legal issues vets face with the VA. For the past year, UI law student and Army veteran Jake Halverson has assisted her, helping with cases to upgrade military discharges, request VA debt waivers for indigent veterans, obtain official military service records, determine eligibility for different types of benefits, and review VA law to check the evidence needed to win claims for VA disability benefits.

"More often than not, when the VA awards a claim, it will assign a rate that is lower than what the veteran was expecting," Kretkowski says. "[We] help veterans appeal those decisions, and get them the highest rate they're entitled to at the earliest possible effective date."

Before the U.S. Court of Appeals for Veterans Claims was created in 1988, veterans whose cases were rejected by the VA had nowhere to go for legal recourse. When that court opened, it paved the way for the development of this whole new body of law.

Kretkowski's practice has about 90 clients, mostly from the Vietnam era but with several from the Korean War and a couple from World War II. Increasingly, clients come from the wars of the past decade—like Army Staff Sgt. Doug Snodgrass, whose injuries from roadside bombs and IEDs from service in Iraq and Afghanistan have left him on permanent disability. He believes he's eligible for a Purple Heart, but so far that medal hasn't been forthcoming.

The need for veterans lawyers will likely grow, due to the huge number of servicemen and women returning from the Middle East and their growing awareness of their entitlement to judicial review. For Kretkowski, it's rewarding to help these heroes move their cases through the system more efficiently.

"Unfortunately, the VA is the antithesis of efficient," she says. "But that hasn't stopped me from fighting the good fight."