By Katie Linder
2 minute read
An Iowa art graduate creates a mural for Eldon that spotlights the town's unique connection to the famous painting American Gothic. 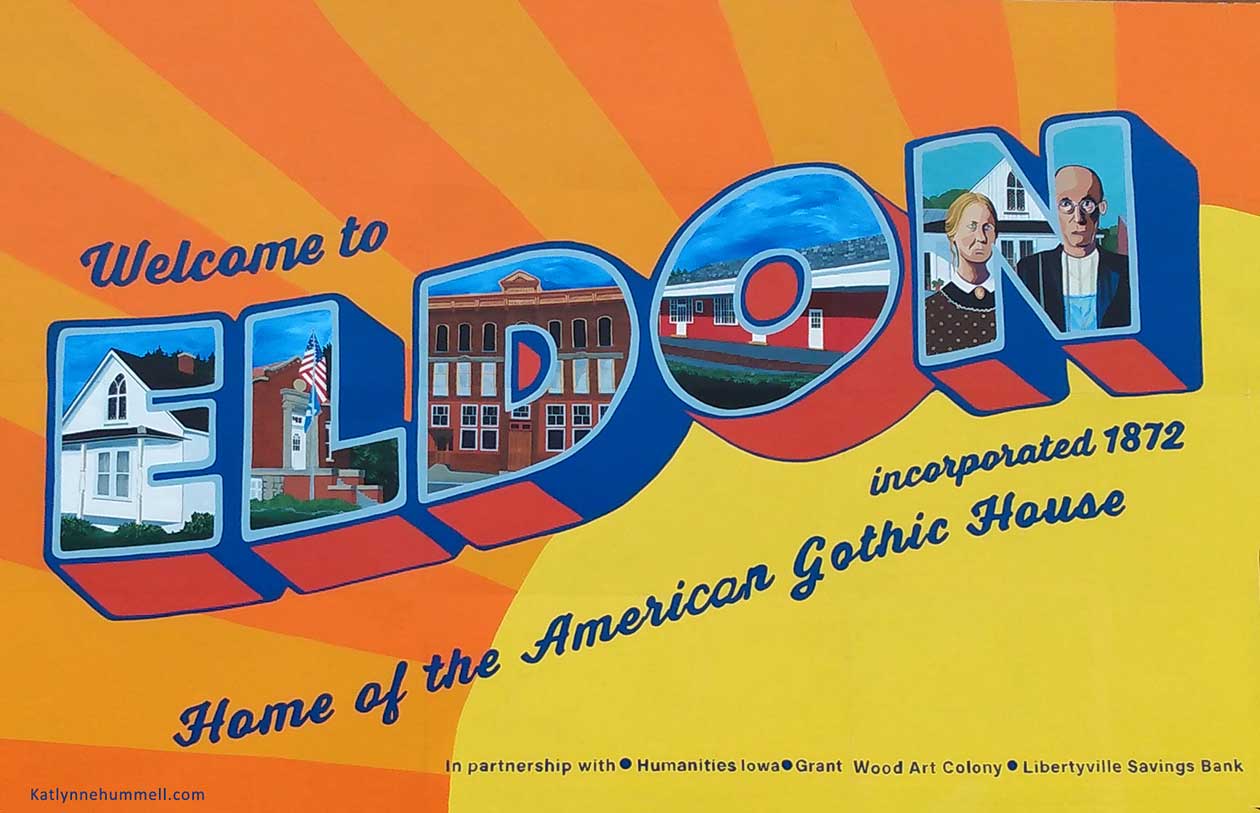 PHOTO COURTESY Katlynne Hummell Underhill Underhill created a mural for her hometown of Eldon that showcases its connection to Grant Wood's American Gothic.

As the saying goes—go big or go home. Artist Katlynne Hummell Underhill did both.

Underhill (19BFA) took on an ambitious project in early 2021. She painted a large public mural for her hometown of Eldon, which also happens to be home to the famous farmhouse featured in Grant Wood's iconic painting American Gothic.

The mural is a 20-by-30-feet vintage postcard that displays the words, "Welcome to Eldon, Home of the American Gothic House." Each letter of the town's name features something painted inside that's unique to Eldon, from the house to a depiction of the farmer and his daughter.

Underhill's connection to the town helped her book the gig. She was featured in an article where she mentioned Eldon being her hometown—that's how project leaders discovered her and then reached out to her. 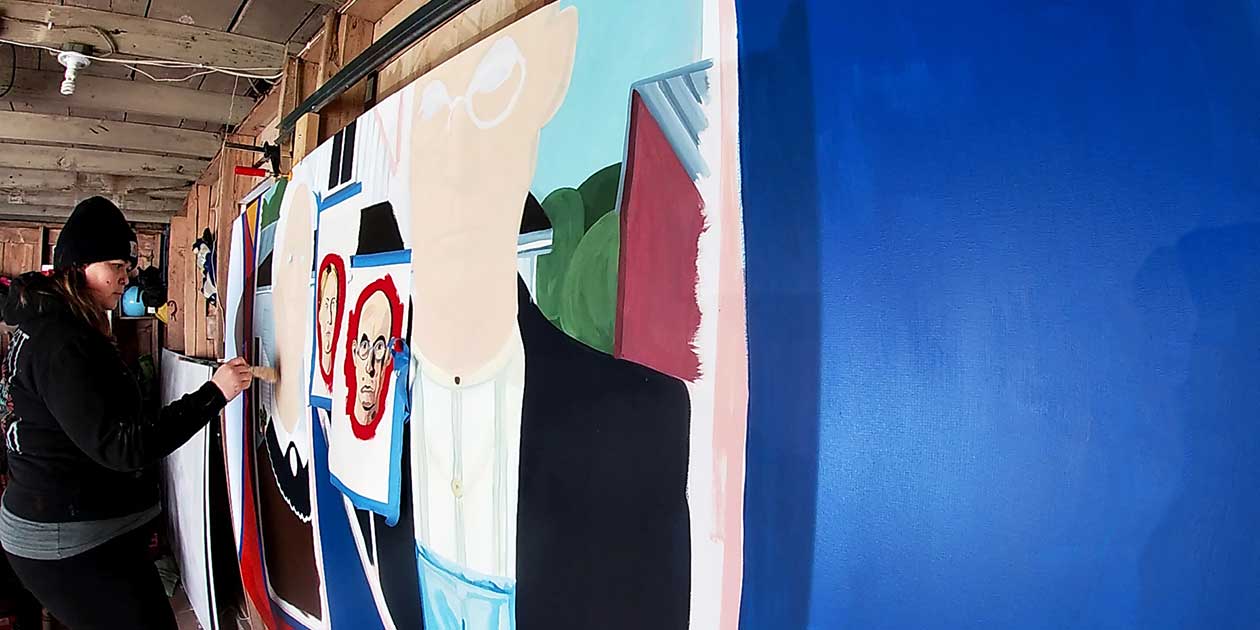 PHOTO COURTESY Katlynne Hummell Underhill Underhill paints a panels that was later installed as part of her mural in Eldon.

"It was important to the town that they chose someone from the area," Underhill says.

Underhill, who now lives in Coralville, Iowa, was featured in an University of Iowa published article because of her participation in the UI's inaugural Grant Wood Public Art Residency program in 2019. The program, part of the UI's Office of Outreach and Engagement was launched because of a surge in demand for public murals across the state, including in downtown Iowa City. Underhill says her experience with the residency taught her many of the logistical skills needed to produce large-scale, public murals—such as what materials to use and how to conduct contract negotiations.

"Residency really shaped my career and what I decided to do after leaving the university," she says. 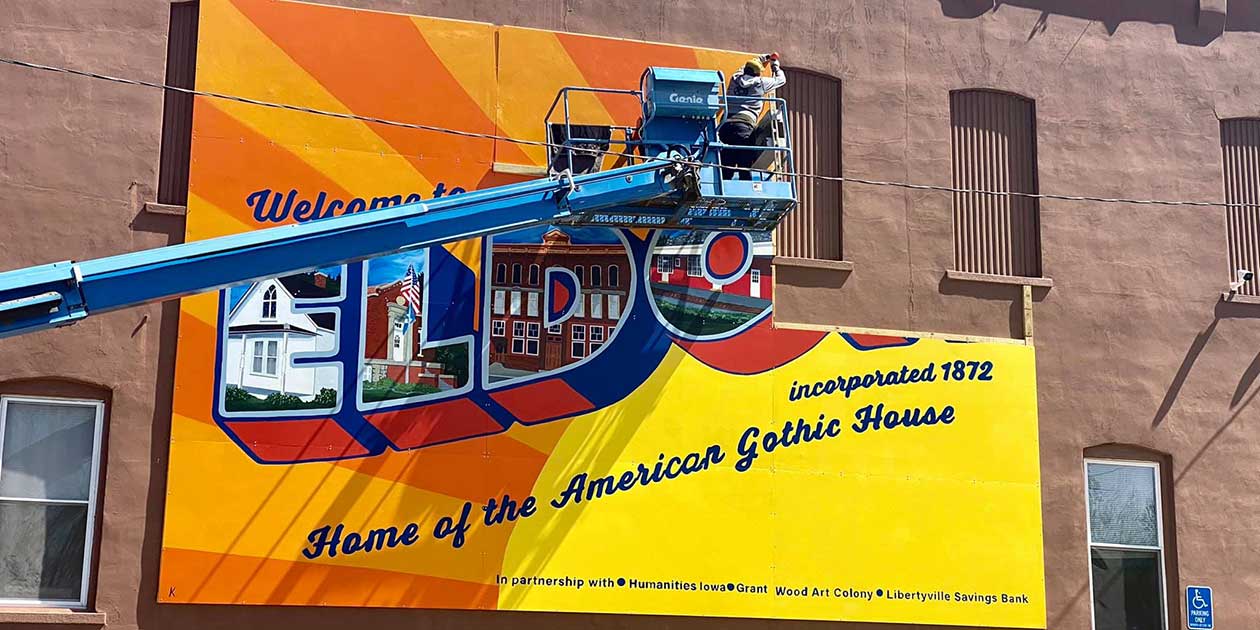 Underhill worked from five to 10 hours every day from the end of March through April to make her design for Eldon come to life. She used 12 aluminum panels and, in her garage, projected part of the design onto each panel, sketched it, and then painted it. At the end of April, she used a boom truck and power tools to install her artwork on the exterior of Eldon's city hall.

Underhill says, as an artist, it is important to her that artwork is accessible to everyone.

"A lot of communities don't have museums or galleries, and that can feel alienating," she says. "That's why I love public art—the community engagement it creates while beautifying a town."