By Katie Linder
Public art is popping up around the heart of Iowa City, adding to the vibrancy and charm of the college town. 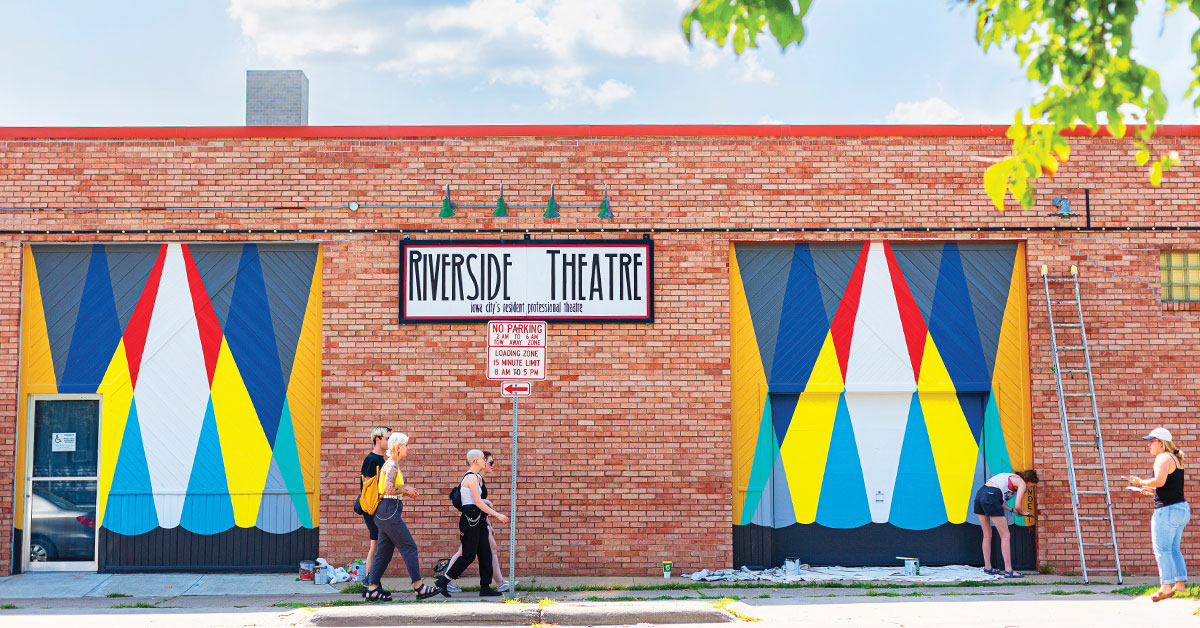 With the stroke of a paintbrush, artists are changing the look and feel of downtown Iowa City.

In a dazzling display of creativity, about a dozen murals have been installed downtown over the past two years—many by artists affiliated with the University of Iowa as students, alumni, or staff. Thomas Agran, the Iowa City Downtown District's public art director and an adjunct assistant professor at the UI School of Art and Art History, is leading that effort through the Iowa City Mural Project.

Agran's ambitious project has taken dark, dumpster-laden alleyways and replaced them with eye-catching artwork that depicts a range of subjects—from the tallest mural, 45 feet of fanciful flowers and charming creatures located outside of U.S. Bank; to a 100-foot-wide Western-themed homage to the founder of MidWestOne Bank with his steed; to a retro robot that feels like it's rolling out of an alley near Fieldhouse Iowa City.

These colorful public murals are inviting people to learn, live, and grow in this creative community. 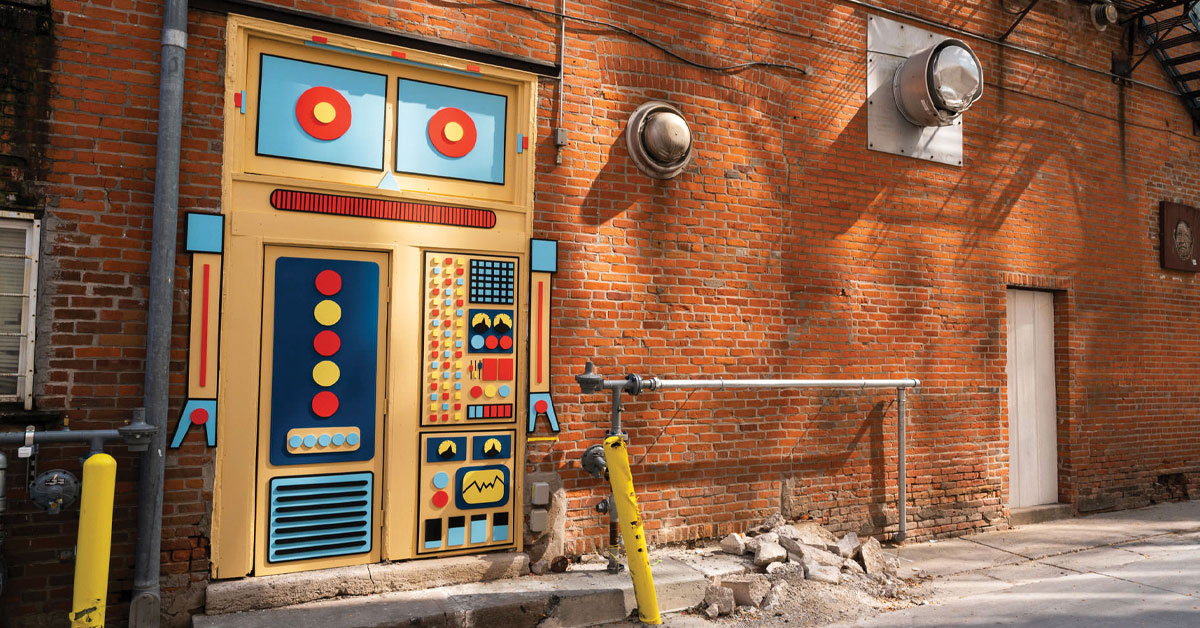 The Iowa City Downtown District is a nonprofit that advocates for and serves local businesses. Funded through a self-supporting municipal levy, the organization works to keep the downtown area thriving and culturally vibrant.

Through the mural project, the district works with businesses and property owners to identify spaces that need a cosmetic lift, connecting them with artists who design and paint murals. Much like the artwork, the benefits of the installations are dramatic.

"When more people use the space, it tends to be cleaner, better cared for, and safer." —Thomas Agran

Projects organized by the district involve a rigorous proposal process that can take six months to a year to complete. Works that are commissioned independently can be finished more quickly. The artwork lasts anywhere from a few years to a few decades, with the temporariness being an asset.

"A mural that feels relevant in 2019 may not feel relevant to that city in 2029," says Agran. "The best murals, the ones that are the most loved, will survive."

The downtown murals provide a unique opportunity for artists—especially UI art students—not only to design and execute a large-scale public mural, but also to be compensated for it.

"To have that lesson, that you can actually get paid for this, is a helpful reminder against the stereotype that you are going to be a starving artist," says Agran. 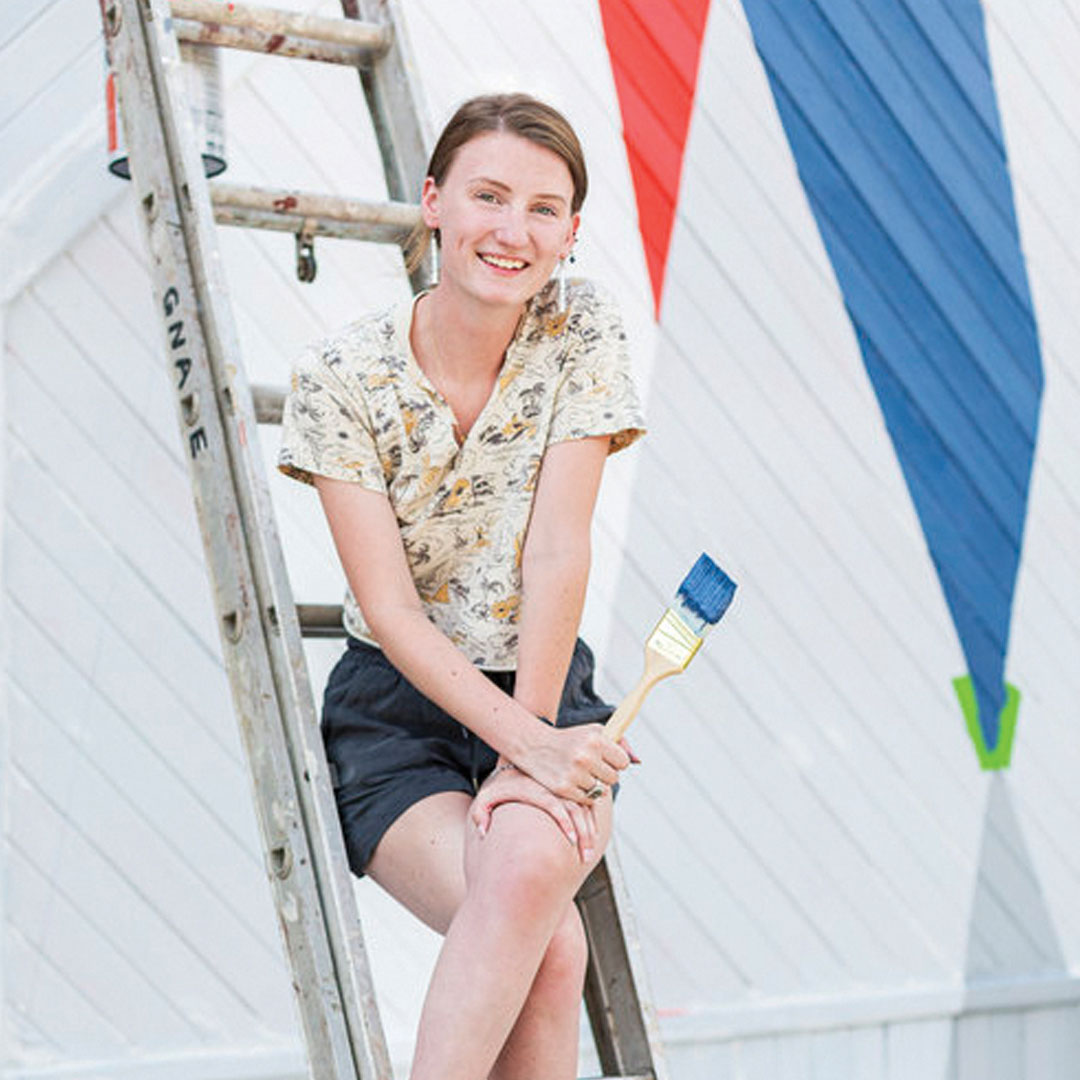 UI art graduate Madeline Mendell (19BFA) designed and painted a mural on the exterior of Iowa City's Riverside Theatre in summer 2019. Her artwork was inspired by theater itself and uses dramatic colors that overlap in a design reminiscent of stage lights.

Before being selected for this project, Mendell thought murals were outside her realm, as she had worked mostly with intricate oil and fabric paintings. "Now I feel I can move forward with new skills and greater confidence to complete more work that will challenge me," she says.

Public murals marry traditional creative methods with manual trade skills, often requiring large scaffolding, lifts, and sprayers. This demanding process, paired with unpredictable outdoor elements, is in stark contrast to a controlled studio environment. However, once the paint and wall connect, the mural can be up and on display in a matter of weeks.

Alexis Beucler (19MA) is an artist living and working in Iowa City while pursuing an MFA degree at Iowa in painting and drawing, with a secondary focus on printmaking. Under Agran's instruction, she completed the UI's Grant Wood Public Art Residency Program, a weeklong, intensive course over spring break that she says helped train her to create several murals in Iowa City and Cedar County last year.

In Iowa City, she worked with the owners of Wild Culture Kombucha to design and install a colorful mural inspired by the waterways in Iowa. She says she hopes her artwork brings people joy, like the other murals in town bring her.

"Sometimes I drive out of my way to go where I need to go, so I can drive past my favorite murals and just feel better," says Beucler. "I feel like it gives a unique energy to the town." 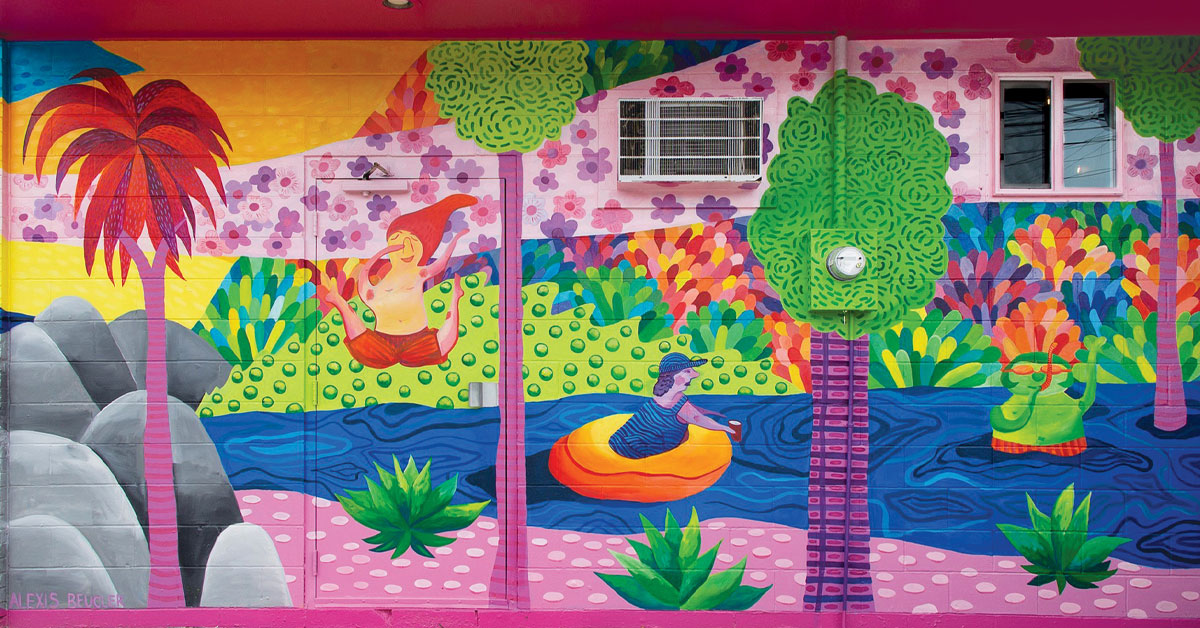 PHOTO: CHRISTOPHER HUNTER/IOWA CITY DOWNTOWN DISTRICT Artist Alexis Beucler was inspired by the riverways around Iowa when she created Wild Culture Mural. The artwork's color, plants, and patterns converted a dreary space into a cheerful spot.

The young artists say that talking with the public as their art progressed made the projects fun and fulfilling. "Even though [residents] aren't actively involved in painting, they feel involved, and I think that makes them feel closer to the community," says Beucler. 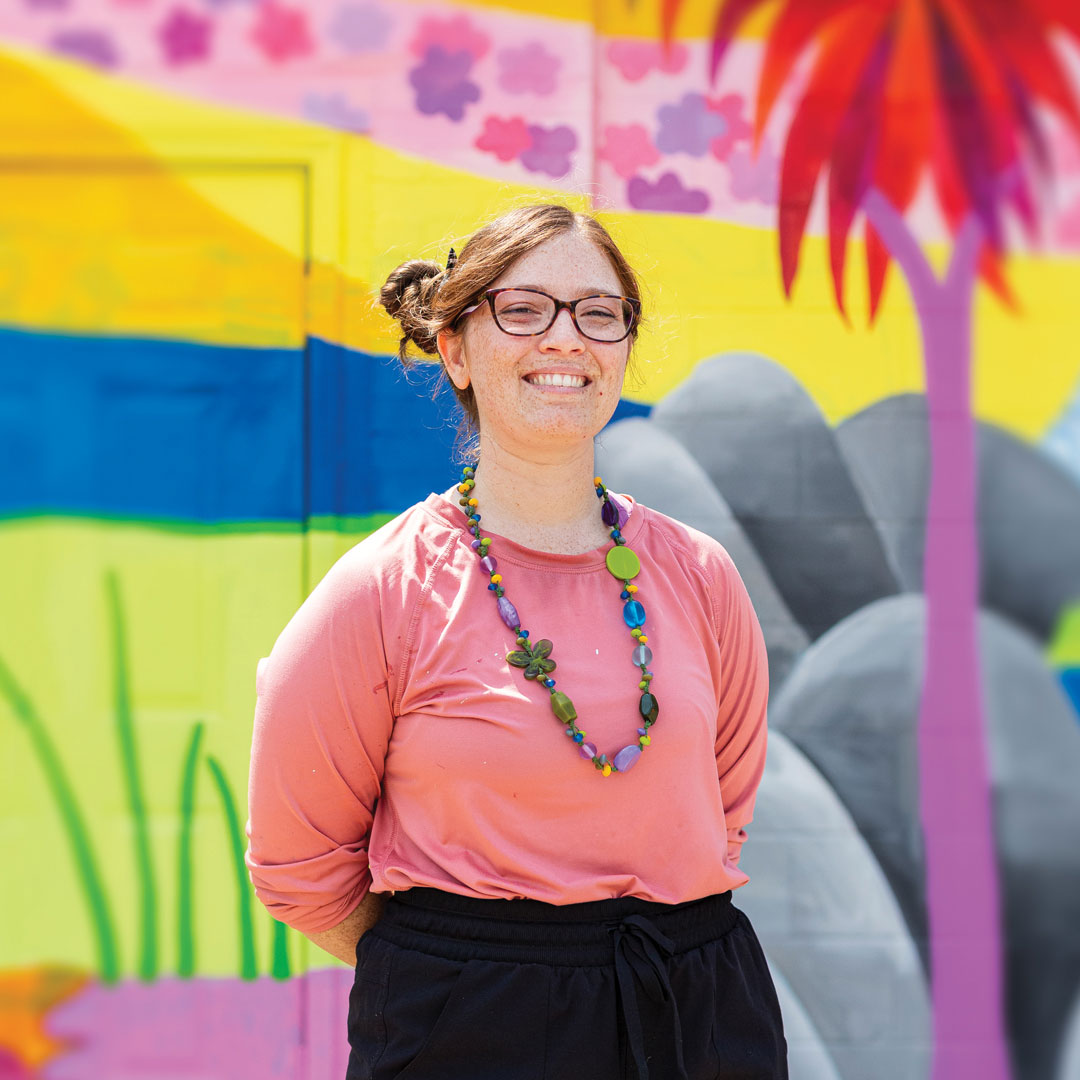 Mendell also found the public engagement enjoyable. "Murals stop people in their tracks and prompt questions and discussions that, in my opinion, bring people together," she says.

"Murals stop people in their tracks and prompt questions and discussions that, in my opinion, bring people together." —Madeline Mendell

That public interaction continues after the work is completed. Beucler says she sees her mural pop up on her Instagram feed frequently. "I love seeing pictures of people standing in front of it doing weird things," she says. "Some people will do handstands or jump with the figurine. That kind of engagement is so much fun."

It's that two-way connection, between the artist and community, that makes this art memorable. In Iowa City in particular, it gives UI students the chance to develop a meaningful relationship with the city they briefly call home.

"Everybody always wants this town-gown [relationship] to be happening and natural," says Agran. "This feels particularly natural to me. Students are excited to be a part of it and can make a mark, so to speak, on the town they are living in, and there aren't always a lot of opportunities as a student to do that." Iowa City artist Thomas Agran works to adhere elements created by local youth to the exterior of U.S. Bank as part of the mural Coexist. Maya Richards, a local teen who worked on the Coexist mural Young artists with the organization United Action for Youth created the mural Coexist under the guidance of professional artist Sayuri Sasaki Hemann. The teens painted the colorful flowers and creatures off site. Their creations were later adhered to the exterior of U.S. Bank.