By Josh O'Leary
Iowa Coach Kirk Ferentz couldn't have paid a more fitting tribute to Hayden Fry than the Hawkeyes' dominant performance against USC in the 2019 Holiday Bowl. 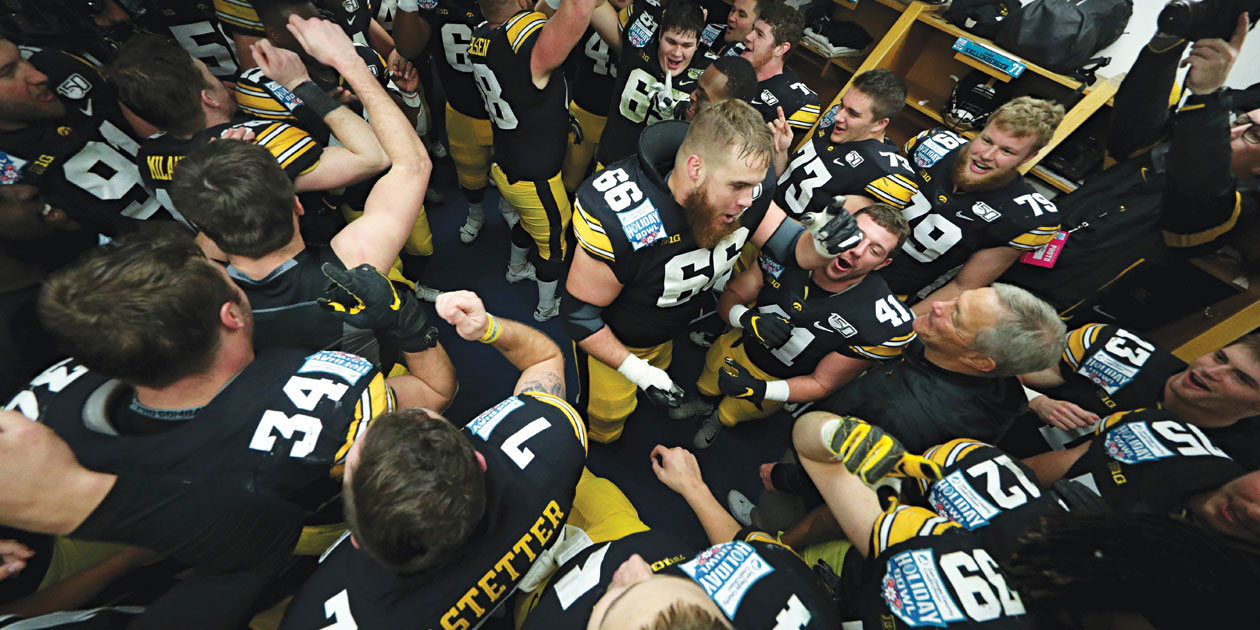 Hayden Fry once said that one of his favorite postseason destinations was the Holiday Bowl, where Iowa recorded memorable victories in 1986 and 1987 and a tie in 1991. Fry also famously loved leading his team in the Hokey Pokey after a big win.

So Coach Kirk Ferentz couldn't have drawn up a more fitting tribute to his predecessor than the Hawkeyes' dominant performance in San Diego this past December—and the postgame celebration that ensued. In its best offensive showing of the season, Iowa trounced USC in the Holiday Bowl 49-24 at SDCCU Stadium to finish with a 10-3 record.

A moment of silence was held before the game and the Hawkeyes removed the Tigerhawks from their helmets in honor of Fry, who died 10 days earlier.

After the game, the jubilant team danced the Hokey Pokey in the locker room. "That was one of Coach Fry's signatures—one of many, actually," says Ferentz. "So that was a nice tribute to him."

Home for the Holiday 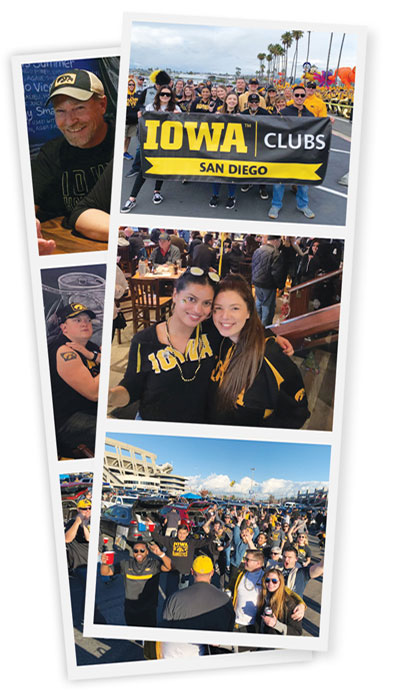 The San Diego Iowa Club hosted scores of Iowa fans visiting California this past December to watch the Hawkeye football team in the Holiday Bowl. During the bowl parade along the San Diego waterfront, club members walked behind the Hawkeye Marching Band in support of the black and gold. "Seeing the streets packed with Hawkeye fans chanting 'I-O-W-A' was incredible," says San Diego Iowa Club President Alyssa Richard (14BA).

The club also hosted a post-Hawkeye Huddle party at its regular game watch location, the PB AleHouse, and a pre-game tailgate at SDCCU Stadium featuring deep-fried turkey legs and corn on the cob.

Once inside the stadium, Iowa fans watched their team trounce USC 49-24, providing a storybook ending to many a Hawkeye holiday. "I still held a grudge against USC for beating us in the 2003 Orange Bowl," says Richard, "so the payback was sweet." —SHELBI THOMAS

Join our email list
Get the latest news and information for alumni, fans, and friends of the University of Iowa.
Sign up now
Related Articles
How Will a Supreme Court Ruling Affect Student-Athlete Compensation?
An Iowa associate professor of law offers insight into what the NCAA vs. Alston case could mean for the future of college athletics.
Iowa Soccer Operations Facility Opens
The Hawkeye Big Ten Tournament championship team celebrates the program's 25th year this fall with a new home.
Celebrating Duke Slater: Iowa Honors Pioneering Football Player
The UI names the field at Kinnick Stadium after Iowa's first Black All-American, a century after he led the Hawkeyes to an unbeaten season.
Former Cyclone Becomes Hawkeye to Honor Her Late Father
In memory of her dad who died of COVID-19, Iowa soccer player Courtney Powell starts a hospital fund to help families with loved ones in the ICU.
Advertisement