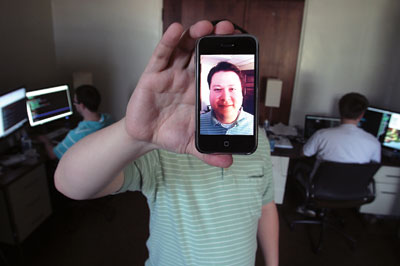 Steve Mitchell could hardly believe the news. "The first time I read the numbers," he says, "I kept reloading the Web page and muttering, ‘No, that's not right.'"

But it was. The iPhone learning application that he and his software development colleagues created had skyrocketed to the top of the heap. Called "Memorize Words for Spanish," the game peaked earlier this year as the fourth most popular in a sea of more than 140,000 educational applications.

The rave reviews from iPhone users clogged Mitchell's inbox, including comments like "I was able to speak basic conversational Spanish within an hour of using the app" and "This has to be one of the most impressive Spanish learning tools I've ever used."

It proved a defining moment—one that forever altered the stature and direction of Mitchell's company, Componica, which he founded in 2004. Although his original intent always was to establish a business that focused on language learning software, Mitchell quickly realized he needed to pay the bills. So, he shifted attention to consultant work in one lucrative area of his expertise: developing programs that allow computers to make intelligent decisions from algorithms and data patterns (also known as "machine learning").

In the summer of 2008, however, Mitchell watched closely as the iPhone soared in popularity. He saw an opportunity to get back to his first passion—and benefit from a profitable trend. Mitchell began to assemble his Spanish database of more than 6,000 words, identifying a person to record the proper pronunciation of each. By the following spring, his team had created a flashcard-type learning tool that adapts to a specific learner's progress—a custom algorithm that "knows" when a person is about to forget a word and responds by showing a reminder flashcard before that happens. The end result is a 90 percent word retention rate.

Since Componica's success with iPhone, mobile applications development has moved to the forefront of its business. Mitchell has already released "Memorize Words for Russian" and "Memorize Words for French" and his future plans include other learning tools for iPhone, such as programs for English as a Second Language (ESL) students and vocabulary games for medical professionals.

Says Mitchell: "I like using math to do something useful."