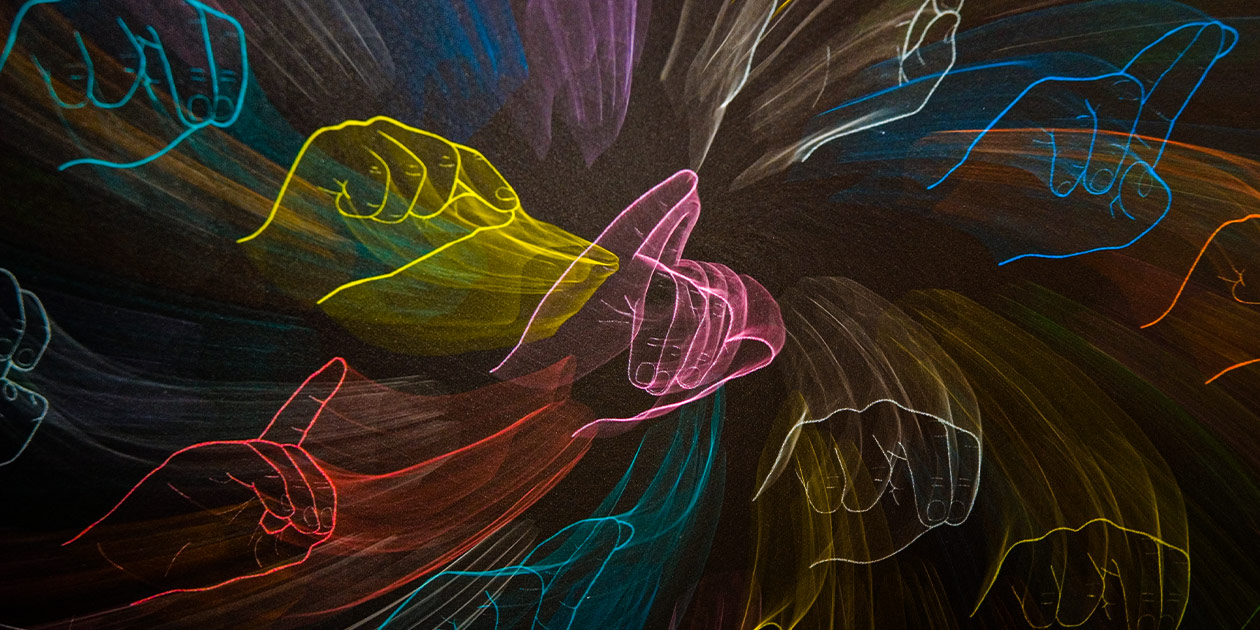 Becca Clark (09BBA), a lecturer in the Division of World Languages, Literatures, and Cultures, who began her exploration of American Sign Language and Deaf culture to communicate with Deaf friends as a marketing student at the University of Iowa

With advances in genetic research and medical technologies, Clark says a time could come when society may ask, "Why should deaf people and sign languages continue to exist?"

From a medical perspective, deafness is often considered a deficit that might be fixed or improved with hearing aids or cochlear implants. But within the deaf community, deafness is a normal—and diverse—way of life that can offer cognitive, cultural, and creative advantages. Students learn about a recent movement within deaf studies known as Deaf Gain, which emphasizes the value of deaf people, deaf culture, and sign languages. "Deaf Gain shows the positive ways that being deaf benefits the individual and that deaf people contribute to society," says Clark. "Instead of losing your hearing, you can say that you are gaining your deafness."

Students hone their American Sign Language skills while discovering the benefits of human diversity. They learn how sign languages have transformed the field of linguistics and helped illuminate how language is stored and processed by the human brain. They watch sign language poetry and literature to discover new wordplay, rhyming schemes, and forms of human expression.

The class also challenges the concept of normalcy and explores the different ways society upholds it. That includes comparing architectural designs created with and without deaf individuals in mind and discussing differing perspectives on laws that impact deaf people such as the Individuals with Disabilities Education Act (IDEA).

Students then take what they've learned throughout the semester to create guides for parents of children who have been newly identified as deaf or hard of hearing to provide educational resources and help them embrace Deaf Gain.

Mitch O'Meara, who is majoring in human physiology with a minor in American Sign Language, plans to become a pediatric ENT physician after two formative life experiences. As a child, he had more than 10 surgeries to try to restore hearing in his left ear. The UI senior from West Des Moines later became interested in American Sign Language when his younger sister, who has Down syndrome, first started to communicate through baby sign before developing speech.

"I believe the field of medicine desperately needs someone who is educated on ASL and the deaf community so that holistic and positive support can be provided to families," he says. "After this class and my prior coursework in ASL, I'll be able to be a strong advocate to help families make the best choices for their children."

Learn more about the ASL program at Iowa.
Join our email list
Get the latest news and information for alumni, fans, and friends of the University of Iowa.
Sign up now

DID YOU KNOW? Within ASL studies, it's common to lowercase the word deaf when referring to the audiological condition and capitalize the word when referencing an affiliation with the cultural and linguistic community.

Join our email list
Get the latest news and information for alumni, fans, and friends of the University of Iowa.
Sign up now
Related Articles
How Can You Manage Your Kids' Social Media Use?
Meghann Foster and Nick Westergaard, parents and University of Iowa social media experts, share tips to help families decide whether their children are ready for online accounts.
Meet the 2020 Write Now Contest Winner
In Lorie Leo's winning entry from the University of Iowa's flash writing competition, an unexpected visitor crashes a wedding at the Iowa Memorial Union.
The Frontiers of Film
UI film students examine media that capture the essence of America's pioneering spirit.
Old Gold: Slaughterhouse-Five Turns 50
Kurt Vonnegut's best-selling novel, which came to fruition at Iowa, became emblematic of the anti-war movement when it was released 50 years ago this spring.
Advertisement