Author Kurt Vonnegut Jr. arrived in Iowa City in late summer 1965 to teach at the Iowa Writers' Workshop and stayed less than two years. Yet Vonnegut's time at the University of Iowa proved to be among the most intense and productive of his distinguished career as one of America's foremost fiction writers in the 20th century. 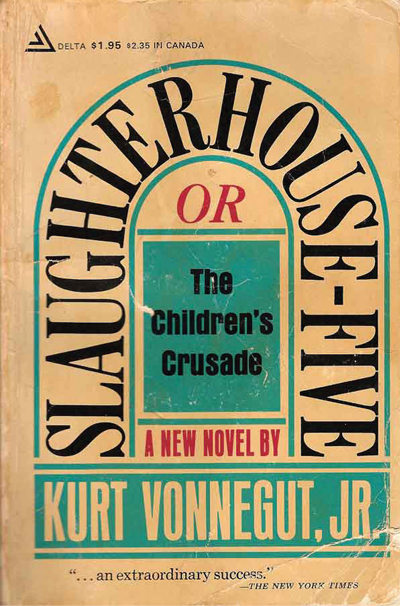 It was in Iowa City where Vonnegut transformed the "Dresden novel," as he called it in its early draft stages, into Slaughterhouse-Five, or The Children's Crusade. Vonnegut's first best-selling novel dramatically advanced his rank among contemporary authors of the time. The book rose to the top of The New York Times' best seller list and became emblematic of the anti-war movement when it was released 50 years ago this spring.

With elements of autobiography and science fiction, Slaughterhouse-Five recounts the life of Billy Pilgrim, an American soldier who survived the horrors of the firebombing of Dresden during World War II. Vonnegut, himself a survivor of the ordeal as a prisoner of war, had accumulated notes about his experiences for over 20 years, attempting to produce a novel that would capture the horrors and futility of war. His work came to fruition during his Iowa City sojourn.

During those years, Vonnegut interacted with painters such as UI art professor Byron Burford (42BFA, 47MFA) and taught the likes of Andre Dubus II (65MFA), Gail Godwin (68MA, 71PhD), and John Irving (67MFA). Vonnegut also enjoyed hosting parties in his stately, if wellworn, Victorian-era brick home on North Van Buren Street. MarĒa Pilar Donoso recalled one such party in honor of author Saul Bellow, according to the UI literary history website litcity.lib.uiowa.edu: "Although Vonnegut is a very timid human being, [on] the night of Saul Bellow's party he was quite relaxed and animated. Perhaps this was because the guests were professors and students, everyday characters, who freed him of the tensions produced by meeting new people."

"Slaughterhouse-Five is wisdom literature. It is a book of awe and humbling clarity. Its lessons are so simple that by adulthood most of us have forgotten or taken them for granted only to be stunned upon being reacquainted with their fundamental gravity." - Kevin Powers, The New York Times

In spring 1967, Vonnegut left the Workshop when a Guggenheim award provided him with the opportunity to return to Dresden for the first time since the war. The trip was a disquieting experience that revealed to Vonnegut the remnants of warŚpervasive ruins even after a quarter-centuryŚthat prodded him to complete the novel. It was released two years later.

The timing of Slaughterhouse-Five couldn't have been more fortuitous. As Vonnegut's former Workshop student Loree Rackstraw (66MFA) wrote in Love as Always, Kurt: Vonnegut as I Knew Him, Slaughterhouse-Five was penned "during a period when the United States was moving into a turbulent election year, which was made all the more dramatic by political and social eruptions in civil rights, environmental concerns, and the feminist movement. To say nothing of the Vietnam War."

Slaughterhouse-Five continues to resonate with readers today. Kevin Powers, writing in The New York Times recently, referred to his own war experience in Iraq and observed: "Slaughterhouse- Five is wisdom literature. It is a book of awe and humbling clarity. Its lessons are so simple that by adulthood most of us have forgotten or taken them for granted only to be stunned upon being reacquainted with their fundamental gravity."

Those who have endured the horrors of war, and those close to them, understand what Powers'Śand Vonnegut'sŚwords mean.