A Kiowa Storyteller Celebrates His Heritage with a PBS Film

By Josh O'Leary
Filmmaker Jeffrey Palmer presents his first feature-length documentary, N. Scott Momaday: Words from a Bear, in honor of the father of the modern Native American literary movement. 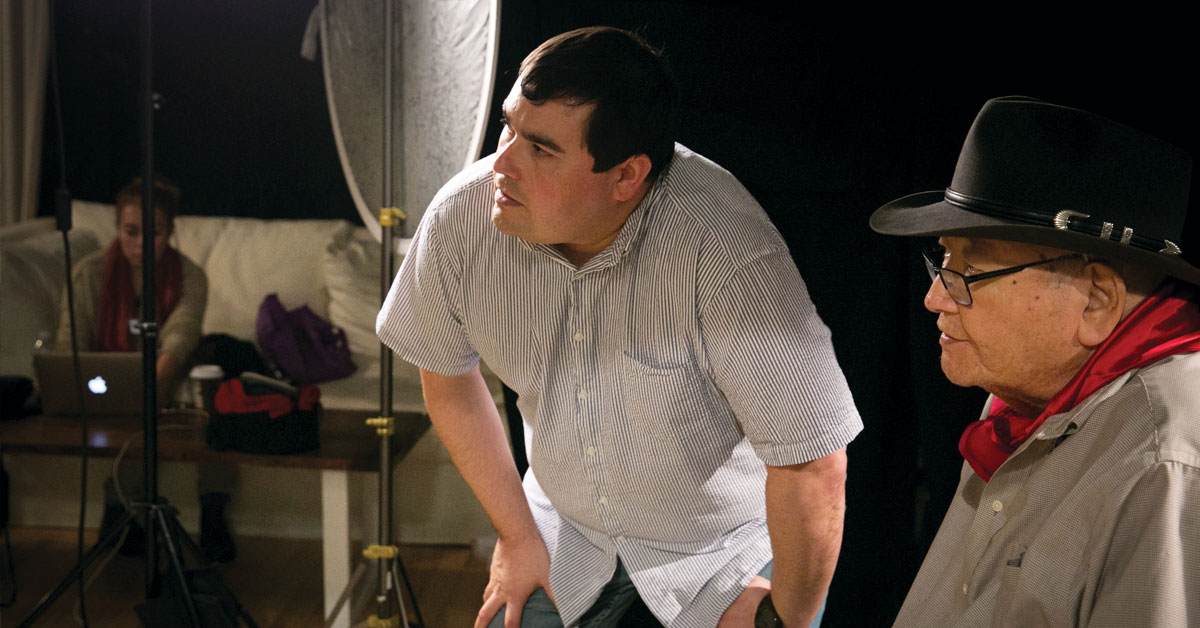 Today, Palmer (12MFA) is carrying on the Kiowa's storytelling tradition. A documentary maker and assistant professor in performing and media arts at Cornell University, Palmer presented his first feature-length film, N. Scott Momaday: Words from a Bear, at the 2019 Sundance Film Festival. The documentary, which was commissioned by PBS's American Masters series and aired nationally this past November, examines the life of Momaday, a Kiowa author who won a Pulitzer Prize for his landmark 1968 novel House Made of Dawn.

Palmer was a child when he first met Momaday at a Fourth of July pow wow in Carnegie, Oklahoma, the home of the Kiowa Tribe. Palmer's father, Gus—a writer and linguist—introduced him to Momaday, a giant in both literature and in stature. "He was 6-foot-4 and had a voice like Darth Vader," says Palmer. "It was a big moment in my life because I realized there's so much more that Kiowa people could do."

Palmer went on to attend the University of Oklahoma, where he earned a bachelor's degree in cultural anthropology and a master's in Native American studies. There he conducted ethnographic interviews with indigenous people and wrote his thesis on the exploitation of Native Americans in early cinema. He later tested the waters in law school before changing course. "One day I woke up and said, 'I really love making films, but I don't know that I really love doing all the things I'm doing right now. Maybe I should take a shot at applying to film school.'"

As a dean's fellow in the University of Iowa's film and video production program from 2009 to 2012, Palmer studied documentary film and video installation under professor emeritus Leighton Pierce (81BA) and former associate professor Sasha Waters Freyer. He soon found his voice telling stories about Native people. After earning an MFA from Iowa, he screened a short film titled Isabelle's Garden at Sundance, where he caught the eye of PBS. When producers began planning an American Masters film on Momaday, they reached out to Palmer.

"It changed my life," Palmer says of PBS taking a chance on a first-time filmmaker. "I couldn't have asked for a better story; this is the one that was made for me."

Palmer spent nearly four years filming and editing Words from a Bear, which includes interviews with many of Momaday's high-profile admirers. Among them were actors Robert Redford and Jeff Bridges, and writers like current U.S. poet laureate and Iowa Writers' Workshop alumna Joy Harjo (78MFA). Palmer also spent extensive time with Momaday, who is now 85 and living in Santa Fe, New Mexico.

To create the film's evocative animations, Palmer enlisted fellow UI cinema graduate Kelly Gallagher (15MFA), an experimental animator and assistant professor of film at Syracuse University. "As an indigenous filmmaker, I always see things on the level of the ancient," Palmer says. "We have to go back to our ancestors' stories to really understand who we are and how we're grounded. In Words from a Bear, we do it through several interludes of ancient stories done in animation."

Since debuting for an audience of about 600 people at Sundance, the film has been screened at more than 50 film festivals around the world and collected accolades like the Ted Turner Award at the Bozeman Film Celebration. Palmer was commissioned for two new short films that debuted last year: Disqualified Warriors for PBS and Sounds of Life for the Healthy US Collaborative.

Palmer hopes younger generations of Kiowas will find Momaday as inspiring as he did that first time they met. "It's important for them to know we can do great things," he says.