A Conversation with Joy Harjo, the New U.S. Poet Laureate

By Josh O'Leary
5 minute read
The artist reflects on becoming the first Native American to hold the title, her time at Iowa, and the current state of poetry. 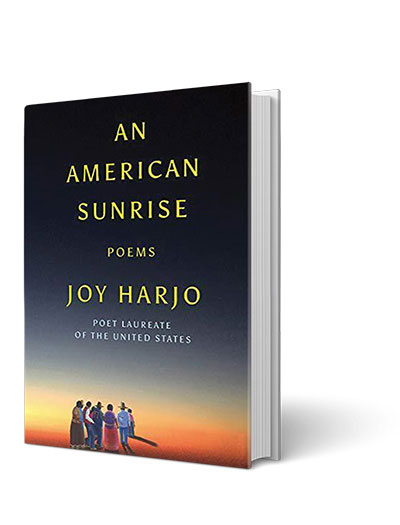 Harjo, a member of the Muscogee Creek Nation, has been a champion of the arts and poetry—which she calls "soul talk"—for decades. Since studying at the Iowa Writers' Workshop in the 1970s, she's authored nine books of poems, including the recently published An American Sunrise. She's also recorded four award-winning albums and performed internationally with her jazz/rock band, the Arrow Dynamics, in which she sings and plays saxophone and flute.

Harjo, who lives in her hometown of Tulsa, Oklahoma, recently spoke to Iowa Magazine about her new role as poet laureate, which she began in September. Here's our conversation, edited for length and clarity.

What was your reaction when you learned you would be the next poet laureate?

As you can imagine, it was rather shocking and electrical. That was followed by a moment of overwhelm as I considered the tremendous responsibility, and alongside that the thought, "What an opportunity." I have begun settling into the position, but the energy hasn't quite calmed down—not yet.

How meaningful is it for you to be the first Native American to hold this position?

What has been most exciting is that the position presents a door, a presence that announces, "Yes, natives are still here, they are alive, and yes, some of us are poets." The response has been overwhelming, coming from all across the country.

What was your time in Iowa City like in the 1970s?

It was difficult to move from familiarity into a strange land. I had grown up in Oklahoma, where we have 39 tribal nations, and went to an all-native arts high school in New Mexico, then to the University of New Mexico, which was at the center of many native populations. I brought with me a different kind of poetry aesthetic, one that I couldn't quite voice in workshop language. I was the only single-parent student in the program with children, and that made my experience also different. But I found quite a community of writers there, especially in the International Writing Program.

What kinds of poems did you write in those days?

I had my own kind of constituency, or way of writing, and it didn't quite fit in with what everyone else was doing, so it was a challenge. But I enjoyed being around other poets who were involved in the same kind of endeavor. I made some good friends there, like Sandra Cisneros (78MFA), Dennis Mathis (78MFA), Jayne Anne Phillips (78MFA), and many others. One of my favorite teachers was Donald Justice (54PhD). He took time with me and went over my poetry seriously, and that mattered to me. I also hung out a lot at the International Writing Program and loved spending time with those poets.

Can you tell me about your new book, An American Sunrise?

I had not expected to write a book of poetry when the spirit of what became An American Sunrise surprised me. I was at the beginning of my last teaching semester at the University of Tennessee, Knoxville. I looked out into the trees one morning—the same trees that my great-grandfather seven generations back, Monahwee, had looked at when he used to steal horses here, just above the Tennessee River. I knew I would be leaving soon. My spirit asked me, "What did you learn here?" And there it started. It's about being removed from our homelands to Indian territory, which was essentially being forced out of a kind of paradise.

As poet laureate, what will your duties involve?

I am essentially an ambassador of poetry. I'll be traveling and meeting with communities, and I've started planning a project that will highlight native poetry and communities, and this mapping will show how we are all related through poetry.

Will you spend much time in Washington?

No, although more than usual. I have several projects I'm juggling, and the Library of Congress is a huge repository of materials, from songs to rare manuscripts. I have been exploring the Library of Congress, which is the world's largest public library. It's amazing what they have in terms of poetry collections, comic books, photographs, manuscripts—I even got to hold Walt Whitman's cane. They have quite an online catalogue; it's an incredible digital storehouse. And I love it that I have a desk there.

You're currently writing a new musical; what's it about?

It's a full-length musical play that pursues the contributions of southeastern native music to blues and jazz. We follow the story of a young Tulsa band as they uncover this origin story—a story that leads back over the Trail of Tears. It's about family and music, being a musician, and being in a community where the quality of living is being threatened by social and climate injustice.

What's the current state of poetry?

Because of the state of national affairs these days, and the general uncertainty in the world, people turn to poetry as we do at all times of transformation and change. Those transformational moments of birth, death, marriage, falling in love, falling out of love, occur in the national or global body. Poetry provides a means to move through history with acute corporeal and spiritual awareness.