View All From You
Share
IOWA Alumni Magazine | November 2017
Family Tree
By Lara Carlson Dolphin, 95B & Garth Dolphin, 94BSE, 97MS
Love, family, the UI, and a tree that brings it all together. 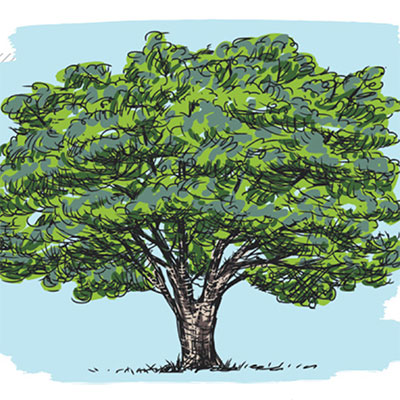 In 1994, we purchased a 6-foot-tall red oak tree, went to our favorite spot on the UI campus near the river, dug a hole, and planted it. We said the tree represented our love and would grow and flourish over the years. Lara was concerned that something might happen to the tree, but Garth promised to use it to build an item for the home we would eventually share if it were ever in danger. Garth figured oak trees must live for 70 to 100 years, so there was a good chance that he wouldn't have to worry about it.

Fast forward to a 2011 visit to Decorah, Iowa, where Lara's dad handed us an article from the Cedar Rapids Gazette. According to the newspaper, a plan was in the works to tear down Hancher Auditorium because of the 2008 flood and relocate it—to the site of our tree. Lara was devastated. Garth sent emails to the UI facilities director, detailing the location and history of the tree. The earthwork contractor was contacted to ensure that the tree would be saved.

Just one small task stood in the way of bringing the tree to its final location: traveling 1,126 miles—from Connecticut to Iowa—in February. A good friend of Garth's, inspired by the idea of driving halfway across this great nation for a piece of wood, decided to go with him. The 16-hour drive went by quickly. Maybe it was the thrill of the chase or the great conversation, which was only slightly dampened by blinding snow.

They arrived at 4 a.m. in Iowa City, where it was minus-2 degrees. After less than an hour of sleep, Garth called the contractor. When the supervisor met them on site, he informed Garth that they would have to wait for a project consultant to show up and open the gates to the property. Garth got his chainsaw ready, but when the consultants arrived, they told Garth that the tree could not be removed because the UI had not officially released the property to the contractor. After a lengthy discussion, Garth was strongly encouraged to return to Connecticut without the tree.

After much deliberation, Garth pulled out the page from Lara's scrapbook he had brought along. On it was the original receipt for the tree ($36.75) and several pictures from planting day. Garth apologized for digging a hole on the campus all those years ago, and he respectfully informed the construction manager that he would be taking OUR tree with him. Finally, Garth was granted permission to take the tree.

With a satisfying crack, the now 35-foot oak fell to the snow-covered ground. Garth loaded the trunk and large branch sections into the truck, then shared some well-deserved chuckles and handshakes with the contractors and engineers. Not willing to make this an easy trip, Mother Nature dished up an 800-mile snowstorm for a 19-hour return trip to Connecticut.

Once home, the tree was milled, sanded, and fitted onto the new fireplace. The new mantle was much more than a simple piece of wood; it meant commitment, love, and following through. Little did we know when we planted this tree so many years ago that we would be sitting around it during the holidays with our children, remembering all of our blessings.