S tanding practically nose-to-nose, two angry women scream in each other’s faces. Their shrill voices barely register over the increasing din of the irate crowd, but their hostile body language speaks volumes. In the background, holiday music plays loudly—messages of peace and harmony that sound a discordant note at this acrimonious gathering.

This scene took place several weeks ago, when presidential hopeful Michele Bachmann stopped at Iowa City’s famed Hamburg Inn to speak to supporters during her caucus campaign. As exchanges between Republicans, Democrats, and local Occupy Iowa City protestors became more heated, Bachmann’s campaign organizers cranked up the music to try to drown out the boos and jeers. 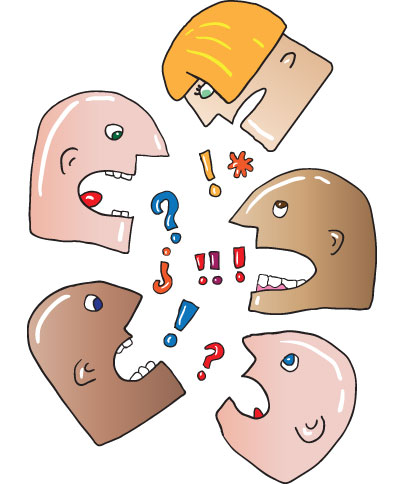 Tempers continued to flare, though, and Iowa City police eventually intervened to restore order—temporarily, anyway. Sadly, such clashes are increasingly common now when Americans talk politics. Ironically, these protests took place only blocks from the University of Iowa campus—home to one of the nation’s best debate teams and repository of the official papers of a pioneering figure in the area of public discourse. What would A. Craig Baird—former UI professor and vociferous champion of civil debate—say about those sad events? Probably something similar to his commencement speech at the UI in 1952.

On that occasion, reading from a speech titled “The Responsibilities of Free Communication,” he told his audience of newly minted graduates that they must “reject communication as the primitive art of arousing the emotions…. College graduates, as well as reporters, columnists, congressional investigators, must join in the search for intelligent answers to intelligent questions.”

Only a few years earlier, American troops had fought and died in a brutal war against fascism in Europe. As Baird spoke, more Americans were helping Korean allies fight a different totalitarian regime. Even those green young men and women at commencement knew the importance of free exchange of ideas to a democratic government. What Baird wanted them to understand was their role in keeping those freedoms alive.

Before teaching his final class in 1969, Baird would write or edit more than 30 books on speech and public discourse, host weekly discussion programs on UI radio WSUI, and serve as director of the Iowa High School Forensic League for more than two decades. In his time, he was one of the most important thinkers on the issue of civil debate. 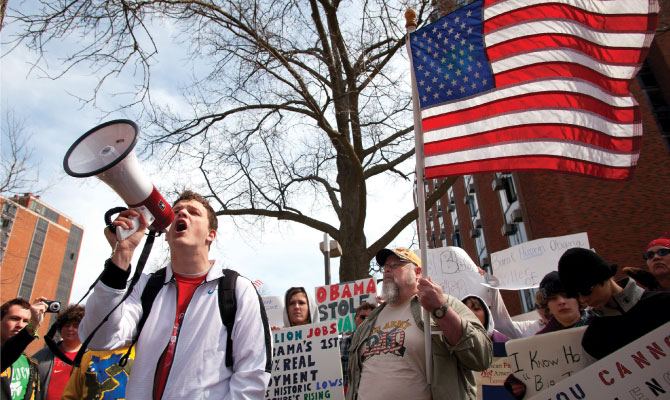 Undoubtedly, he would have approved of a symposium organized this past fall by the UI Public Policy Center, a multi-disciplinary think-tank that conducts academic research to help inform policymakers. “Conflict and Civility in Public Discourse—Where Is the Line?” attracted expert speakers, who examined topics such as the historical roots of public incivility, the role of the media and social networks, and efforts to improve the situation.

What exactly is civility? Civilpolitics.org, which provides a clearinghouse for research and approaches to improving America’s political dialogue, defines it as “the ability to disagree with others while respecting their sincerity and decency.”

Former Iowa Congressman Jim Leach, who delivered one of the UI symposium’s keynote speeches, agrees. “Argument implies that you don’t only speak; you also listen,” he says. “You have to use your ears and not just your mouth. That doesn’t mean that you can’t be a conviction conservative or a conviction liberal, but it does mean that you recognize that there can be a basis for other convictions.

“One of the great challenges is to develop an instinct for respect, particularly for people with whom you most disagree.”
Jim Leach

Of course, it’s much easier to point fingers at what others are doing wrong rather than assume any responsibility for being part of the problem. Many Americans seem to interpret the First Amendment to the U.S. Constitution as only their right to freedom of speech. Far less attractive is the responsibility to speak as citizens, to address important issues of the day in a constructive way.

Just this past December, at an event on the UI campus, a protester shouted down Republican presidential hopeful Newt Gingrich, yelling: “You seem to have a Ph.D. in cheating on your wife!”

Such nasty jabs and low blows are no less damaging for being verbal rather than physical. But, do they “cross the line” of acceptable behavior?

During the opening session of the UI symposium, Public Policy Center Director Peter Damiano, 82BS, 86DDS, noted that it’s difficult to draw a hard and fast line of what’s acceptable. “Sometimes, change does need people to stand up and scream,” he said, referring to the founding of the United States and the civil rights movement. Still, as he pointed out, when the U.S. Constitution was being drawn up and some delegates didn’t agree with the proposals, the group worked together to reach an acceptable compromise.

Essentially, America’s political system depends on a rational exchange of views; it relies on healthy debate that, ideally, leads to the best ideas for mutual governance. As Baird told the class of 1952, “Ours is a government of talk…. Only thus can we have mature opinion and responsible action.”

In today’s polarized political landscape, though, such a marketplace of ideas can seem like an optimist’s dream. “There’s a social cleavage of attitudes that is very stark today—and surprisingly uncompromising,” says Leach, now chairman of the National Endowment for the Humanities (NEH). When he was first elected to Congress in 1978, Leach says all the politicians “considered themselves part of a decision-making body.” Today, majority parties feel they don’t need to listen to the minority, and party-line voting is the norm.

Leach, a lifelong Republican, has long been recognized as a civil and bipartisan statesman, refusing to run negative campaigns for office or even to allow third parties to run distasteful advertisements on his behalf. After his appointment to the NEH by Democratic President Barack Obama, Leach launched a nationwide 19-month “civility tour" that highlighted the dangers of “the divisive rhetoric of anger.”

Some audiences were skeptical, he says, thinking he was calling for “namby-pamby” public dialogue that avoids contentious issues. In fact, a call for civility doesn’t mean people shouldn’t disagree—even passionately; ideas and solutions need to be vetted, tested, tossed around, and examined before they are implemented.

“There’s a view among some that compromise is weakness,” agrees Damiano. “But you can’t move forward on making the best policy if you’re not willing to listen to people across the aisle.”

Back in 1952, Baird called for everyone, regardless of public position, to honor civility, to value facts, and to model rational thinking as a matter of civic duty. Another speaker at the recent UI symposium argues that such concepts are relatively foreign to many people today. Jean Bethke Elshtain, a professor of social and political ethics at the University of Chicago, contends that Americans have all but lost the distinction between private interests and public responsibility, and that the concept of a “common good” has been trampled by individual “rights.” As she explained, “Everything is evaluated through the prism of ‘me’.”

Perhaps more importantly, because of new communications technology, many people have also lost a sense of community. In a talk titled “Have We Lost a Culture of Democratic Argument?” she examined the ways in which social media have loosened vital ties. “Our lives are suffused and penetrated by this new medium,” she said. Social networks promise “community on the cheap,” an easy, quick way to friendship—without the hard work, time commitment, and “messy stuff” of real relationships. People don’t communicate any more, she added: “they message each other.” They are friends “without the depths, tones, and tensions of real friendships.”

Such changes strike deep at the foundations of American life and politics. “Communities lie at the heart of a flourishing democratic society,” Elshtain said. “[They bind us] to other people, a time, and a place.”

During World War II, every household got behind the war effort, buying war bonds, planting victory gardens, and volunteering for civil defense efforts. Americans rode that wave of civic consciousness well into the next decade. But imagine a president today standing up to deliver anything like John F. Kennedy's famous 1961 inaugural message: “Ask not what your country can do for you; ask what you can do for your country.”

If America’s democratic principles are indeed at risk, what can be done to save them? From Leach’s point of view, a change for the better needs to start with the public. If voters don’t reward combative, partisan politics, it won’t flourish; if they start rewarding public servants for quality and decency, the tide will shift.

Elshtain says that the answer is “to simultaneously be kinder and more demanding of what we expect from our leaders and from ourselves.” Her words echo Baird’s sentiments from 1952, when he told those UI students, “We come back to this familiar matter of your responsibility. All citizens, official or not, must be held accountable for what they say or write.”

Historically, institutes of higher education have been a critical resource for instilling and practicing such democratic principles.  As in Baird’s time, the UI today continues to teach students to question and explore in their search for truth—while also respecting diversity of values and beliefs.  Like many other institutions around the country, Iowa also recently began to introduce students to the concept of civic engagement. The Community-Based Learning Program aims to “actively promote students’ life-long citizenship and learning” by involving them with off-campus communities through volunteerism, service learning courses, and nonprofit internships.

Beyond the academic realm, numerous organizations like the Public Conversations Project, the Project on Civil Reflection, and CIRCLE, the Center for Information & Research on Civic Learning and Engagement, are spearheading similar efforts to revive America’s civic spirit and engagement.

Of course, there’s no easy road back to a more civil public discourse, but positive signs are beginning to appear. Around the country, schools actively promote anti-bullying campaigns, media engage in tighter monitoring of comments on their websites, and moderators during this fall’s Republican presidential debates gently reminded candidates to stick to the question.

And, just a few weeks ago in Iowa, national media witnessed the epitome of civil discourse at the caucuses. Organizers of the UI symposium deliberately timed the conference to fall close to these important four-year events. Across Iowa, thousands of voters gathered at libraries, schools, and homes to determine the best potential presidential candidate.

They expressed their views and exchanged ideas. They argued, but they also listened—to each other’s perspectives, and to the sound of democracy in action.

Some information in this article courtesy of: Papers of A. Craig Baird, University of Iowa Archives, Iowa City, Iowa.

Join our email list
Get the latest news and information for alumni, fans, and friends of the University of Iowa.
Sign up now
Related Articles
Iowa Football Alumni Cultivate Change
How former Hawkeyes are tackling issues of diversity, equity, and inclusion to strengthen the program
EXTRA: 'Hawkeye Heaven' Photo Gallery
Iowa Alumni Magazine invited readers to share photos of their black-and-gold sanctuaries. Here are their rooms and other Hawkeye treasures.
Collectors Items
Are you ready for some football--memorabilia? Hawk fans proudly show their favorite Iowa treasures.
Fight for the Future
Campaign student volunteers experience the thrill of democracy in action.