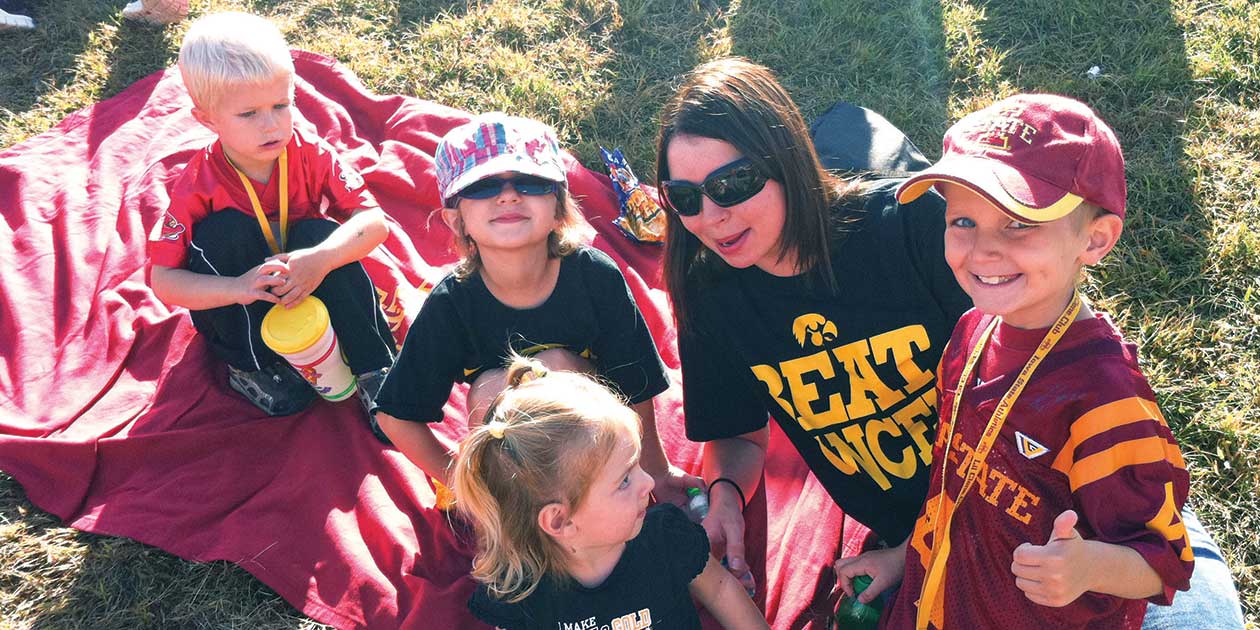 Aaron Horn helped turn a rivalry into a rally cry. In 2009, the Iowa State graduate joined several other families whose children were diagnosed with pediatric cancer in selling Beat Cancer T-shirts to raise awareness and fund childhood cancer research and support programs. Inspired by the Beat State and Beat Iowa apparel, the shirts unified Hawkeyes and Cyclones against a common opponent and led to the launch of Beat Cancer Today in 2012. Throughout the past decade, the nonprofit organization has raised more than $505,000Śincluding $155,000 for University of Iowa Dance MarathonŚto give back for all the support Horn and other families facing pediatric cancer have received.

In 2007, HornÆs son Eli was experiencing stomach pain and having trouble walking. A biopsy at UI Stead Family ChildrenÆs Hospital revealed he had neuroblastoma, a cancer often found in the adrenal glands. Aaron and Eli made frequent trips from Ames to Iowa City, as well as to New YorkÆs Memorial Sloan Kettering Cancer Center, where Eli underwent multiple surgeries, antibody treatments, chemotherapy, and radiation. They stayed at a nearby Ronald McDonald House in New York where they met fellow Iowan Stephanie Cotton Horn (07BSN) and her daughter Dakota, who was also diagnosed with neuroblastoma. 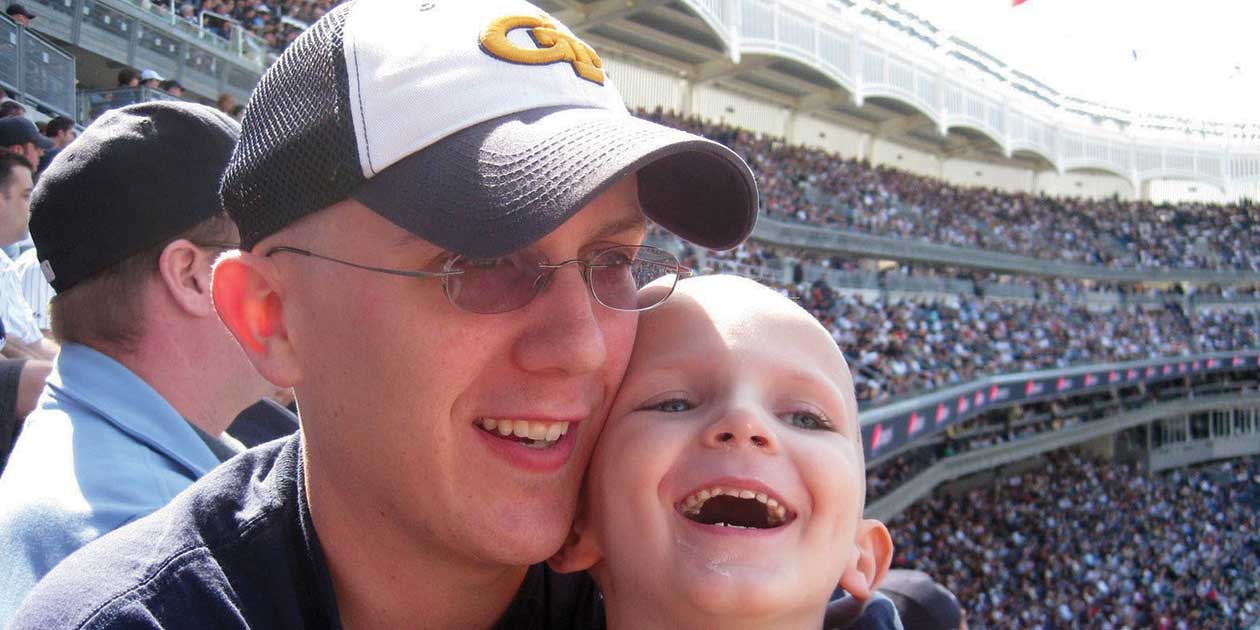 PHOTO COURTESY AARON HORN In 2009, Aaron Horn and his son Eli make memories at a New York Yankees game, thanks to the Ronald McDonald House.

The four quickly bonded. Along the way, they received ongoing support from UI Dance Marathon, including hospital visits, gifts, and events to connect them with other families going through the same challenges. ōBecause Dakota was diagnosed at such a young age, she didnÆt really understand until she was much older that cancer was a bad thing,ö says Stephanie. ōThe Dance Marathon kids were a huge part of that. She felt their love and support at every step along her journey.ö

A few weeks short of his eighth birthday in 2012, Eli died of leukemia. Dance Marathon helps keep his memory alive by reading his name and lighting a candle in his honor every year at the Big Event. Dakota, now 17, completed her treatment in 2014Śthe same year Aaron and Stephanie wedŚand is an active volunteer for Beat Cancer Today.

Thirteen years after the Beat Cancer shirts were created, they continue to raise awareness of an opponent that thousands of children battle each year. ōBefore Eli was diagnosed, it didnÆt really hit home for me that kids get cancer,ö says Aaron. ōAwareness is such a big thing for us, and these shirts are a great way to open a conversation.ö

The Next Big Event

UI Dance Marathon is a student organization that provides year-round support for pediatric cancer patients and their families. Its next 24-hour fundraiser will be Feb. 3¢4, 2023. Visit the Dance Marathon site for more information and to support UI Stead Family Children's Hospital patients.

The Next Big Event

UI Dance Marathon is a student organization that provides year-round support for pediatric cancer patients and their families. Its next 24-hour fundraiser will be Feb. 3¢4, 2023. Visit the Dance Marathon site for more information and to support UI Stead Family Children's Hospital patients.

Join our email list
Get the latest news and information for alumni, fans, and friends of the University of Iowa.
Sign up now
Related Articles
After Cancer Fight, UI Senior Gives Back with Dance Marathon
The student organization's finance director knows firsthand what patients are up against.
Army Turns to Iowa Experts as It Overhauls Fitness Standards
The UI's Virtual Soldier Research Program puts the Army Combat Fitness Test through its paces.
Terrapin Fan Funds New AEDs After Cardiac Emergency at Iowa Basketball Game
Stan Goldstein collapsed inside Carver-Hawkeye Arena while cheering for the Maryland men's basketball team. After receiving life-saving care at Iowa, he made a gift to say thank you and help others who may experience a similar crisis.
Family Keeps Cancer Patient's Memory Alive by Supporting Iowa Research
In the decade since Tad AgnewÆs death, an annual Davenport fundraiser has brought together his friendsŚand more than $350,000 to support the UI Holden Comprehensive Cancer Center.