By IM Staff
The latest University of Iowa alumni and faculty achievements, including from the WWE’s Big E and Shark Tank contestant Erica Cole.

Patrick Highland (20MS, 22PhD), an experimental test pilot for the U.S. Air Force, has been promoted to the rank of lieutenant colonel.

Laurel Sanders (21PhD) is an assistant professor of history and American Indian studies at the University of North Dakota.

Justin Dewey (10BA) is the director of marketing at The Public Theater in New York, overseeing marketing and engagement for the theater and Free Shakespeare in the Park.

Katrina Do (16BA) is an associate attorney at Whitfield & Eddy Law in Des Moines, where she focuses on business, banking, real estate, and commercial litigation.

Zachary Luppen (18BS) is an EEE components engineer at SpaceX in Hawthorne, California, where he performs risk assessment for launch vehicles and spacecraft.

Christine Manwiller (18MFA), who has completed her third year in the Buffalo State Art Conservation Program with a year at the Folger Shakespeare Library Conservation Lab, is an associate conservator at the Museum of the Bible in Washington, D.C.

Denise Martinez (11R), interim associate vice president for health parity with University of Iowa Health Care, has been named the Dr. Phil DeChavez Mentor of the Year by the Latino Medical Student Association.

Rachael Irlbeck Neff (14BA) has been named a shareholder at Smith, Mills & Schrock Law in Cedar Rapids, where she specializes in workers’ compensation, civil defense, and family law.

Rebecca Rukeyser (12MFA), an Iowa Writers’ Workshop graduate, is author of The Seaplane on Final Approach, her debut novel published this June by Doubleday.

Joel Sharbrough (16PhD), an assistant professor of evolutionary biology at New Mexico Tech in Socorro, New Mexico, has received a CAREER Award grant from the National Science Foundation to pursue his work in plant genomics.

Farah Towfic (11PHR), director of CEO operations at U.S. Pharmacopeia in Rockville, Maryland, and chair of the UI College of Pharmacy’s Genesis Board, has received the 2022 Women Making History Award, which recognizes outstanding contributions by women in Montgomery County, Maryland.

Winnie Uluocha (19MHA, 19JD), an associate with the Goodwin law firm in Washington, D.C., has been elected to the board of directors of the Iowa Law School Foundation.

Janet Weaver (19PhD) is the new curator of the Iowa Women’s Archives at UI Libraries. 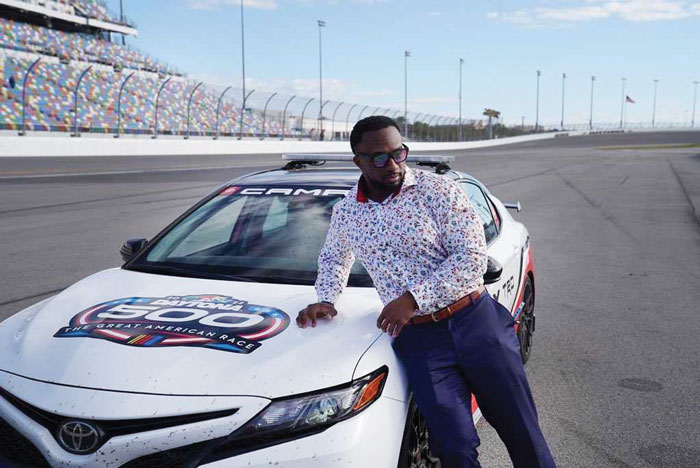 Ettore Ewen (08BA), or “Big E” to WWE fans, served as the honorary pace car driver for the 64th Daytona 500 NASCAR race this past February, leading the 40 competing cars to the starting flag. Known for his big personality in the wrestling ring, Ewen has earned titles like WWE World Champion, Intercontinental Champion, and United States Champion throughout his career. But Ewen wasn’t always a wrestler; as a student at the University of Iowa, he played on the football team. A series of injuries eventually forced him to switch to competitive powerlifting before settling into wrestling after graduation.

Ewen’s accomplishments don’t end with his athletic victories. He uses his platform to promote awareness of Black history, including through the development of Our Heroes Rock!, an animated TV series that aims to teach kids about Black history and leading figures using hip-hop music. Ewen, who is currently recovering from a neck injury suffered during a match this past March, also supports programs for children like the Boys and Girls Club of America and WWE’s anti-bullying program, Be a STAR.

Tina Freese Decker (02MHA, 02MS), president and CEO of the BHSH System, has been named one of Modern Healthcare’s 2022 Top 25 Women Leaders for her work with the nonprofit health organization in Michigan.

John Eggum (05BA, 05BBA, 08JD) is a shareholder at Foran Glennon law firm in Chicago who focuses his practice on insurance coverage, bad faith litigation, and other commercial disputes.

Vince Ellison (09MBA) is chief operating officer at Benchmark, a consulting firm for industrial and commercial roofing and pavement.

Benjamin Hassman (02BA, 08MA, 11PhD), an associate professor in the UI rhetoric department, has earned the Robert D. Ray Service Award for outstanding contributions to the Iowa Sister States organization, which aims to connect Iowans to the international community.

Ryan Hesseltine (02BSE), who earned a Master of Science degree from Stevens Institute of Technology this past winter, is a principal systems engineer in navigation and sensor systems at BAE Systems in Cedar Rapids.

Hana Hinkle (06BA, 09MPH), interim director and department head of the University of Illinois College of Medicine Rockford’s National Center for Rural Health Professions, has been selected as a 2022 Presidential Leadership Scholar.

Nathan Johnson (05JD), a former prosecutor, was named Volunteer of the Year by the Minnesota Sheriff ’s Association for his program FreeWriters, in which he teaches free writing to inmates at Hennepin County Prison.

Katherine Massoth (09MA, 16PhD), an assistant professor of history at the University of New Mexico, is author of Keeping House, a book that examines the historical cultural identities of women in New Mexico.

Allison Page (06BA) is author of Media and the Affective Life of Slavery, a book that examines how media shapes feelings and actions about race.

Keith Joseph Adkins (95MFA) is writer and executive producer of The Other Hamilton, an HBO Max drama series in development about one of the first Black millionaires.

Kathleen Andersen (91MS), an associate in the UI anatomy and cell biology department, recently earned the 2022 President and Provost Award for Teaching Excellence.

Donna D’Alessandro (95F), professor of pediatrics at the UI Roy J. and Lucille A. Carver College of Medicine, has earned the 2022 President and Provost Award for Teaching Excellence.

Rick Gates (95BSPh), senior vice president of pharmacy and health care at Walgreens in Deerfield, Illinois, has been named Pharmacy Executive of the Year by the publication Chain Drug Review for his work expanding the health care roles of community pharmacists.

Deniz Anilanmert Johnson (93MBA), chief operating officer of Stratyfy, an AI company in New York, was named an Inspiring Fintech Leader of 2021 by the NYC Fintech Women organization, which recognizes women at the forefront of financial technology who are advocates for gender equality.

Valerie Keffala (96PhD), a UI clinical assistant professor and licensed psychologist, has earned board certification in clinical health psychology from the American Board of Professional Psychology and has been inducted as a fellow of the American Academy of Clinical Health Psychology.

Sabrina Madison-Cannon (98MFA) is the Phyllis and Andrew Berwick Dean and Professor of Dance in the School of Music and Dance at the University of Oregon in Eugene. 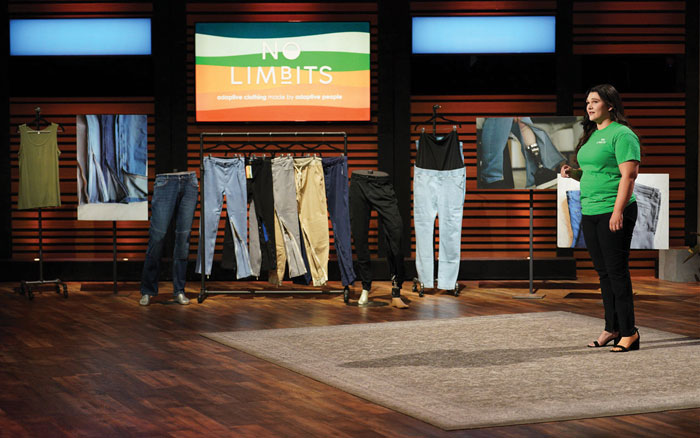 University of Iowa alumna Erica Cole’s April appearance on the TV show Shark Tank drew unprecedented attention to the young entrepreneur’s business. Her pitch convinced two “sharks,” Mark Cuban and Emma Grede, to invest a total of $100,000 in her company, No Limbits. The company, which Cole (19BA) founded as a student at Iowa with support from the John Pappajohn Entrepreneurial Center, features an adaptive clothing line designed to increase comfort for those with a disability, and is inspired by Cole’s own experience living with a prosthetic leg following a car accident. “There are very few moments you can point to and say my life changed then,” says Cole about the business deal, “but this is absolutely going to be one of them.”

Kathy Lang Diemer (89BBA) is owner and operator of Johnny B. Good’s Diner in Steamboat Springs, Colorado, which was recognized by Colorado Gov. Jared Polis for its innovation during the COVID-19 pandemic to keep customers safe and contribute to the Colorado economy.

Cathann Arceneaux Kress (86MA, 90PhD), vice president for agricultural administration and dean of the College of Food, Agriculture, and Environmental Sciences at Ohio State University in Columbus, Ohio, is board chair for the W.K. Kellogg Foundation, which aims to create better conditions for vulnerable children to succeed in school.

Mary Ann Doane (76MA, 79PhD) is author of Bigger Than Life: The Close-Up and Scale in the Cinema, which examines the use of scale across filmmaking technologies and styles.

Steve Gerkin (74DDS), a retired dentist, graduated with a Master of Fine Arts in Creative Writing degree this past winter from Lesley University in Cambridge, Massachusetts.

Gerald Patton (78PhD), a retired education administrator, has been named to the Kentucky State University Board of Regents.

Carla Nesbitt Perry (70BA), a writer and founder of Writers on the Edge, Nye Beach Writers’ Series, and two literary journals based in Newport, Oregon, received the Soapstone Bread and Roses Award, which recognizes a woman whose work sustains the writing community.

James Ponto (77BSPh), a clinical professor emeritus at the UI College of Pharmacy, has received the 2022 Warren E. Weaver/Richard P. Penna Award from the Board of Pharmacy Specialties for his work promoting pharmacist certification.

Carroll Reasoner (73BA, 76JD) has retired after 13 years as the UI vice president for legal affairs and general counsel.

Lawrence Tabak (74BA, 77MA), a journalist in Madison, Wisconsin, is author of Foxconned: Imaginary Jobs, Bulldozed Homes, and the Sacking of Local Government, his third commercially released book and an exposé on U.S. economic development, which was published by the University of Chicago Press and releases in paperback this November.

Michael Wellman (76BGS), a writer in Des Moines and two-time finalist in the Next Generation Indie Book Awards, is author of a new book titled A Scavenger’s Digest, published by Amazon Books.

Frederick Tillis (52MA, 63PhD), the late director of the University of Massachusetts Fine Arts Center in Amherst, was honored in 2021 with the rededication of the campus’s main concert hall in his name.

Samuel Burer, a professor of business analytics at the Henry B. Tippie College of Business, recently received the 2022 UI President and Provost Award forTeaching Excellence.

Susan Lutgendorf, a UI psychology professor, was named an American Association for the Advancement of Science Fellow.

Colleen Mitchell, associate professor of mathematics in the UI College of Liberal Arts and Sciences, recently received the 2022 President and Provost Award for Teaching Excellence.