By Katie Linder
University of Iowa College of Liberal Arts and Sciences Professor Deborah Whaley, an expert on race and gender in graphic novels and comics, explains why the genre can be an inviting medium for complex conversations. 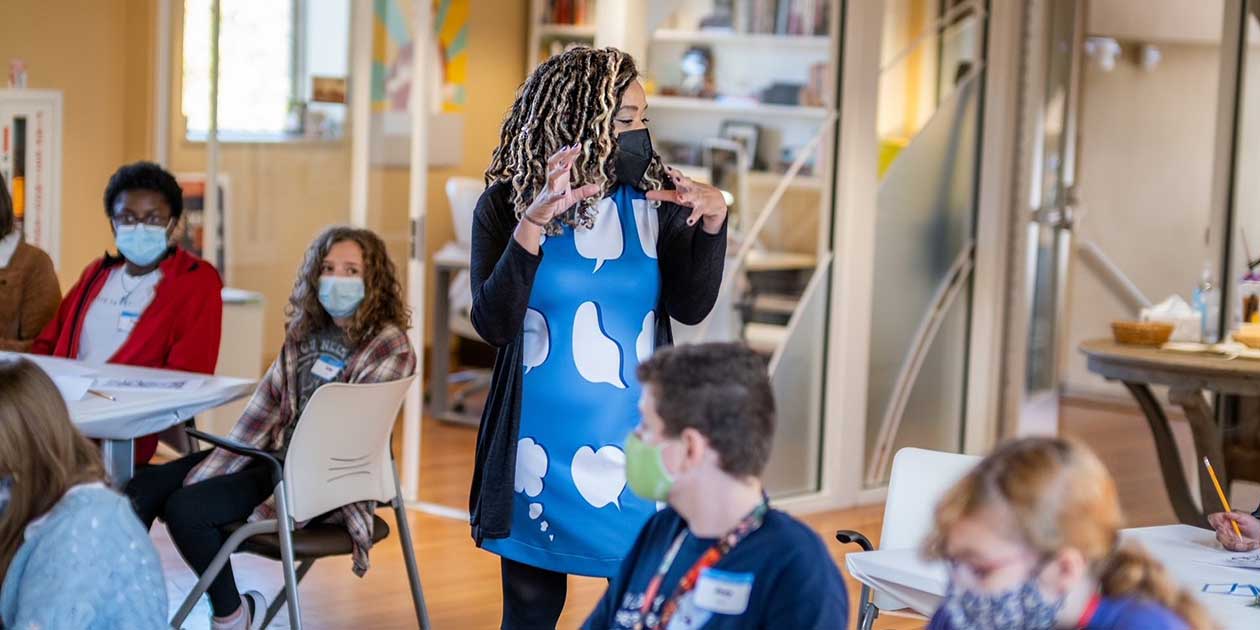 PHOTO: Deborah Elizabeth Whaley Deborah Whaley hosts workshops for youth and adults where she explains how to write and draw comics. This past September, she worked with junior high students at the Cassandra Voss Center at St. Norbert College in De Pere, Wisonsin.

Comics can be a tool to help facilitate crucial conversations about race, gender, and other sensitive topics.

That's feedback Deborah Elizabeth Whaley, professor of English literature and African American Studies at the University of Iowa, has received directly from her students—and she agrees. 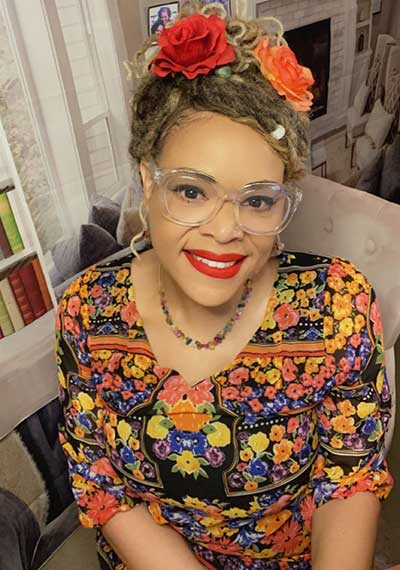 PHOTO: Deborah Elizabeth Whaley Deborah Whaley is a professor of English literature and African American Studies and an expert on race and gender in graphic novels and comics.

"Sometimes people think pop culture classes are just for fun, but these courses can address controversial issues in a way that reaches people where they are to advance diversity, equity, and inclusion," says Whaley, who also draws cartoons and paints.

Comics have become an area of scholarly success for the professor. In 2015, she published her book Black Women in Sequence: Re-Inking Comics, Graphic Novels, and Anime. Since then, she co-edited the book Keywords in Comic Studies and was featured on the official Marvel podcast to talk about women in comics. In 2021, she spoke on a virtual panel about diversity in comics during the mega convention Comic-Con.

During that discussion, Whaley addressed inclusion and visibility as a scholar and as an artist. She says the comic genre was once thought of as a white, male-dominated area. But now, more diverse writers and artists are entering the comic scene and finding success.

This change matters because representation matters, she says.

"With superhero comics, for example, one can make the argument that being able to see your culture in heroic positions can help build self-esteem," explains Whaley. "People of all cultures benefit from seeing people of African descent in a variety of roles."

Beyond the academic, Whaley's passion for comics is personal. As a child, she frequently drew characters from the funnies section of her parents' newspapers or from her siblings' comic book collections. She remains a fan of Marvel films and comic-based TV shows. 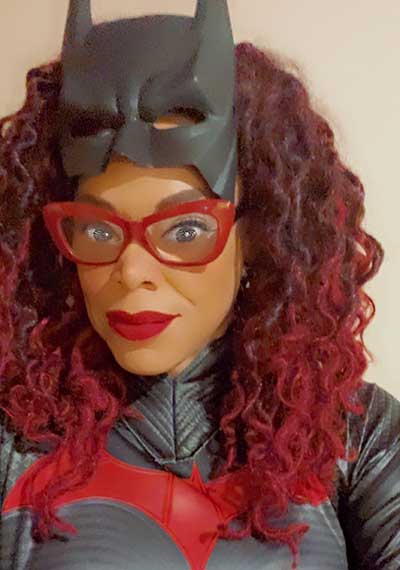 PHOTO: Deborah Elizabeth Whaley Deborah Whaley will dress in cosplay and pose for photos with comic books fans at conventions. In this photo she is dressed as Batwoman.

"A highlight of my year is when the Marvel films come out," she says, laughing.

Whaley also hosts workshops on creating and teaching comics and poses for photos with comic book fans at conventions, dressed as beloved superhero characters like Batwoman, Catwoman, and Storm.

Whaley has taught the popular elective course Black Image in Comics, Graphic Novels, and Anime, which made College Magazine's top ten course listing a few years ago. She previously planned a campus Black superhero week that included a student showing of the blockbuster movie Black Panther and a panel with real-life Black "heroes" who discussed their work to improve social justice in the community.

Whaley received questions about why she was doing so much for a simple movie release. She says she returned to the lesson her students taught her about the power of pop culture and representation.

Join our email list
Get the latest news and information for alumni, fans, and friends of the University of Iowa.
Sign up now
Related Articles
UI Latino Native American Cultural Center Helps Students Find Their Voice
Alumni shared their stories at the center's 50th anniversary celebration earlier this spring.
Nonfiction Essay: Dressed Up
An ocean away from family during the pandemic, a University of Iowa adjunct professor of creative writing thinks of her Nigerian father and his impeccable fashion sense.
Who's Watching From Social Media's Shadows?
During an Iowa Law panel, experts discuss the challenges of retaining privacy in the digital age.
Hawkeyes Answer the Call to Service in the Peace Corps
Iowa graduate Maurice Albertson helped create the humanitarian organization.