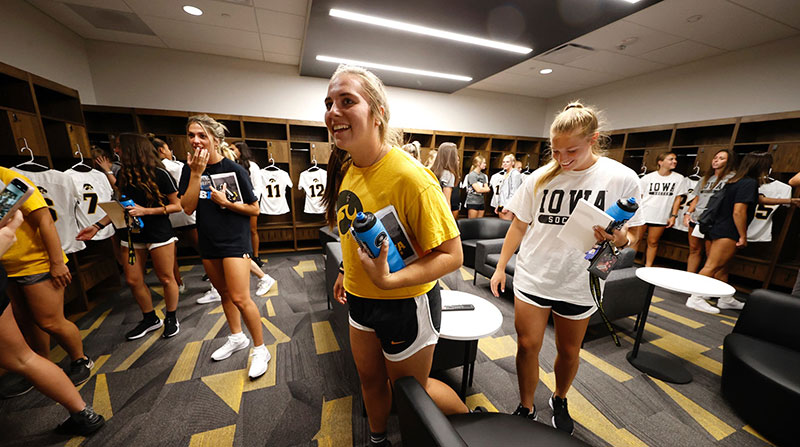 When Dave DiIanni took the reins of the Iowa soccer program in 2014, he had a vision for the future.

"It was my dream to have a facility next to our beautiful field," says DiIanni. "I wanted a home for our student-athletes' one location for everything they need."

In August 2021, DiIanni's dream came true with the recently completed $4 million operations facility located on the west side of the Iowa Soccer Complex, which includes locker rooms, a game-day suite, athletic training room, and coaches' suite. The facility has been funded by a $3 million anonymous gift, donations from fans and friends, and an ongoing $150,000 crowdfunding campaign to name the home locker room in honor of Kim Olsen White (10BA)—a former soccer student-athlete who died last year after a long battle with cancer.

As Iowa soccer enters its 25th season this fall, DiIanni believes there's never been a better time for the program. The Hawkeyes are coming off back-to-back NCAA Tournament appearances and are currently the reigning Big Ten Tournament champions. The Hawkeyes return all but one starter from last year, and DiIanni will look to five student-athletes—Samantha Cary, Josie Durr, Rielee Fetty, Hailey Rydberg, and Sara Wheaton—to lead the Hawkeyes on the pitch.

"Our student-athletes continue to raise the bar in terms of what we strive for each year," says DiIanni, "but our goals are always to produce better students, people, and athletes."

Iowa soccer has had some tremendous talent over the past 25 years. Head Coach Dave DiIanni gave us his five most influential Iowa soccer players from the program's history.

Iowa soccer has had some tremendous talent over the past 25 years. Head Coach Dave DiIanni gave us his five most influential Iowa soccer players from the program's history.

Join our email list
Get the latest news and information for alumni, fans, and friends of the University of Iowa.
Sign up now
Related Articles
How Christine Grant Changed the Game
On the 50th anniversary of Title IX, the University of Iowa celebrates the legacy of the athletics administrator who helped level the playing field nationally and sparked a women's sports revolution.
Iowa Student-Athletes Use NIL Deals to Give Back
Meet 11 Hawkeyes who have dedicated their platforms to supporting UI Stead Family Children's Hospital and other causes.
Watch Student Manager Jack Devlin Sink Iowa's Shot of the Year
The Hawkeyes' most memorable long ball of the basketball season came during a timeout on Senior Night.
Iowa Celebrates 50th Anniversary of College World Series Team
Former Major League Baseball player Jim Sundberg reflects on the 1972 Hawkeye squad.