Hawkeyes Answer the Call to Service in the Peace Corps 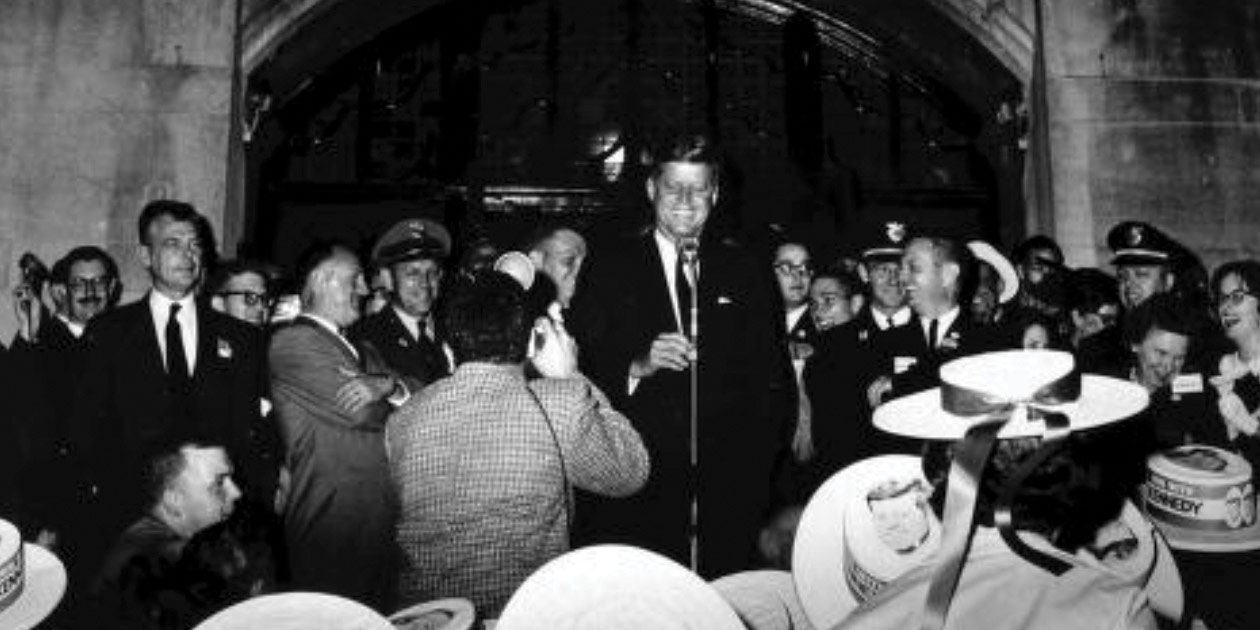 PHOTO COURTESY BENTLEY HISTORIC LIBRARY On Oct. 14, 1960, Sen. John F. Kennedy gave a 2 a.m. speech to college students at the University of Michigan that would help launch the Peace Corps.

Sixty years ago this spring, President John F. Kennedy signed Executive Order No. 10924, which officially launched the Peace Corps as part of the U.S. Department of State.

From the start, many Hawkeyes have embraced the mission of this international humanitarian service organization. More than 744 University of Iowa alumni volunteers have served abroad through the Peace Corps—including 27 active before COVID-19 disrupted the program. In 2015, Iowa City ranked No. 7 among metropolitan areas with the highest number of Peace Corps volunteers per 100,000 residents.

"Despite its size and geographic isolation, Iowa City is engaged with—and aware of—the rest of the world," former Iowa City mayor Matt Hayek, who served in the Peace Corps in Bolivia from 1992 to 1994, said at the time of the recognition. "Combine that with a high rate of volunteerism, and the result is a natural interest in service opportunities like the Peace Corps."

Kennedy first touted the idea of the Peace Corps in October 1960 during his campaign for president. R. Sargent Shriver was named its first director after the order was signed on March 1, 1961.

Not everyone embraced the proposal. U.S. Rep. H.R. Gross of Iowa ridiculed the concept a few days after it was unveiled. "A haven for draft-dodgers," he said. "Congress is likely to see more strange maneuvers as the new frontier is extended to Timbuktu."

Gross' remarks did not deter 150 people from attending a presentation about the new Peace Corps a few weeks later in the Main Lounge of the Iowa Memorial Union. Attendees listened to Maurice Albertson (42MS, 48PhD)—a College of Engineering graduate who played a central role in the creation of the Peace Corps—as he described criteria that the program would expect from its volunteers.

"Volunteers should be selected by their belief in their mission. A poll has indicated two motives should be present—a humanitarian desire to serve others and a pioneering spirit of adventure," said Albertson, according to a Daily Iowan account of his speech.

The evening presentation was a homecoming for Albertson, who obtained advanced degrees in hydraulic engineering at Iowa. Albertson at the time was director of the Colorado State University Research Foundation, and in 1960 headed the feasibility study endorsing the Peace Corps.

While open to applicants of all ages, the Peace Corps from the beginning appealed especially to young adults. At most campuses, a local liaison officer fielded inquiries about the program and recruited applicants. Marion Huit (49MA), dean of students, became the first to fulfill that duty at the State University of Iowa. Huit coordinated meetings with student leaders during the program's formative years, informing them of its upcoming application deadlines and updating them on evolving vocational and geographic opportunities. Athletic Director Forest "Evy" Evashevski also served the Peace Corps early on as a physical training consultant.

Although more than 6,000 Americans serving in more than 60 countries for the organization returned home in March 2020 due to the pandemic, the Peace Corps is now recruiting and planning for a return to service—offering volunteers an opportunity to be the start of a new chapter. Acting Peace Corps director Carol Spahn says, "As we look to the next 60 years, I know the Peace Corps will continue to be a community of people—all over the world—willing to do the hard work of promoting peace and friendship."

For more on the Peace Corps, visit peacecorps.gov.

Did you serve in the Peace Corps? Please share your story with us at uimagazine@foriowa.org.

Join our email list
Get the latest news and information for alumni, fans, and friends of the University of Iowa.
Sign up now
Related Articles
UI Latino Native American Cultural Center Helps Students Find Their Voice
Alumni shared their stories at the center's 50th anniversary celebration earlier this spring.
Nonfiction Essay: Dressed Up
An ocean away from family during the pandemic, a University of Iowa adjunct professor of creative writing thinks of her Nigerian father and his impeccable fashion sense.
Who's Watching From Social Media's Shadows?
During an Iowa Law panel, experts discuss the challenges of retaining privacy in the digital age.
Can Comics Stimulate Conversations on Social Change?
University of Iowa College of Liberal Arts and Sciences Professor Deborah Whaley, an expert on race and gender in graphic novels and comics, explains why the genre can be an inviting medium for complex conversations.