A Pro for the People

By Ben Frotscher
Former UI golfer Kelley Brooke shares what it's like to be head professional at the site of the upcoming PGA Championship.

Kelley Brooke's time as a UI student-athlete prepared her to lead one of the top public golf courses in the nation.

At Iowa, Brooke became a four-year MVP from 1986 to 1990 and an All-Big Ten Conference selection for the Hawkeyes golf team during her senior season. "Iowa's program was cutting edge," says Brooke, who grew up in Bettendorf, Iowa. "We were working with a trainer before it was fashionable to do so. Because of that, my physical fitness—and my golf game—improved." 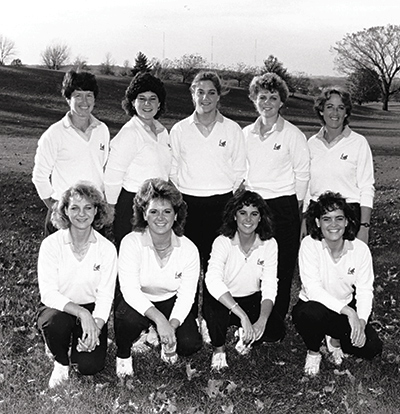 PHOTO COURTESY DIANE THOMASON Kelley Brooke as part of the UI golf team in the late 1980s ( second from left in first row).

Now one of the top women in a male-dominated profession, she credits her coach, Diane Thomason—who led the Hawkeyes for 27 years—for instilling in her a love for coaching and teaching.

"Diane was an extraordinary mentor, and she changed my life," says Brooke, who learned to golf from both her parents and grandparents. "Iowa gave me the foundation to be the coach and teacher that I am today."

After one year on the mini tours, Brooke began a golf instruction career—first in New Jersey and later in New York—in which she has given more than 40,000 lessons. On Jan. 1, 2018, she began management of Long Island's Bethpage State Park Golf Courses, known in the area as "the people's country club."

Brooke is head golf professional at Bethpage, overseeing five challenging 18-hole layouts, a 285-cart operation, and a 7,000-square-foot pro shop that accumulates more than $2 million in yearly merchandise sales. A frequent content contributor for the Golf and Travel channels, she also leads a team of six Bethpage golf professionals who provide lessons and instruction to golfers of all ages and abilities.

The crown jewel at Bethpage is the Black Course, the No. 8 ranked public course in the U.S. by Golf Digest and site of the 101st PGA Championship, which will be held May 16–19. While the entire Bethpage facility will close for three weeks prior to one of golf 's four majors, Brooke will remain engrossed in running a top-notch facility and growing the game of golf.

"Hosting the PGA Championship is incredibly exciting for us," says Brooke. "I just hope the weather cooperates."

A DAY IN THE LIFE OF A PGA PROFESSIONAL

Brooke commutes an hour on the freeway from her Rockaway Beach neighborhood to Bethpage.

The first of several private lessons Brooke teaches each day begins. She helps golfers work not only on swing techniques, but also on the mental aspect of the game—something she learned at Iowa.

With the PGA Championship just two months away, Brooke—the voice of Bethpage—does a quick interview with a local radio station.

Brooke finds time to hit the links before dusk. Although she works long hours during the golf season, Brooke says her game has never been better and recently placed eighth in the 2018 LPGA Teaching and Club Pro National Championship.

As dusk approaches, Brooke works with her staff to get all 285 carts back into storage for the night before heading home.

Join our email list
Get the latest news and information for alumni, fans, and friends of the University of Iowa.
Sign up now
Related Articles
How Will a Supreme Court Ruling Affect Student-Athlete Compensation?
An Iowa associate professor of law offers insight into what the NCAA vs. Alston case could mean for the future of college athletics.
Iowa Soccer Operations Facility Opens
The Hawkeye Big Ten Tournament championship team celebrates the program's 25th year this fall with a new home.
Celebrating Duke Slater: Iowa Honors Pioneering Football Player
The UI names the field at Kinnick Stadium after Iowa's first Black All-American, a century after he led the Hawkeyes to an unbeaten season.
Former Cyclone Becomes Hawkeye to Honor Her Late Father
In memory of her dad who died of COVID-19, Iowa soccer player Courtney Powell starts a hospital fund to help families with loved ones in the ICU.
Advertisement