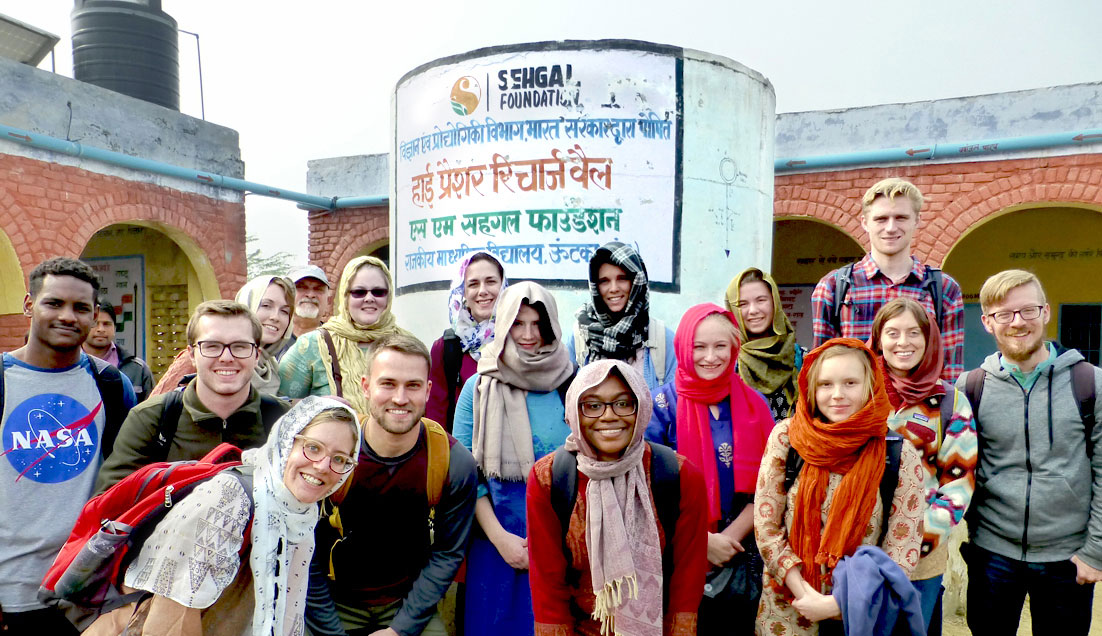 David Braun squeezed into a densely packed subway car and noticed a few classmates struggling to board. More than 7,500 miles away from home, Braun feared his group might get separated during rush hour in one of the world's largest cities. Instead, a few passengers held open the doors and made room for his peers. Aboard the busiest metro system in Delhi, India—where the country's overpopulation crisis was on full display—Braun encountered the unexpected: kindness from strangers.

"I don't think it's until you see things with your own eyes that you actually understand how bad the [overpopulation] problem is, but people in India are very generous and compassionate," says Braun, a UI civil engineering senior who studied water poverty in rural India last year as part of the university's India Winterim program.

Such meaningful hands-on experiences are the goal of the three-week expedition, which gives Hawkeyes the opportunity to learn within India's diverse cultures. Since 2006, more than 1,300 students have participated in the India Winterim, which received the Institute of International Education's 2016 Andrew Heiskell Award for Innovation in International Education. This winter, 51 students depart Dec. 26 to work alongside public and private nongovernmental organizations across India in one of four disciplines (see "India Unveiled").

New this year, the India Winterim water poverty course led by engineering professors Marian Muste (93MS, 95PhD) and Allen Bradley will expand its reach thanks to a two-year, $100,000 grant through the United States-India Educational Foundation. The grant allows for three UI students to travel in the next two years to India and collaborate with students from the Indian Institute of Technology Roorkee. Additionally, it pays for two other UI students and associate engineering professor Craig Just (01PhD) to research in India during monsoon season from July to September.

India Winterim founder and UI professor emeritus Raj Rajagopal established the water poverty course in 2011, and Muste has since led students back to the Nuh district of Haryana, India, to build upon past progress. The students partner with the Sehgal Foundation—an Indian nonprofit organization—to analyze water quality in private wells and evaluate the effectiveness of rainwater collection tanks and check dams.

Though UI groups traveled to India prior to that partnership, Jay Sehgal (86BBA)—executive vice president and a trustee for the Sehgal Foundation—helped focus the course, recruit students, mobilize resources, and provide new hands-on learning opportunities abroad. For his efforts, Sehgal accepted the university's 2018 International Impact Award in downtown Iowa City last month. "My hope is this gives students opportunities to open their minds and to understand world issues and the difficulties the world faces," he says. "I hope it is a life-changing experience."

Past travelers say the program has indeed expanded their perspective on the world. Says Amina Grant, a graduate research assistant in the College of Engineering who participated in last year's trip: "There's never one way to solve a problem. It's important to remember there are other views, especially when working with people who have had different experiences."

While most Hawkeyes return home for winter break, 51 UI students will travel halfway around the world this December for a three-week India Winterim course offered through International Programs. The 2018–19 sections include:

While most Hawkeyes return home for winter break, 51 UI students will travel halfway around the world this December for a three-week India Winterim course offered through International Programs. The 2018–19 sections include:

Join our email list
Get the latest news and information for alumni, fans, and friends of the University of Iowa.
Sign up now
Related Articles
UI Latino Native American Cultural Center Helps Students Find Their Voice
Alumni shared their stories at the center's 50th anniversary celebration earlier this spring.
Nonfiction Essay: Dressed Up
An ocean away from family during the pandemic, a University of Iowa adjunct professor of creative writing thinks of her Nigerian father and his impeccable fashion sense.
Who's Watching From Social Media's Shadows?
During an Iowa Law panel, experts discuss the challenges of retaining privacy in the digital age.
Hawkeyes Answer the Call to Service in the Peace Corps
Iowa graduate Maurice Albertson helped create the humanitarian organization.