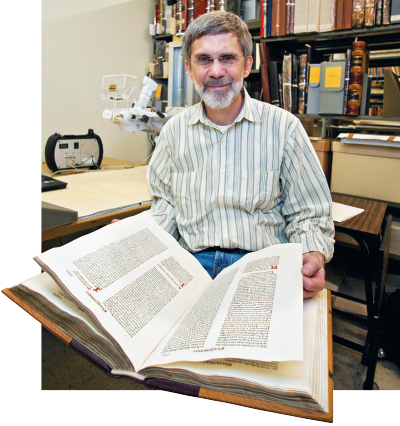 PHOTO COURTESY MACARTHUR FOUNDATION Papermaker Timothy Barrett revealed the Iowa story behind the Constitution at a university outreach event this past November in Washington, D.C.

Behind glass, in the rotunda of the National Archives in Washington, D.C., sits a centuries-old symbol of American history. The United States Constitution is one of the three original Charters of Freedom on display in the archives, and on the first page of this treasured document—seven inches down from "We the People," on the left-hand side—peeks the edge of some special paper with a UI connection.

Timothy Barrett, a distinguished papermaker and director of the UI Center for the Book, recently shared this Iowa paper story with a group of UI alumni and friends during a November university outreach event in the nation's capital. He explained how he and his UI colleagues answered the National Archives' call for help in 1999, when it commissioned them to create the paper on which would lie the fragile parchment originals of the U.S. Constitution, the Bill of Rights, and the Declaration of Independence.

"Our formula for making the paper yielded a very stable product that will last for millennia," says Barrett, who also led two tours of the Charters of Freedom documents during the D.C. event. "We don't actually have to go to the rotunda to feel an ongoing sense of pride. Just knowing it's there is rewarding, and I think everyone in Iowa can rightly share in that feeling."

That sense of Iowa pride permeated the entire outreach event, which included a presidential reception and a Hawkeye Caucus for policymakers to learn about some of the UI's exceptional people and programs. Dawn Bowlus, 09MBA, director of the UI Jacobson Institute for Youth Entrepreneurship, was one of the university presenters on hand. "It was a thrill to be involved in the caucus," she says. "It's such a great opportunity to showcase, for legislators and alumni, the important work we're doing at Iowa."

This work includes pioneering research in neuroscience, and outreach attendees heard—during a social hour featuring Ted Abel, director of the Iowa Neuroscience Institute—how Iowa is charting new frontiers in this field. The renowned institute explores the causes of, and preventions, treatments, and cures for, the many diseases that affect the brain and nervous system. It has positioned Iowa as a leading destination for brain and nervous-system research, education, and clinical care.

In addition to learning about the university's groundbreaking advances in health care—and cheering on the Hawkeyes against the Purdue Boilermakers during game watches at two different locations—D.C.-area alumni and friends also got the chance to hear about an Iowa masterpiece that had just arrived in their city. The National Gallery of Art unveiled Jackson Pollock's world-famous Mural on Nov. 19, and it will be on display in the capital for nearly a year. The painting will come back home in 2020, when the new UI Stanley Museum of Art building is complete.