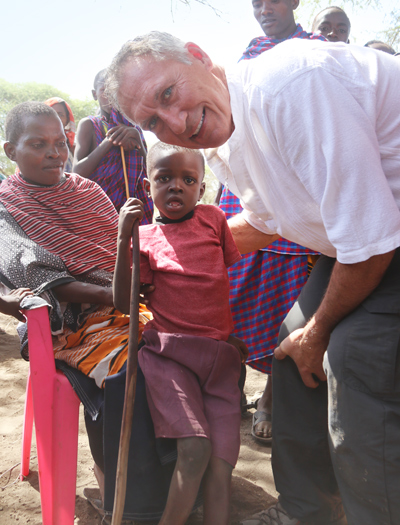 PHOTO COURTESY STEVE MEYER Physician Steve Meyer, who has been serving the people of Tanzania for more than 20 years as co-founder of the Siouxland Tanzania Educational Medical Ministries, recently helped provide access to medical care to survivors of a deadly bus crash.

It was a race against the clock.

“My wife told me that we needed to bring these kids back to Iowa so that they could receive the care they needed,” says Meyer, president and co-founder of the Sioux City-based ministry. “I didn’t think the Tanzanian government would let the children out of the country, but we had to give it a shot.”

Working with the families, the U.S. State Department, the Tanzanian government, and Samaritan’s Purse—an international humanitarian aid organization that paid the students’ medical costs and travel expenses—Meyer helped the teenagers, and their mothers, travel from Tanzania to Sioux City. Meyer, an orthopedic surgeon in the area, had arranged for Mercy Medical Center in Sioux City to provide their medical care.

After hours in surgery to treat their fractures and three months of recovery, the teenagers returned to Tanzania with Meyer in August. For Meyer, who has made 44 mission trips to Tanzania, this was just the latest chapter in STEMM’s efforts to help the everyday lives of children in this poverty-stricken nation.

“It was triumph out of tragedy,” says Meyer. “Coming from one of the poorest third-world countries, these kids were the ultimate underdogs, and they were rescued, restored, and returned to their homes. This whole experience just goes to show you that when people come together, anything is possible.”

When Meyer helped co-found STEMM more than 20 years ago, he could not have anticipated the impact this mission would make in Tanzania. At that time, Meyer was struggling with some of life’s biggest problems: depression and marital turmoil.

But, during an overnight shift at Mercy Medical Center in Sioux City, an interaction with a patient changed the course of his life. The patient encouraged him to go on an eye-opening mission trip to China. “At that point in my life, I was lost,” says Meyer. “I just said, ‘Screw it, let’s do this.’”

Nine months later, Meyer led his own mission trip to Africa, and the idea for STEMM (stemm.org) was born.

Twice a year, Meyer leads a group of volunteers to Tanzania to focus on educational and medical efforts. STEMM volunteers have performed more than 1,000 surgical procedures in a country with only one physician for every 100,000 people, and Meyer performed the first hip and knee replacement in the entire country. Fundraising efforts also have helped send more than 10,000 children to high school and college.