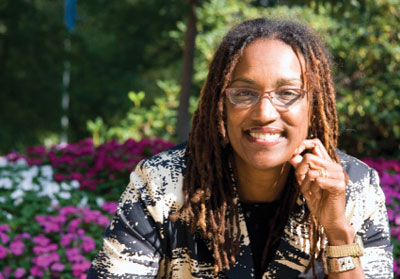 Kesho Scott is a member of the UI Alumni Association's Old Capitol Club.

Kesho Scott first encountered prejudice and the pain of racism as an eight-year-old African-American girl in Detroit, when she and 16 black classmates boarded the bus to attend a predominantly white school.

"Some white parents attacked and shook the bus, and it scared the hell out of us," says Scott, 88PhD. "It taught me there must be something valuable about education. I dedicated myself to fighting their ignorance."

Now as an associate American Studies and sociology professor at Grinnell College—the first tenured African-American woman in the school's history—Scott shares her message of equality and social justice worldwide. Just this past summer, she spoke at the first International Women's Studies and Gender Studies conference in China. Around 400 teachers, scholars, and Chinese female role models attended the event to discuss global issues from a feminist perspective.

The conference marked a historic moment for China, as the Communist country has just begun to allow women's groups and grassroots movements to organize; to encourage female involvement in professions such as business, science, and technology; and to form gender studies departments to help raise awareness of equality and social justice issues.

At the conference, Scott offered practical suggestions to Chinese educators on curriculum development and student activism. She shared her trademark idea of "guerilla teaching"—which unites theory and practice in the classroom through service learning. "Many of the Chinese scholars had never met a black woman before," says Scott. "We connected to define and address issues related to our identities as women of color."

A diversity trainer and gender consultant, Scott has also toured the world to conduct workshops she calls "Unlearning Racism," where people have a safe place to talk about race and racism in hopes of challenging cross-cultural and multicultural ignorance.

In recognition of her accomplishments, Scott earned the Iowa Commission on the Status of Women's 2008 Cristine Wilson Medal for Equality and Justice. The mother of four has also reached many other milestones in her career—including an American Book Award, an appearance on the Oprah Winfrey Show, and a board position on the Fort Des Moines Memorial Museum and Educational Center, which focuses on the role of African-Americans and women in the military in Iowa and in America.

Scott continues to move forward with research on sexual harassment across cultures, a study on the Namibian queer movement, a book on the lives of women worldwide called Lemongrass Stories, and a memoir titled Twenty Years of Unlearning Racism. "People may say that discrimination is human nature," says Scott, "but I have a vision of an '-ism free' world that I will never give up."