View All From You
Share
IOWA Alumni Magazine | October 2009
Playing with Fire: Mary Lata
By Shelbi Thomas
With the tilt of a drip torch, Mary Lata ignites a prairie into flames. It's not what you'd expect from one of Smokey Bear's colleagues. 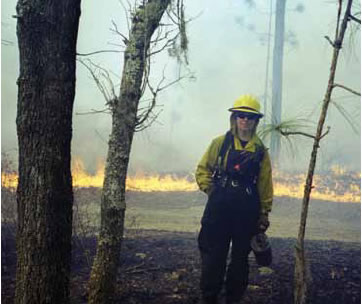 This self-described "grassland geek" does more than light a fire, she's helping control the burn of thousands of acres of prairie land across the Midwest.

With the tilt of a drip torch, Mary Lata ignites a prairie into flames. It's not what you'd expect from one of Smokey Bear's colleagues at the U.S. Forest Service, yet her actions are far from destructive.

Before the area became settled by people, wildfires used to regularly sweep through the Great Plains. Now, without the natural cycle of fire, highly flammable vegetation builds up to fuel hotter, faster, and more out-of-control blazes.

That's where Lata fits in. Monitoring an area that spans the Buffalo Gap, Fort Pierre, and Oglala National Grasslands and the McKelvie and Nebraska National Forests, she helps balance the need to protect human property with that of maintaining a healthy ecosystem. Lata and her colleagues consider the area's vegetation, the time of day and year, and any safety concerns before setting a controlled burn. After she and her crew create fire boundaries by mowing and watering down the grass surrounding the perimeter, they assume their positions, feel the exhilaration—and light a match.

To avoid the perils of being in the line of fire, Lata follows the "10 and 18," a list of safety instructions and "watch out" situations such as maintaining communication with crew members and monitoring wind direction. She says, "The greatest danger is posed by a lack of situational awareness at critical times—complacency because nothing [tragic] has happened."

The self-described "grassland geek" does more than just set fires. She also fights wild infernos, rehabilitates land devastated by burns, and teaches students and firefighters about a fire's behavior and effects. Lata serves on an expert team that is rewriting material for the National Interagency Fire Center's "Intro to Fire Effects" course, and she'll also lead a special session on grassland management for this fall's Association for Fire Ecology international congress.

As Lata blazes the way for up-and-coming fire ecologists, she remains concerned about the future of ecosystems that rarely see the benefits of fire. "There's a serious lack of understanding [about the importance of prescribed burns]," she says. "We're losing ground to encroachment."