View All From You
Share
IOWA Alumni Magazine | August 2009
A Profile of Hope
By Tina Owen
An African-American Iowan now living in New York, Lois Garland-Patterson, 69BSPh, 98PhD, takes pride and comfort in her Midwestern heritage. 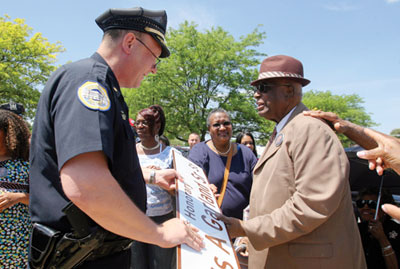 Lois Garland-Patterson (second from the right) watches proudly as her father, Louis Patterson, Jr., accepts a commemorative street sign from the Des Moines Police Department in honor of his father, one of the city's first African-American police officers.

A Profile of Hope Like many other Americans, my large, scattered family only manages to get together for rare occasions—usually a funeral. One day earlier this summer, though, we all gathered in Des Moines to commemorate an event that was much happier, although also extraordinary.

On a bright, sunny day, four generations of Garlands traveled from California, New York, and elsewhere to watch members of the Des Moines Police Department unveil a street sign in recognition of my grandfather, Louis Garland, Sr. One of the city's first African-American police officers, my grandfather patrolled Des Moines' African-American business district in the 1920s and '30s. The ceremony some 40 years after his death made me proud to be an Iowan—although I realize that an African- American Iowan is quite a rarity. After all, Iowa is one of the whitest states in the nation.

Growing up in Iowa in the segregated 1940s and '50s, though, I didn't experience the ugliness of racism. In Des Moines, we lived in the same neighborhood as my father's white IRS colleagues—although we were one of only two Negro (as we called ourselves back then) families.

I know that I led a charmed life, whereas my father had to battle every day for his rights and my maternal grandmother, a brilliant woman, could only find work cleaning houses. Fortunately, both sets of my grandparents instilled in their families a strong belief that the color of our skin wasn't an excuse or a crutch or a scarlet letter; it was simply what God gave us.

As a UI undergrad in the early 1960s, I discovered Iowa City to be a refreshing, diverse community that gave me nothing but fond memories, including meeting my husband, Cornelius [68BS, deceased], one of the black athletes on the Hawkeye football team.

When I returned to the UI in the late 1990s for my Ph.D. in pharmacy, though, I noticed a difference. One night, when I was driving downtown, a police officer pulled me over for a minor traffic infringement. Rude and brusque, he made me wait 20 minutes while he checked to see if I had a criminal record.

The next day, I felt that I—a 51-year-old professional African-American woman driving an SUV with vanity Hawkeye plates—had been profiled. I'd probably been pulled over because I was black.

What had happened in those 30 years? For a start, the UI now has many more black students from all socio-economic groups than it did in the 1960s, when the relatively small African-American population consisted mainly of athletes and scholarship students. Plus, despite the civil rights victories of my undergrad days, America still has covert problems with race. Spurred on by irresponsible media hype, many people stereotype and fear other racial and cultural groups.

Now that I live in Harlem, I find that I'm stereotyped not as an African-American but as a Midwesterner—kind, friendly, willing to give people the benefit of the doubt. So, yes, I have hope for the future. I'm an Iowan.

—As told to Tina Owen