There is no better day than April Fools' for a burn survivor to begin observing firefighters. I told myself that I was not hoping to witness what they referred to as "the worst day of somebody's life" and still I was disappointed when, by the end of my first shift in Iowa City, there had been no emergency calls—not even a false alarm. The Ride-Along Program sounded to me like an opportunity to confront PTSD and to prove to myself that the concept of bravery was more complicated than what my deathbed prayer groupies assumed in their get-well cards twelve years ago. (April 2005 is when I almost burned alive.)

My first ride on the ladder truck took me to the Highway 6 Hy-Vee, where I observed Will refer to his frozen fettuccini as "backup" for his first lunch purchase, which was, I recall, a piece of fruit, since he wasn't all that hungry. Later that afternoon, Josh and Sadie showed me every item in the storage cabins of Engine 11. Somewhere between the tarps and extra bottles of oxygen, my lower back indicated that I had been standing for too long, and it became clear that nothing they could show me would satisfy my curiosity. What I really wanted to know was why anybody would willingly enter an inferno, but instead I asked, "How much water can this truck hold?"

On Day 2, one of the firefighters who was going off to take a nap handed me the remote control for the TV in the lounge. I sat alone watching reruns of rodeo footage on a series called Special Cowboy Moments. One clip showed a bronc rider practically snap his neck on the rear end of a bucking horse. When Captain Zack entered the room, he said to me, "Maybe you're a white cloud." Apparently some riders, which I misheard as writers, are considered black clouds because they keep the firefighters busy.

At some point everyone assembled in the lounge and I asked about their definitions of bravery. Joe responded, "If you're waiting for me to be brave, then you're going to be waiting a long time. Because I'm scared. I'm just doing it." Paul said, "It's not about being afraid. Simply knowing there's something bigger that needs to be done makes it worth the risk." I don't remember which one described their job as "a lot of boredom ... punctuated by moments of terror," but it reminded me that there was still time for my cloud to darken.

Through a light mist, four of us rode to the abandoned building formerly known as the Pleasant Valley Flower Shoppe, where the firefighters had been flooding the floors and releasing theatrical smoke for their training. I stepped around toppled caution cones as I watched them practice forcible entry through every door on the first story. For this they used a flathead axe and a Halligan bar, otherwise known as "The Married Pair." They coordinated to the rhythm of the instruction: hit, hit, hit. With each strike the clanging metal vibrated my teeth. I pictured my mother unequipped and ramming her shoulder into the door that had trapped me and my sister so long ago. I might have felt grateful for my survival if I weren't so cold from the damp and the drafts sneaking in through the broken windows. 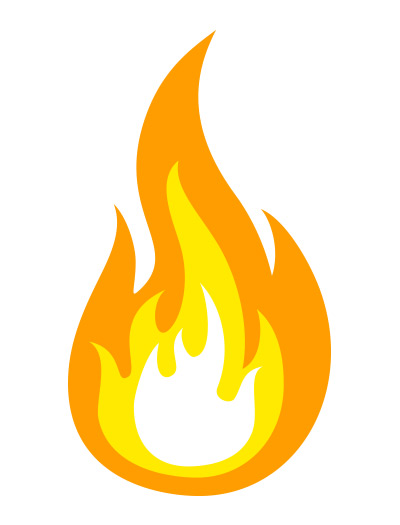 Something about the emptying dark of that space, the way that insulation dangled from exposed rafters, how remnants of flower pots lay scattered, and how we tiptoed around the loose rotting floorboards, reminded me of my first return home after the fire. It was eerie and I couldn't wait to leave. Outside the abandoned Flower Shoppe, Brock said he is always surprised to return to an emergency scene once the smoke has cleared. His mental map of the spaces he blindly navigates is never like reality.

The first call comes at 3:38 p.m. An approximately fifty-year-old male foaming at the mouth is somewhere near the corner of Market and Gilbert. We ride with the sirens on for a total of thirty seconds, and when we arrive I am tangled up in my headset wire. There's an empty bottle of vodka and an unwrapped sandwich on the sidewalk. A homeless man with a dog is sitting next to our medical subject, the latter of which is unresponsive but sitting upright and looking straight ahead. Many bodies from inside the Bluebird Diner stand and stare as the firefighters help this man to a stretcher that will take him ten feet to an ambulance. The whole scene lasts five minutes. Out of boredom, a cop asks the homeless man if he's going to eat that sandwich. Even the dog sighs and drops his head onto his paws. The homeless bystander turns his gaze from the ambulance toward me and says, "Hey Miss, do you think he's gonna be okay?" I had no way of knowing, but I nodded.

On my last day at the fire department, I had the choice of attending an event called "Love My Melon," which recognized traumatic brain injuries, or staying at the station for a six-year-old's birthday party. I went for the braver choice. The last time I explained my scars to a six-year-old, she shrieked and hid behind her mother's skirt.

The last of the thirteen kids to arrive was the blondest and also the tiniest. He cried when his father said goodbye, and the tour headed to the lounge with him lagging behind. I pegged him for the likeliest to fear me.

"How many of you have a living room?" Josh asked the low bobbling sea of heads.

"No," his friend interrupted. "He lives in a cardboard box!"

"How many of you have three refrigerators?" asked Josh.

"Guess why we have three?"

The children broke into singing their ABCs.

"Where's MY food?" said one child, opening a cupboard. I squeezed forward through the crowd, but nobody noticed me.

In the rec room, Josh explained that every firefighter works out for an hour each day. "You've got to be strong if you need to lift anyone out of a window. Some people do yoga in here. ..."

"I do yoga!" said one kid, who proceeded to do a split.

By the time Cameron the firefighter slid down the pole, the kids had reached a fever pitch. They raced across the garage and pulled themselves up onto the rescue boat. Helpless parents trailed behind, carrying the smaller ones. Josh turned on the red and blue truck lights, wowing the kids into a dense crowd at his hips. He pulled out a life jacket from the cabin and asked, "Does anyone know why we would need this?"

"In case of sharks!"

"I don't think you're gonna find any sharks in Iowa. Why do you think we have a fan?"

Here the tiny blonde, still in tears, got rocked by an adult standing in front of me. The boy rubbed his eyes and squinted at the flashing lights of the truck. A child who noticed him thought he was afraid. He jumped up and down, waving his hands in the boy's face. He shouted, "There's no monsters in the fire! No monsters!" I looked down at my shoes, sad but strangely satisfied.

The kids lined up on a yellow line while Cameron stepped into his seventy pounds of gear. "This is so we don't get burned," Josh said.

Cameron turned on his oxygen mask. It made a beeping noise that one kid thought sounded like a bird. He wildly flapped his arms and everyone giggled. This is when a brunette with a ponytail noticed my right hand. She was maybe five. She did a double- and then a triple-take at the site of one of my amputations. I tried to catch her eyes with a smile so as to reassure her that I was fine, but it was as if I only existed in that patch of air. She looked concerned as she stroked her index finger. As if she was dreaming, she pinched it. She curled it into a question mark.

Before the children left the station, they gathered for a photo in front of the truck. Instead of saying cheese, they said fire with the same mocking intonation of a practical joker. The brunette ignored the camera lens for my hands, and I had to laugh.

Fire was the last thing on her mind. 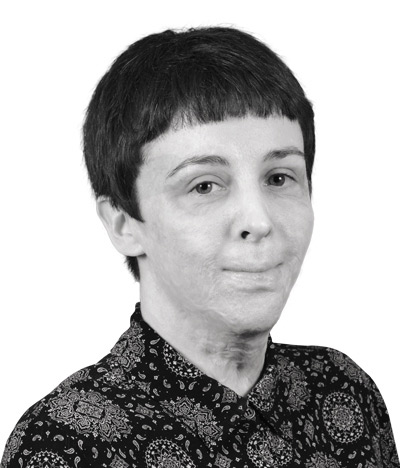 Dina Peone was 16 when she woke surrounded by flames in her Saugerties, New York, home. On the early morning of April 21, 2005, she escaped with burns spanning 58 percent of her body. She spent the rest of her 16th year in a medically induced coma, battling infections and undergoing skin-grafting procedures every few days. When she regained consciousness on her 17th birthday, she was bewildered and voiceless from a tracheotomy. Peone learned her dominant hand had contracted gangrene, requiring amputations, and that she would likely never write, paint, or play guitar again. She had to relearn how to talk, walk, and use her arms. For a year, she depended on her family to help her daily functioning, while struggling to accept her disfigurement and the years of reconstructive surgery ahead.

Peone has since graduated from Sarah Lawrence College with high honors and will graduate from the UI Nonfiction Writing Program this May. She is the founding editor of the Cliffhanger and an editorial assistant at the Iowa Review.

In this excerpt from Peone's memoir-in-progress, the narrator challenges the pre-existing notions of bravery held by witnesses to her trauma by visiting with firefighters who regularly put themselves in harm's way. "One of the platitudes frequently used to comfort me was 'you are so brave,' which firefighters hear all the time. I resisted this compliment because I believed that bravery involved a choice, and I wasn't ready to be told that I had any control over my situation," says Peone. "This excerpt is about choice and control over the concept of bravery, and how that concept evolved for me in surprising ways during my immersive research at the Iowa City Fire Department, 12 years after my burn injury."