Andy Code used to think life was about getting ahead.

The business innovator and global health advocate shared the dangers of this rat race mentality—and encouraged UI students to break free from it—at this past fall’s “Life with Phil” talk at the Old Capitol. The annual lecture, hosted by the UI Center for Advancement, highlights the many ways students are affected—and can influence others—through philanthropy. 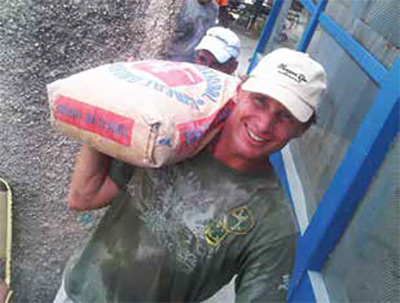 Code, 80BBA, 81MA, told the crowd that as a newlywed at age 21, he moved to Chicago and started “the race” at American National Bank. By age 26, the Iowa City native was hired to run half of Citicorp’s leveraged finance group in Chicago, and in three years he and two other vice presidents raised $82 million. They bought 11 companies and acquired 25 more to raise investor funds to $374 million.

As the money grew, Code noticed a change in his colleagues in the industry, who purchased multiple houses, expensive jewelry, and private airplanes. Code started to fear the loss of the material possessions he’d earned. But even worse, he realized his lifestyle didn’t match the values he was raised on and the faith he’d developed as a teen. He didn’t want his two sons to grow up without these core values. “Bigger was better and there was no cap,” says Code. “I was in this current and I couldn’t get out.”

Code resolved to change course. He formed an accountability group with three friends, who combined resources to invest millions in the third world and in Chicago’s impoverished. The group supported each other through life’s struggles and later formed the Chicago Fellowship. This weekly group Bible study, which often takes mission trips to help some of the world’s most marginalized, has grown to 1,300 Chicago businessmen and ministry leaders. Code says the service trips provide a “chance to experience the blessing that comes from giving back” and offer treasures beyond money: time and talents.

Through the service trips they’ve taken together as a family, Code and his sons have now developed a new definition of wealth. Says Code of his children: “They have things, but deep down they have this rooted love for other people and for giving back.”

No longer interested in raising profits without a bigger purpose, Code left CHS Capital, a Chicago-based private equity firm, after 23 years. In 2012, he co-founded Promus, a multi-family organization whose name is Latin for stewardship. The Chicago-based company has raised capital to build schools, open hospitals, and help those in the neediest parts of the world, including Honduras, Swaziland, Uganda, and Rwanda. The Code Family Foundation also has made donations to the UI Carver College of Medicine, allowing faculty and students to travel to Niger to provide vital health care. A recent gift to the UI Tippie College of Business and UI College of Nursing provides support for Hawkeyes to help Haitians with entrepreneurial and nursing training. It also supports a health care clinic and community health initiative with an orphanage in Haiti.

Says Code: “When you surrender something that you think really matters, it’s amazing what’s provided to you on the other side.” For Code, he discovered that investing in the lives of others through his time, talents, and money brought greater meaning to his own life.