View All From You
Share
IOWA Alumni Magazine | January 2017
Power of the Presidency
By Tom Snee
A political science class examines the historic role of the nation’s top executive. 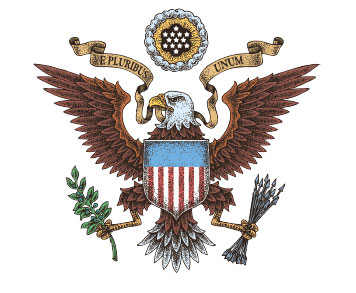 Cary Covington points to a simple line on his overhead projector and explains the range of power available to a U.S. president who wants to pass a law through Congress.

Then Covington marks it up with limitations to that power: filibusters and veto overrides and the aptly named “gridlock interval.” Suddenly, the line that represents a president’s range of power has been whittled down to a tiny segment.

“Presidents can lead only to the extent they can get others to follow,” UI political science professor Covington explains to the students taking his undergraduate class, “The Presidency.” “And the Constitution builds in lots of incentives for Congress not to follow the president.”

Offered every year in the College of Liberal Arts and Sciences, the class proved particularly relevant this past fall for students witnessing one of the most historic presidential elections in American history. Never before had the major parties nominated a woman or a real estate tycoon with no government experience as their presidential candidates.

In the end, Donald Trump won the Electoral College vote to capture the presidency.

The electors met last month and set the president-elect on track for a Jan. 20 inauguration in Washington, DC. All eyes are now trained on what Trump has done up to this point, what he will do, and what his presidency will mean for Americans and the world.

Covington has been teaching the class since the Reagan administration, taking over after beloved professor Don Johnson died in 1981. The class examines the constitutional origins and historical development of the presidency, its powers, and its organizational structure in the federal system of checks and balances.

Covington starts the class during the Constitutional Convention in 1787 as the framers gathered at the State House in Philadelphia to consider revisions to the Articles of Confederation, the country’s first constitution that was written during the Revolutionary War. The Articles quickly proved to be too weak to govern a large country made up of 13 sovereign parts; they provided no executive or judicial branch, so there was no one to execute Congress’ laws and no national court system. The framers quickly realized it was best to scrap the Articles entirely and start from scratch. While they knew the country needed a stronger executive than what was provided, they did not want to create one that would allow a path to tyranny as they’d experienced with King George III. So when they wrote Article II—the section of the document that lays out the powers and responsibilities of the executive branch—they kept it vague. They were more interested in Article I, which lays out the powers and responsibilities of Congress, the branch from which most law and policy would originate.

“The founders wanted a presidency that was strong enough to carry out the law, represent the United States in foreign affairs, and check the excesses of Congress,” Covington says. “They all thought, ‘let George Washington figure out what [the president’s] powers are and we’ll follow his lead.’”

Student Allison Goldstein, a senior from Buffalo Grove, Illinois, found that lesson especially eye-opening. “I was surprised to learn about how unclear the role of the president is in the Constitution, and that the position’s role is not clearly defined,” she says.

Future presidents, however, used Article II’s lack of definition to justify adding to their powers. None was more adept than Franklin Roosevelt, who significantly strengthened his powers with the New Deal, creating dozens of new federal departments and agencies to protect workers, create jobs, and attempt to end the Great Depression. Some initiatives, like Social Security and the minimum wage, remain today. Others like the Civilian Conservation Corps and Public Works Administration are long gone, but left lasting legacies as big as the Grand Coulee Dam or as small as the murals painted by WPA-funded artists in a project overseen by UI art professor Grant Wood.

By the time FDR died, he had become one of the most powerful leaders in the world. Later presidents added to the powers because they felt it necessary to contain communism, defend civil rights, or fight drugs. Lyndon Johnson’s War on Poverty created agencies with the hope of helping poor families and reinvigorating economically blighted areas; Ronald Reagan’s War on Drugs expanded federal police capabilities and made it easier to imprison people convicted of drug-related offenses; and George W. Bush’s War on Terrorism created the Department of Homeland Security.

Covington notes the framers never meant for the federal government to play the expansive role it does today. State governments were meant to be stronger than the federal, which was expected to focus on narrow duties like defending the country and operating a court system. The framers could not have anticipated a federal government that issues licenses to TV and radio stations, keeps airplanes from flying into each other, feeds poor children, builds and maintains millions of miles of highways, orders car makers to make their vehicles emit fewer pollutants, protects the safety of miners while they’re underground, helps keep ethanol producers in business, promotes U.S.-made products overseas, and keeps nuclear plants from melting down.

The professor also exposes a myth about the Constitution: that its framers had faith in the great mass of humanity to govern themselves democratically. In fact, he says the framers were leery of giving the masses too much political power, building as many walls as possible between voters and leaders. During the Constitutional Convention negotiations of 1787, one of the great tensions arose between small states, which feared being dominated by large states with more voters, and large states, which worried about ceding their power. But over and over again, Covington says well-timed compromises kept the two sides talking.

They all thought, ‘let George Washington figure out what [the president’s] powers are and we’ll follow his lead.'

“The framers were master politicians and knew how to find areas where they agreed and set aside those areas where they didn’t,” says Covington. “They were very sparse in their definitions and stayed away from any kind of detail or explanations that could cause one state or another to walk out.”

One of the tensest issues was the election of an executive, and discussions repeatedly failed to settle on a plan for presidential selection until the Electoral College was proposed and approved. Today, though, the college is often criticized as an anti-democratic remnant that doesn’t fit in modern politics.

Largely irrelevant for 200-plus years, the Electoral College has been vitally important in the 21st century, mostly owing to partisan gridlock that repeatedly divides the country. Covington says he’s always defended the Electoral College against critics but now hesitates. “It is hard to defend the Electoral College when two of the last five elections produced a president who lost the popular vote,” he says. However, he’s cautious about supporting any change because he’s worried “there might be unintended consequences that we regret.”

Throughout America’s history, the hallmark of American politics has been the willingness of people on all sides to compromise. But more recently, Covington notes growing numbers of voters have concluded their representatives have failed to deliver on promises and demand their leaders stand firm on principles. Leaders willing to compromise are seen as weak and willing to sell out their constituents to an elitist establishment.

As a result, the mechanisms designed to force competing interests to settle their differences have produced a sustained period of gridlock. The result has been a declining public trust and confidence in federal government.

This is the exact sort of disillusionment that helped propel Donald Trump to victory, Covington says. Even though he’s fortunate to have Congress controlled by his same party, in this kind of atmosphere he may still face difficult challenges with moving his policies through. Voters often expect miracles, but a president has to balance the needs of a national constituency with the needs of 535 members of Congress who are mostly interested in what’s best for their state or district. Many times, those agendas are fundamentally conflicted.

The next four years will show whether the United States remains in this place of gridlock or whether Trump’s unconventional style marks a change in the powers of the president.