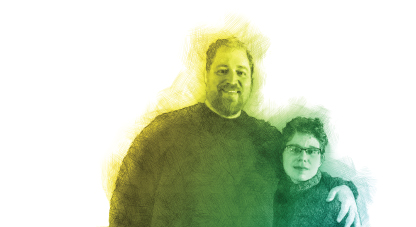 Instead of sitting down to turkey and stuffing this past Thanksgiving, two Iowa alumni loaded up their car with donations from their local church and headed north. When they arrived at the Standing Rock Indian Reservation, James Robinson and Megan Carnes felt as if they'd entered a different country.

The couple joined the Standing Rock Sioux and thousands of other protesters who oppose the Dakota Access Pipeline that would transport 470,000 barrels of oil a day across four states—including territory that still belongs to the Native Americans. Just last month, the U.S. Corps of Engineers ordered a halt to the project. The matter is now in federal court. Carnes says the experience has challenged both her and Robinson's altruistic ideas about what it means to support another culture's sacred space.

An Iowa Writers' Workshop graduate, Carnes tells it best herself.

"We found the orientation tent, which was a military-looking thing that had condensation dripping from the ceiling. There were hay bales and smudgy windows. I perched on a bale stack, and my head pushed into the top of the tent. The speakers—two non-natives—welcomed us. They admired our energy. Then they talked of colonialism.

Later that day, James approached me with news. The council asked for people to give up their hotel rooms so some elders could sleep away from the cold.

I blinked. We didn't bring our camping gear. Hotels were booked for miles. If we surrendered our room, we would have to leave. James looked at me. He pursed his lips. It took him another five minutes to convince me to do the right thing. I'm the actor and the talker in our outfit. In matters like this, James is the one who thinks.

At the hotel, we found a tribal leader. He had square glasses, a silver braid, and a Vietnam veteran's hat. James made the offer, and the leader widened his eyes. Behind him, a young Lakotan said, 'Nice.' The leader said he wasn't sure he needed us, that it would be helpful if we could maybe wait and see.

After an hour, an ancient man appeared with a slightly less ancient man who helped the first man sit on a walker. The sitting man had a Word War II hat, a raised chin, and a tightly drawn mouth. The tribal leader shook James's hand and shook it again. 'We're all right,' he said. 'You can keep your room. But we do thank you.'

We went upstairs for dinner. We were exhausted and filthy, but also satisfied that, at last, we had done something to help. Looking back, it all seems so obvious and so hard to see. The best thing we could do at Standing Rock was to make space for those who have spent over 500 years asking us to yield that very thing."