In Oct. 20, 1965, a little over a year after returning from Mississippi's Freedom Summer, Steve Smith approached the open microphone at the Iowa Memorial Union's "Soapbox Sound Off." This weekly event had become a safe and well-known place for Vietnam War protesters and others to exercise free speech. 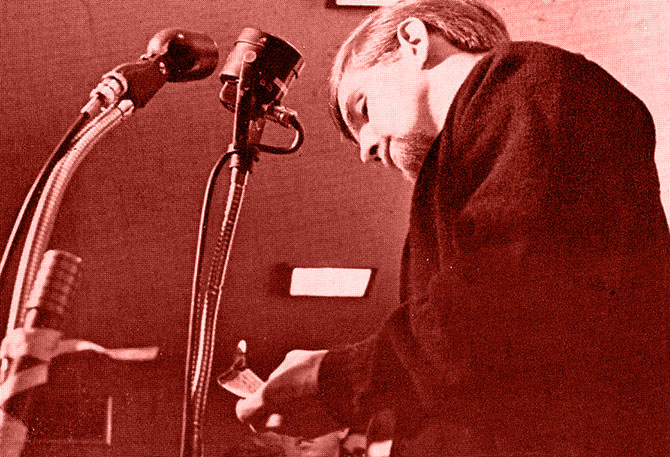 No one could've expected what the UI sophomore would do next. His Selective Service draft card in his left hand, a lighter in his right, Smith set the paper ablaze. He was the first person on a college campus—and only the second in the nation—to burn his draft card after Congress and President Lyndon Johnson criminalized that act. Just the week before, a man by the name of David J. Miller burned his at an Army induction center in New York City.

"That image symbolizes, to me, a crucial turning point in the campus protest era," says UI Archivist David McCartney, who has worked to build the university's collection about Smith for the past four years. "Whether Steve realized it or not, he influenced the tone and direction of the antiwar debate by forcing the issue."

"That image symbolizes, to me, a crucial turning point in the campus protest era."- UI Archivist David McCartney

A new online exhibit from UI Libraries is inspired by McCartney's research into Smith's story as well as his interest in the broader spirit of campus activism at the time.

"Uptight & Laid Back: Iowa City in the 1960s" debuted this summer, highlighting over 150 entries pulled from 30 different collections in UI Archives. With tabs such as "Student Life," "Pop Culture," "Politics & Protest," and "Civil Rights," the site is a comprehensive audiovisual tour through a decade unlike any other. 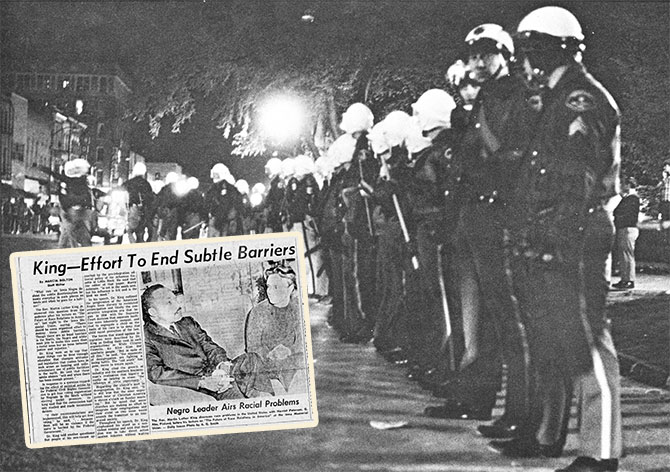 "Uptight & Laid Back" efforts began in earnest with an email in 2012 from an undergraduate student who wanted to know if UI Archives had information to share about Smith. McCartney discovered that the UI had very little, so he set about trying to uncover what he could. He was dismayed to learn that Smith had died in 2009, but McCartney contacted family members, including Smith's widow and two children from a previous marriage. The more he learned, the more the project both fascinated his mind and broke his heart. Already firmly planted in the 1960s through Smith's story, McCartney and his UI Libraries colleagues decided to curate an entire website to recognize the 50th anniversary of those tremendous, tumultuous times. More than this, "Uptight & Laid Back" is a UI response to a strong interest among current students to connect with the '60s generation. 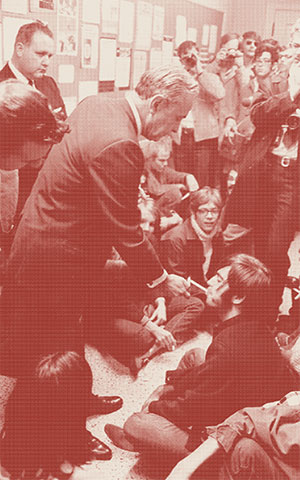 About a dozen Iowa City-area citizens joined Steve Smith during 1964's Freedom Summer in Mississippi, an effort to register African-Americans in the state with the lowest percentage of black voters at the time. 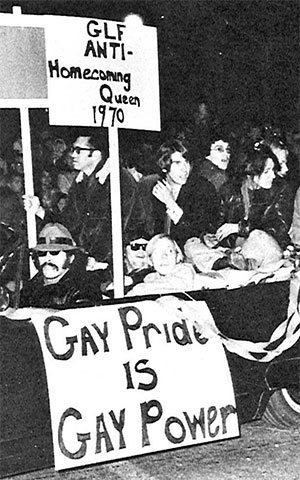 Visitors can view the dramatic evolution of campus through documents, posters, photos, audio clips, and film footage. From fashion and music to politics and feminism, the materials cover multiple aspects of the decade—including those who disagreed with protesting the war. The site spans a period that begins with an audio recording of Martin Luther King  Jr.'s 1959 speech at the IMU and ends with video of a May 1970 rally, the culmination of national student unrest in the wake of the Kent State shooting. That spring, UI President Sandy Boyd, 81LHD, gave students the option to leave and take the grade they'd earned up to that point or finish finals. The website features the commencement address that took place on May 28, 1970, for those who chose to stay.

Other gems include a 1958 lecture from physicist James Van Allen, 36MS, 39PhD, on "The Role of Research in the University;" the last-known recording from President Virgil Hancher, 18BA, 24JD, 64LLD, in June 1964; a photographic essay from journalism student David Luck, 70BA, 75MA, 77MFA, on the 1969 student protest against Dow Chemical's recruitment on campus; talks given by Iowa Writers' Workshop legends Paul Engle, 32MA, Allen Ginsberg, and Kurt Vonnegut; and a poster asking "Got a Problem? Try Dean Huit ." Marion Huit, 49MA, was the longtime ombudsman for students, who, at the height of campus tensions, held special office hours to hear students' concerns. An iconic image of him lighting a student protester's cigarette (see above) speaks to the commitment that Huit and other university administrators like Boyd and Phillip Hubbard, 46BSEE, 49MS, 54PhD, then dean of academic affairs, had in making sure the UI didn't devolve into the violence seen at other schools across the nation.

Children gather around a voter registration booth in the South in the early 1960s. 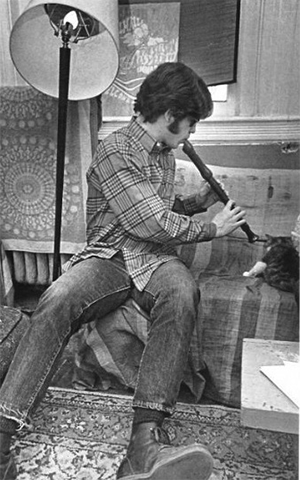 A scene from an off-campus student apartment, 1968.

On the lighter side, visitors will find copies of football game tickets and Homecoming fliers and versions of the Iowa Fight Song from the Hawkeye Marching Band. They'll discover a delightful excerpt from the 1959 Old Gold Singers, featuring a "Porgy & Bess"solo from international opera star Simon Estes, 86BM. A click on most material takes visitors to the Iowa Digital Library for further discovery.

Although so much material exists that's not yet included on the site, McCartney hopes what's currently available brings back memories for those who lived it and enlightens those who can only imagine. "Uptight & Laid Back" remains a work in progress, but UI Libraries staff will continue building it as they come across interesting relics. Additionally, they're asking alumni to help create content by submitting personal '60s stories here.

As for the man who started it all, Steve Smith was never the same after Freedom Summer—a national volunteer campaign in 1964 to register as many black voters as possible in Mississippi. Growing up in Marion, Iowa, Smith was an all-American kid, a letterman in football, basketball, track, and wrestling. He was a class officer, an honor roll student, a Boys State participant, and the son of a proud World War II veteran.

In the fall of 1963, Smith arrived at the UI as an ROTC student to study engineering. By the following summer, however, he grew disenchanted with his country's state of affairs and became a political activist vocal in rallies and marches against racial discrimination. In July 1964, at age 19, he registered for Freedom Summer and traveled to Canton, Mississippi, where he was soon detained by a sheriff's deputy and brutally beaten. Although the Freedom Summer volunteers did not register many voters, they did succeed in turning the nation's attention to the repression that had supported the Jim Crow system and the persecution of black citizens and civil rights workers in the Deep South.

A WSUI announcer takes the airwaves, from the 1968 Hawkeye yearbook.

When he came home to the UI, Smith turned his attention to escalating U.S. involvement in Vietnam. Two days after burning his draft card—a crime that carried a maximum five years in prison—Smith was arrested by the FBI and placed on probation. He felt even jail time was a small price to pay to oppose what he believed was an unjust war, but the larger price he paid for such activism came in his cognitive and emotional decline. Academic transcripts show that his grades suffered after Mississippi, and Smith ultimately left the UI after the fall '65 semester. He bounced around jobs for many years, eventually settling into a career in computer science. In 2000, he suffered a stroke that diminished his abilities for the last years of his life. He died in 2009 at age 64. 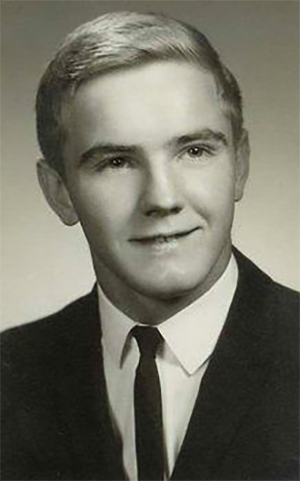 McCartney says Smith was ahead of his time, willing to stand up for his antiwar convictions long before it became socially acceptable to do so—long before Walter Cronkite's February 1968 broadcast that forever altered the American attitude about Vietnam. From that closing address on the CBS Evening News:

"We've been too often disappointed by the optimism of the American leaders...both in Vietnam and Washington, to have faith any longer in the silver linings they find in the darkest clouds. For it seems now more certain than ever that the bloody experience of Vietnam is to end in a stalemate. To say that we are closer to victory today is to believe, in the face of the evidence, the optimists who have been wrong in the past. …It is increasingly clear to this reporter that the only rational way out then will be to negotiate, not as victors, but as an honorable people who lived up to their pledge to defend democracy, and did the best they could."

McCartney believes the day Steve Smith burned his draft card—three years before Cronkite's words—he dared others to act on the moral values of their conscience. For many, that's what the '60s were all about. 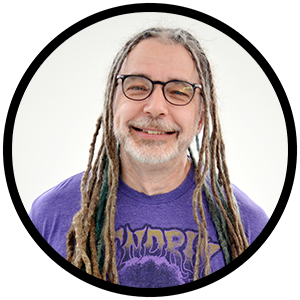 UI archivist Dave McCartney has these suggestions to help you get started browsing the "Uptight & Laid Back" website.

First is a do-it-yourself wandering through the archived collection of the Daily Iowan. This online archive has a copy of the student newspaper from 1868 to the present, and visitors can look up papers from the '60s to read the headlines.