View All From You
Share
IOWA Alumni Magazine | October 2015
Talk Back
By Shelbi Thomas
We recently asked followers of our Facebook page to share what helped ease their transition into university life. Here are some of the responses:

I walked around campus and found every lecture hall and classroom before classes started in the hope that I wouldn't look and feel like a lost freshman. It worked.
—Jill Sturtz Rains, 85BA 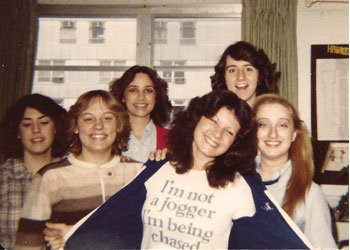 I think making friends in the dorm and in my classes helped me adjust to campus life. I also visited the Hillel House and immediately met people there.
—Ivy Harris Coleman, 97BA

I was a member of the Hawkeye Marching Band and reported in Iowa City at least a week before other students, moved into Hillcrest dorm, and met great friends during the band workouts prior to fall semester 1961.
—Jim Remley, 65BA

Courses in Common. It was great going through three classes with the same group, and we still keep in touch.
—Bridget Petesch Shaeffer, 06BA

Met some girls on my floor in Burge freshman year, and, 36 years later, we are still friends. [We] visited our floor in Burge this summer!
Diane Jansen Fennesy, 83BA

I know that Greek life isn't for everyone. However, being on campus a week early and going through Rush was the best thing that I ever did. It gave me the opportunity not only to get to know Iowa City, but also to make many new friends before classes even began.
—Megan Walsh Urbahns, 96BA

The university is such a busy place with so much to do, so I got out a notecard and wrote a list titled, “Why I'm Here.” On my list? 1. Get my degree. 2. Make some quality friends. 3. Get a job to stay financially stable. 4. Maybe find a spouse. I never thought that I'd have three of four goals met within a few weeks.
—Kate Engelbrecht Stierman, 05BBA