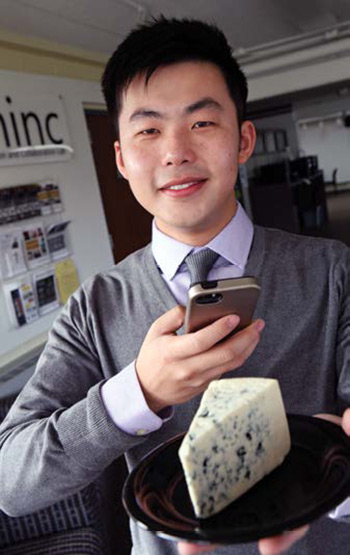 RuiHao Min put a new spin on the old adage to make lemonade out of lemons, turning moldy cheese into a fresh—and profitable—idea.

It all began Min's freshman year at the UI, when the Chinese native took a fellow international student out to eat on a first date. "We were both confused by items on the menu, and she asked for my suggestions," says Min, 13BBA, who studied marketing and economics. "Even though I had no clue what to order either, I wanted to show I was culturally savvy, so I ordered her the only thing on the menu I could recognize."

Unfortunately, neither one expected a salad topped with pungent blue cheese. Though Min didn't land a second date, he did get the idea for the Blue Cheese mobile app, which helps Chinese international travelers translate menus and make informed decisions on what to order.

How does the app work?

Blue Cheese users take a photo of unfamiliar words on the menu. With nearly 10,000 food items in its database, the app offers not only a literal translation, but also a picture of the dish and details about ingredients, taste, and other users' recommendations.

A search for "omelet" describes the egg dish's method of preparation. "It has a soft taste and is often filled with shredded ham, cheese, and vegetables," explains the app. "It is similar to Chinese pastry and a safe choice for most customers."

The free iOS app launched this past summer and received 70,000 downloads within three weeks of its debut. Featured as the Best New App and the Best of July on the Apple App Store's Chinese site, Blue Cheese now boasts more than 80,000 users. The app has also drawn the attention of media outlets throughout the United States, China, and Hong Kong.

What's next for the app?

With the knowledge he gained from the program, Min plans to expand the app's language options and add recommendations to help match international travelers with local restaurants. He'd also like to include calorie and allergy information, as well as an option for users to share their dining experiences over social media.

Now a UI graduate, Min has been working full-time on Blue Cheese, seeking investors to accelerate his business and market development. "Although we dream of being a global company," he says, "Blue Cheese is truly an American dream from Iowa."

Watch a video explaining how the app works.

Join our email list
Get the latest news and information for alumni, fans, and friends of the University of Iowa.
Sign up now
Related Articles
Ask An Expert: Cryptocurrency 101
Iowa law professor Chris Odinet shares what you need to know about Bitcoin and other emerging digital currencies.
Chocolate Connoisseur
Iowa alumnus Lee Scott Theisen divulges the rich and surprising history behind our favorite snack.
Iowa Alumna Creates a Support Network for Grad School Mental Health
The PhD Balance online community helps graduate students cope with the pressure of academia.
Ask an Expert: What Should You Know for Tax Day?
Tippie College of Business professor Kay Hegarty shares some tips for this tax season.