The first postcard arrived at Emily Martin's office in April 2013. Over the next six months, another 99 turned up in her mailbox at the University of Iowa's North Hall—from nearby in Iowa or as far away as Massachusetts, California, England, Italy, and Chile. No typical mass-produced missives with vacation images and mundane "Wish you were here" greetings, these unique artistic items celebrated the power of a colorful world.

LEFT: Personal stories or experiences inspired many of the postcards. Kate Whorton decorated her card with an intricate paper cutout of a Chinese temple, one of many she's made since going to China to adopt her daughter.
RIGHT: When Carolina Chini Larrea of Chile received the Pantone 19-3438/Bright Violet card, it immediately brought to mind the famed Chilean folklorist and musician Violeta Parra. So, she decorated the card with Violeta's likeness and wrote on the back "La voz de Violeta agradeciendole a la vida" ("Violet's voice thanking life").

In a rainbow of shades, the cards feature paint and ink, embossments, and media such as lace, alpaca yarn, photographs, and beads. On the reverse, some bear designs or a personal message from the artist—many of whom Martin had never encountered before the start of her Pantone Postcard Project.

The Pantone color-matching and technology company, which offers a universal, standardized system of shades and tints, produces the cards as part of a trendy line of vibrant coffee mugs, mobile phone cases, wristwatches, and other stationery. The company is more famous for its thousands of Pantone hues displayed in swatch books (like color chips at a paint store), which enable graphic artists and designers to select shades that will reproduce accurately, whether on paper, textiles, or plastics. When Martin's sister bought her a set of 100 postcards each with a different Pantone color on the front, she inadvertently unleashed a kaleidoscope of creativity.

LEFT: Before she received her card, Mary Sullivan, a graduate assistant at the UI Center for the Book, had been studying lacemaking. The card color, Sauterne, references a particular kind of French wine, so Sullivan created a highly detailed piece of lace shaped like a grape leaf.
RIGHT: Some postcards required extra postage before they could be delivered back to Emily Martin. She told the artists, "Please do not be discouraged by a few of the postcards arriving postage due. 33 cents is a small price to pay for artistic freedom."

An artist and a faculty member in the UI Center for the Book, Martin, 75BFA, 77MA, 79MFA, wanted to find an inspired use for the postcards but was overwhelmed by the possibilities. So, one evening, she promised on her Facebook page to mail a postcard to anyone willing to turn it into a creative project and send it back. By the next morning, all 100 postcards had been claimed.

Like several other postcards, One Peach Pea made a humorous play on words.

Martin set no criteria, rules, or guidelines other than that the cards should be able to travel through the postal system—she simply asked participants to be inspired by the Pantone shade they received. After all, whether people realize it or not, she says, color plays an important role in their lives. People express their personalities in the hues they wear, the shades on their walls, and what they claim as favorites. Color celebrates the visual mood of an era—hot pink and vermillion orange in the Sixties, avocado green and harvest gold in the Seventies—and can literally affect thoughts and emotions, making people see red when angry or feel blue when depressed. 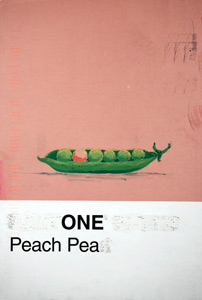 Some postcards set a more somber tone. Martin's daughter Tess Varney, who lives in Boston, turned her card into a memorial commemorating the bomb attack during last year's marathon. She inscribed the front with the date of the event, along with stick figure spectators watching a runner head toward the finish line. The reverse shows eight stick figures, some missing limbs, sprawled in a pool of red ink.

Since its low-key beginning, the Pantone Postcard Project has steadily amassed attention and appreciation. It's appeared in exhibits in Cedar Rapids; in Venice and Cordona, Italy; in Santiago, Chile; and in Washington, DC. This June, it goes on display at RSVP, a local business in Iowa City, and next year it will appear at the CODEX International Book Fair in Berkeley, Calif. The project also boasts its own Facebook page (with a few hundred fans) and a website.

For months, the postcards hung in spectrum order on the wall of Martin's home studio. Every day, she'd pause to admire the luminous display—an extraordinary and unforeseen outpouring of artistic talent. "I set this goofy project in motion," she says, "but now it's taken on a life of its own."