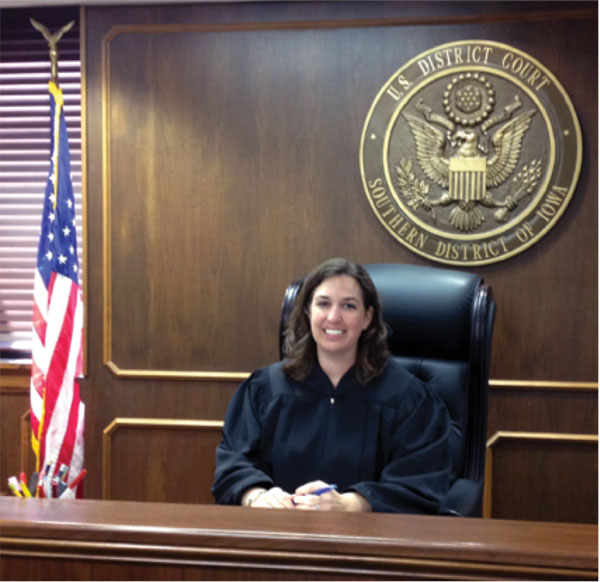 Before taking the bench as the first female judge in Iowa’s Southern District, Stephanie Rose attended "baby judge school," where she was assigned a mentor, received tips for managing her docket, and toured a federal prison.

Stephanie Rose sat at home in Center Point, Iowa, with her family, watching her fate unfold on C-SPAN. As a U.S. Senator cast the 51st vote in her favor, it was official: she would become the first female federal judge to serve Iowa’s Southern District and the youngest federal judge in the nation.

"There are dreams that you don’t really dare to dream except in the far reaches of your subconscious heart," Rose, 94BA, 96JD, told the audience at her investiture ceremony this past November at the Des Moines federal courthouse. "This is mine."

After graduating from the UI, Rose joined the U.S. Attorney’s Office in Cedar Rapids, where she prosecuted more than 800 cases, ranging from drug offenses to immigration violations. She was nominated to become a federal judge in October 2011, but had to undergo an extensive vetting process. Officials examined her physical, mental, and financial health; did a thorough FBI background check; evaluated her past trial performance; and interviewed hundreds of people who knew her personally or professionally.

"[Rose] could easily have commanded a big salary with a top law firm," her nominator, Iowa Senator Tom Harkin, said during her Senate hearing. "Instead, she opted for public service and long hours as a federal prosecutor, working to uphold the rule of law, making our neighborhoods safer, and advancing the cause of justice."