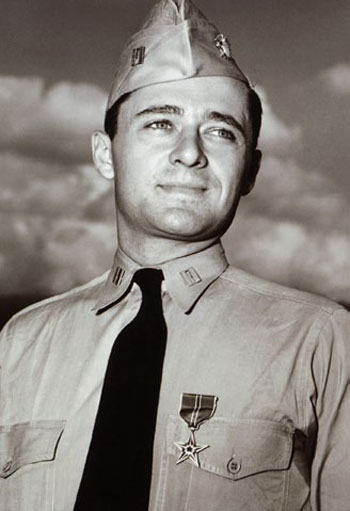 In this photo taken in Guam shortly after World War II, Rear Admiral (ret.) Mac Showers, of Arlington, Va., proudly wears the Bronze Star received for his critical intelligence work. After the war, Showers continued in naval intelligence before moving to the Central Intelligence Agency. Although Showers is often listed with the UI Class of 1941, he actually completed and received his university degree while on leave from the Navy in 1944.

For 72 hours during the Battle of Midway in June 1942, Mac Showers remained glued to his duty station at Pearl Harbor—occasionally resting his head on the desk, but never succumbing to sleep.

All that spring, he had served on a Combat Intelligence Unit team known as Station Hypo, tirelessly working to intercept and interpret Japanese Navy radio codes that contained secret plans to attack and occupy Midway atoll in the North Pacific.

Showers, 44BA, and his team proved so successful that they were able to supply U.S. Admiral Chester Nimitz with specific details about exactly when and where Japan's forces planned to strike. Their efforts secured an important U.S. victory a mere six months after the devastating assault on Pearl Harbor, shifting the momentum of World War II.

"Had it not been for the excellent intelligence he received, Nimitz said he would have read about Japan's capture of Midway in the morning paper," recalls Showers, a UI journalism and political science senior when he left in 1941 to begin active duty with the Naval Reserve. "It is my greatest memory."

After being commissioned as a Navy ensign, Showers was quickly introduced to the world of naval intelligence, a role he felt somewhat prepared for thanks to his background in journalism. The research and writing he tackled was comparable to his work on the Daily Iowan—only this information was classified. Every time he sat down to type an intelligence report, he remembered that a good writer must include who, what, when, and where in his first paragraph.

In February 1942, he was sent to Hawaii and randomly tapped to fill an open billet in the Combat Intelligence Unit. On the Station Hypo team, cryptographers first studied and broke the radio codes, Japanese linguists translated them into English, and finally, intelligence analysts like Showers wrote reports on their significance and plotted the movement of ships. The data extraction was an arduous and tedious process, involving a manual dictionary of 50,000 Japanese code groups from which the team had to divine meaning "one by painful one."

A major coup came when the team figured out that the letters "AF" stood for Midway. Military historians have called the Battle of Midway—in which the heavily outnumbered U.S. force sank three Japanese carriers in 20 minutes—one of the most stunning and divisive blows in naval history. A fourth Japanese carrier was sunk later that same day.

This year, as the last surviving officer of Station Hypo, Showers marked both his 93rd birthday and the 70th anniversary of the battle that helped decide World War II.

"I've been blessed with a very good, interesting, productive life," he says, "and if I had it to do all over again, I'd want it to be exactly the same way."