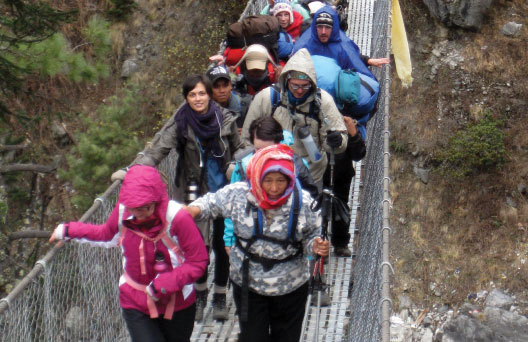 The flimsy bridge gleams against the shadowy background of the forested slopes, as seemingly insubstantial as a spider's silken thread. It trembles in the gusts of wind, while far below an icy river thunders over sharp rocks.

A woman wavers at the edge; she needs to cross, but fear holds her back. Then a firm hand gently clasps hers, a reminder that she is not alone in this precarious journey. Together, the two women take the first step across the chasm.

The helping hand—warm, brown, strong, and kind—belongs to Ang Lhakpa, a Sherpa guide who is shepherding a group of Iowans to the base camp of Mount Everest. Fourteen members of this group have already endured a different kind of terrifying journey—one that began with the painful word "cancer."

A 25-year-old woman underwent a double mastectomy after discovering she had breast cancer; a 53-year-old-man beat tonsil cancer; and a 51-year-old woman endured a lifetime of benign but horribly disfiguring tumors before almost losing her left arm to a malignant mass. Six of the women in the group—including UI alumnae Theresa Britt, 86RTT, and Lynne Vestal*, 84BA, 85MA—all survived breast cancer. Other participants battled prostate cancer, a brain tumor, leukemia, and Hodgkin's disease.

Now, they're here in Nepal to pit their human frailty against the indifferent peak. To prove that they can. To give thanks that they're alive. To show that there's life after cancer.

Although Ang Lhakpa can barely speak English, the travelers know instinctively they can trust her with their lives. Back home in Iowa, they'd already come remarkably close to death. Trekking to Everest wasn't something they'd ever imagined (in fact, many have never traveled outside the U.S.). None of them had envisioned cancer, either. They learned some hard lessons in what expedition leader Dr. Richard Deming, an oncologist and medical director of the Mercy Cancer Center in Des Moines, calls "the university of cancer." They know now that "normal" life can capsize in a heartbeat, taking with it all plans and preconceived notions. 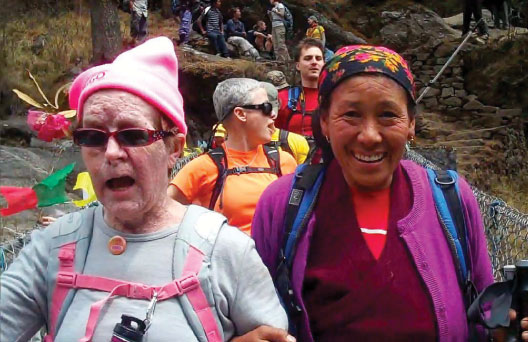 Many people describe their cancer experiences through the metaphor of climbing a mountain. That's one of the reasons Deming thought the Everest expedition was perfect for the group. "Patients come through their cancer journey with a better sense of who they are, what their priorities should be, and gratitude for having been given a second chance at life," he says. "They have a greater appreciation for their fellow human beings. They feel more connected to the world."

More than most people, cancer survivors understand that death can happen at any time, and the best way to deal with that fearful reality is to make the most of every precious day. Vestal agrees that her encounter with breast cancer provided a unique perspective on human vulnerability and courage. "We are all mountaineers," she says. "We all have things we are not in control of." 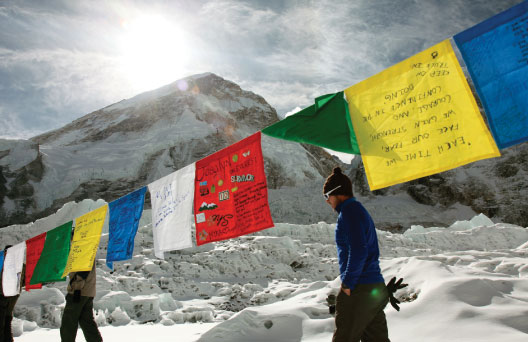 Nepalese prayer flags sway in the breeze as the Iowa group participates in an American Cancer Society "Relay for Life" to honor loved ones who lost their lives to cancer.

Deming conceived the idea for the three-week "Above & Beyond" trip with the help of adventurer Charlie Wittmack, 01BBA, 06JD. Wittmack set out to climb Everest this past April as part of a multi-continent triathlon, and he agreed to host Deming, his patients, and 14 supporters at the base camp of Mount Everest. With financial support provided by generous donors, the survivors simply had to pack their bags and steel their nerves.

Everyone expected the trip to be transformational. Nepal's magnificent scenery and welcoming culture inevitably stir personal awakenings; plus, as a result of their illnesses, the cancer survivors already had been shaken out of any complacency about life's smooth unfolding. Still, no one could have anticipated what did happen on the mountain—and afterward.

"In Nepal, you're stripped down to the essential elements of life. Too much stuff becomes not only unnecessary, but a burden," explains Deming. "You learn to value the simple things, and you learn to rely on yourself and your teammates. It also gives you time to distance yourself from the world back home and the mundane problems that we perhaps assign too much importance."

Everest presents a formidable challenge to any visitor, let alone people who've undergone harrowing medical procedures and treatments. The Iowans spent two months training for their adventure, taking spin classes and yoga. Even so, the tremendous effort required to climb the slopes of Everest drained their physical and emotional energy. The weather was often freezing, the trail rough and steep. Within days, most of the travelers were sick with bronchitis or diarrhea, and their heads pounded from the high altitude.

Ultimately, their fate on the mountain would be determined by their faith—in themselves and their Sherpa guides.

Even as they hauled enormous backpacks up the mountain, the Sherpas were a constant, joyful presence. "They went to bed after us, waiting until the last person retired for the night. They rose before us, waking us with smiles, good-mornings, and hot cups of tea," says Brian Triplett, 06BA, who accompanied the group and wrote the expedition blog. "I never heard a complaint, saw a rolling of the eyes, or witnessed a step taken without intention. They carried all those pounds up the mountain on their strong backs and in their kind hearts."

Of all the guides, Ang Lhakpa probably formed the closest relationships with the travelers, who called her "Mom" for her quiet compassion and gentle demeanor. When one traveler became too weak to continue, Ang Lhakpa took her back to rest in her own home in a nearby village.

"She took special care of those who were having a rough go at the trail any given day," says Justin Anderson, who made the trip following treatment for a brain tumor. "Any time someone asked how much further, Ang Lhakpa would reply with a smile and an 'Ookay, five more minutes!'" 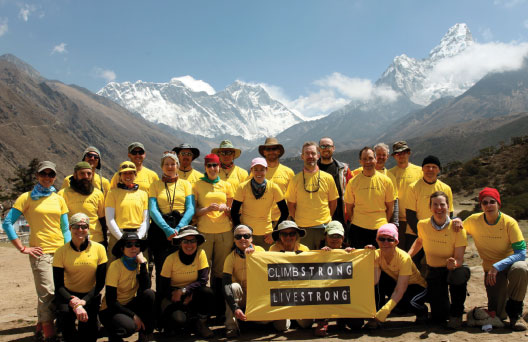 Even before heading to the Himalayas, many of these cancer survivors and supporters had already bonded as participants of the LiveStrong program.

Even on the coldest, toughest days, the Iowans often found themselves stunned by beauty and new experiences: the gnarled spines of the ancient mountains, the pungent aroma of pine trees and yak droppings, the soothing jingle of donkey bells. With a renewed sense of life's miracles and mysteries, they lifted their eyes to the serene peaks, gulped in the pure air, and found the strength to keep putting one foot in front of the other.

The extreme environment of the expedition, combined with the group's similar health experiences, created an intense bond. Strangers became friends who helped each other carry backpacks and shared jackets, food, and water. Group members who forged ahead on the trail would act as cheerleaders for their slower companions. Next day, it could be their turn to rely on the kindness of others. "Way to go!" they yelled in encouragement. "You can do it! You rock!"

Gradually, the survivors realized that cancer had left them with more than physical scars and searing memories; it also gave them confidence and determination to overcome other adversities and challenges. "This was the most difficult thing I have ever done," says Kathy Wennihan, the former sarcoma patient who held Ang Lhakpa's hand all the way across the perilous bridge. "Beating cancer was nothing compared to what we did. I am still trying to take it all in. I still find myself in tears when I think about it."

On day nine, at 17,600 feet and in a lightly falling snow, the group finally stumbled into base camp. Exhaustion quickly gave way to jubilation. "It was harder than hell, but we made it!" cried Theresa Britt, her voice choked with emotion. 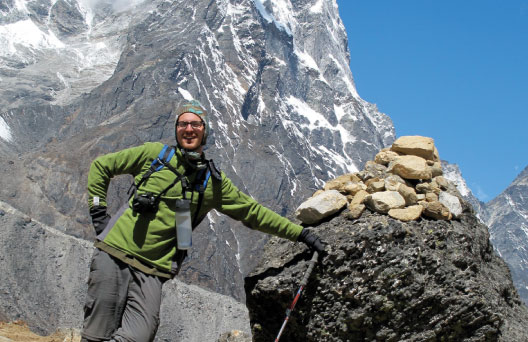 Justin Anderson, who overcame brain cancer, poses next to a boulder on the way to the Mount Everest base camp.

That night, the Himalayas rewarded their efforts with a magical sight that few ever witness. The moon soared up from behind the encircling peaks, transforming the everyday view of sleet, ice, and huddled tents into a silvery scene from a snow globe. The next day, the Iowans carried out a special American Cancer Society "Relay for Life" ceremony at a record-setting altitude. Against an intense blue sky, they strung up colorful prayer flags and then walked in a solemn circle to honor the memories of others who had lost their battles with cancer.

The next day, they began the long trek down, aware that they were subtly but unmistakably changed. Emilia Chadwick, the young breast cancer survivor, says: "I expect more out of people and life now. I absorbed so much strength and wisdom from the whole team. Cancer was an obstacle, while the trek was an adventure. And our future is now open to anything."

As they prepared to return home to Iowa, the survivors wondered how they would remember the trip in a year's time. They knew they'd stay in touch—they were now bonded for life. But what other perspectives and insights would emerge? Just a few weeks later, they received a shocking reminder of their time on the mountain and the uncertain nature of life. 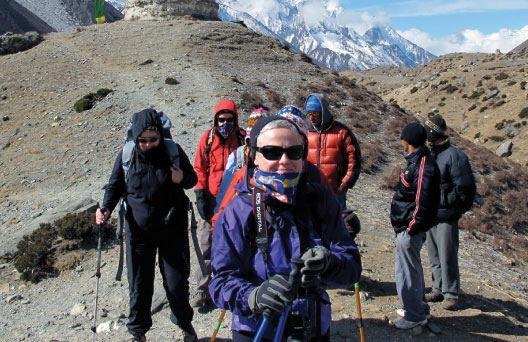 Breast cancer gave Karen Parman a new appreciation for and outlook on life, which she put to the test on the slopes of Mount Everest.

In June, Deming contacted the group with news that Ang Lhakpa had been diagnosed with leukemia. Immediately, "Above & Beyond" members reached out a helping hand to their beloved guide, sending funds to help cover some of the treatment costs. As Deming arranged regular supplies of donated medication (Ang Lhakpa has a form of leukemia that is treatable but not curable), he couldn't help but marvel at the seemingly Karmic turn of events.

"Events like this make it nearly impossible to support a worldview of atheistic randomness. The power, mystery, and irony of the situation beg for a more spiritual definition of the workings of the world," he says. "Ang Lhakpa was diagnosed with cancer just weeks after she had personally cared for a group of cancer survivors. The facts take my breath away and make me think of the common bonds that exist among all of us."

Indeed, when Vestal learned the news, her immediate thought was: "So this is why we went!"

Cancer bridged distance, time, language, and culture to link the lives of a Sherpa woman and 14 Iowans. Now, it was the survivors' turn to guide Ang Lhakpa to safety.

They knew the way; they'd already climbed this mountain.