View All From You
Share
IOWA Alumni Magazine | August 2011
Bought and Sold
By Jennifer Hemmingsen
Slavery isn’t confined to the history books. In fact, this thriving international industry still operates throughout the United States. Here’s how some UI alumni work to fight human trafficking. The 11-year-old girl standing alone on a street in Oakland, California, isn’t lost. She hasn’t accidentally strayed from her parents, and she won’t return to a safe home later tonight. She’s waiting for a man to hand over money and take her to a run-down motel for sex.

Even if this child dreads the pain and fear of the upcoming encounter, she doesn’t have a choice. She’s a slave. Right here in America. More than 150 years after Americans made a deliberate and hard-fought decision to abolish slavery, human traffickers operate nearly undetected in the United States. Not just in big cities and faraway states, but across the nation—even in Iowa.

“So many girls from troubled backgrounds are being exploited,” says Kate Walker, 11JD, who witnessed such abuse when she worked last year as an intern with the National Center for Youth Law in Oakland, one of the country’s largest hubs for child sexual exploitation. “On any given night, hundreds of thousands of children are on America’s streets being sold for sex.”

Stunned and dismayed, Walker decided to use the skills she gained at the UI to help prevent such tragedies. Joining her in the cause are two other Iowa alumni—Maggie Tinsman and Drew Henning. Undaunted by the scale of the problem, they tackle human trafficking on different fronts and in other parts of the nation.

Worldwide, UNICEF estimates that some 1.8 million children a year are forced into the commercial sex trade and calls human trafficking one of the world’s fastest growing industries.

Here in the U.S., many experts agree that trafficking is widespread—but also difficult to track accurately given the particularly clandestine nature of the crime and the fact that few victims are able or dare to come forward. Just a few weeks ago, film star, former UI student, and anti-trafficking advocate Ashton Kutcher engaged in a war of words via Twitter with the Village Voice newspaper, which had published an investigative report challenging often-cited statistics about the numbers of children affected. Nonetheless, various federal agencies—including the FBI, the Department of State, the Department of Health and Human Services, and the Department of Justice—consider the problem grave and heinous enough to warrant significant time and resources.

Between January 2008 and June 2010, the Department of Justice investigated 2,515 incidents of human trafficking. Forty-eight percent of those cases involved allegations of adult prostitution, while 40 percent concerned the prostitution or sexual exploitation of a child (under federal law, any case of child prostitution is considered human trafficking). About 350 incidents involved allegations of labor trafficking in commercial industries, such as hotels, hair salons, and restaurants, and in unregulated or illegal activities like drug sales, forced begging, and roadside sales.

Experts believe that such cases are merely the tip of the iceberg, that many more people are bought and sold by traffickers of all stripes—from independent contractors to street gangs to international criminal syndicates.

Like many people, though, Iowa State Senator Maggie Tinsman*, 74MSW, was unaware of a human trafficking problem in the U.S. That changed in 2005, when she toured the U.S. Department of State in Washington, DC. An official described victims brought in from other countries, lured by the promise of jobs, but then stripped of their passports, forced into prostitution, or robbed of their wages. Just a few years prior, the official added, the federal government had passed a law outlawing human trafficking—the recruitment, harboring, transportation, provision, or obtaining of a person to perform labor or a commercial sex act through force, fraud, or coercion—but few states had followed suit.

While Tinsman agreed that trafficking sounded like a horrible violation of human rights, she wondered what it had to do with her constituents back in Iowa. “As I was thinking that, he said they were prosecuting a case that year in Cedar Rapids, Iowa,” she recalls. “And he looked at me, and he said, ‘Where are you from, Senator?’”

She was speechless. “When we banned slavery,” she says, “I thought that meant forever.”

In fact, modern-day slavery probably touches every corner of our lives. “Human trafficking victims make an alarmingly high number of consumer goods and food products that are both imported to the United States and produced domestically,” according to the anti-trafficking Polaris Project. “More often than we realize, somewhere in the supply chain of the products we buy, elements of exploitative child labor or forced labor may be present.” 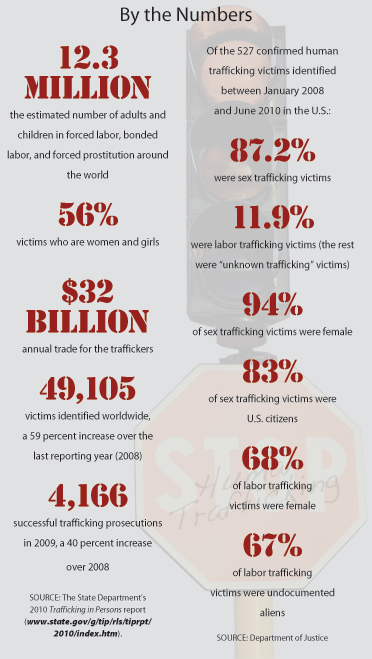 When Tinsman returned from that eye-opening trip to Washington, she immediately went to work to make human trafficking illegal in Iowa, holding forums and meeting with law enforcement officers, prosecutors, religious groups—anyone who would listen. She drafted legislation and brought it to her colleagues in 2006, knowing that the hardest part wouldn’t be convincing them that trafficking was a serious problem—but that it was their problem.

She recalls, “Everybody said, ‘But it’s not here.’”

Like domestic abuse years ago, human trafficking is a crime that people can’t believe actually happens in their communities. In fact, rural areas like Iowa hold particular appeal for human traffickers. Law enforcement, health providers, and members of the public rarely know how to identify possible trafficking victims—or even think to look for them. Usually, victims are girls who, because of their family background or personal experience, distrust police officers or social workers or other authority figures. On average, these exploited youngsters are only 13 years old.

Even when cases of human trafficking are uncovered, successful legal prosecutions are difficult, as Drew Henning knows all too well. Henning*, 08BA, has worked for three years as a paralegal with the Department of Justice’s Civil Rights Division-Criminal Section, helping investigate and prosecute federal criminal civil rights cases all around the United States. Commonly, investigations cross jurisdictional boundaries and span years or even decades. They involve mountains of paperwork, victims who are reluctant to testify, and jurors who often don’t understand why a victim didn’t just leave.

It can be difficult for outsiders to comprehend just how completely traffickers exert control, overwhelming victims with what Henning calls “an orientation to fear.” Denied medical treatment or basic necessities like food or shelter, victims endure repeated physical and psychological abuse.

If the case involves foreign nationals brought into the U.S. under false pretenses, victims may not speak the language or understand the law. One case Henning worked on involved a Nigerian woman who was enslaved for nine years in a well-to-do Dallas suburb.

The woman was stripped of her travel documents, routinely sexually assaulted, forbidden to leave the house, and forced to work 16-hour days for no pay. Prevented from talking with anyone outside the home, she rarely had phone contact, which was strictly monitored, with her family in Nigeria. Only after she was able to hide in a closet and make a phone call did she manage to find a way to escape. When the case came to trial, neighbors said they’d never even seen her during her long captivity.

Henning won’t forget the day the woman took the witness stand and told the courtroom, “Once I left that house, my life started.” As he says, “Many more victims are still living in fear.”

Back in Des Moines, Tinsman’s efforts paid off in spring 2006, when state legislators unanimously passed anti-trafficking legislation, making Iowa the 14th state in the nation to criminalize human trafficking. Today, all but 12 states have similar laws. Iowa’s law makes it a serious felony to engage in trafficking (“I wanted it to be life in prison, but it didn’t get that far,” Tinsman says), and also provides social services for victims and training for law enforcement officers.

Henning says he’ll keep fighting too. This fall, he’ll enroll in law school with a goal of eventually becoming a prosecuting attorney, specializing in human trafficking and violent crimes. During winter and summer breaks, he’ll intern with the Cook County State Attorney’s Office in the organized crime and human trafficking section.

Kate Walker will spend the next two years on an Equal Justice Works Fellowship sponsored by San Francisco law firm Pillsbury Winthrop Shaw Pittman. She’ll work with the juvenile court, the district attorney’s office, and other community advocates to develop a system that holistically addresses the needs of girls who have been exploited in Alameda County. She wants to develop a model that can be established in other cities and that represents a dramatic shift in the way young trafficking victims are treated. Until recently, many were misidentified as criminal participants.

Indeed, despite the efforts of advocates like these UI alumni, misconceptions about the nature and reach of human trafficking persist. Only in the last decade have many nations even admitted its existence and made any real attempt to end slavery. In 2000, the U.S. enacted the Trafficking Victims Protection Act (TVPA). Since then, the State Department has issued an annual Trafficking in Persons report that assesses international efforts against bonded labor, involuntary domestic servitude, sex trafficking, and other terms used to describe the ultimate exploitation and degradation of men, women, and children.

“Most countries that deny the existence of victims of modern slavery within their borders are not looking [or] trying...,” says the 2011 report. “There is no shame in addressing a problem of this magnitude; the shame lies in ignoring it.”

Especially in the Land of the Free.

Tricks of the Trade

Whether it happens in urban California, rural Iowa, or anyplace in-between, the methods that traffickers use to ensnare their prey are essentially the same.

A pimp will identify a vulnerable girl—often a chronic runaway or a temporary exile from an unhappy home. He’ll offer clothes and food, a place to stay, even the semblance of love and protection. Eventually, he’ll persuade or force the girls to earn him money through prostitution.

“They’re sitting ducks,” says Maggie Tinsman, an anti-human trafficking advocate and former Iowa senator. “I tell teenagers: ‘If you get so mad at your parents and you walk out the door, you’d better walk right in the door of a friend. Don’t go into the street. You won’t have a chance.’”

One recent Iowa case involved a 13-year-old runaway from suburban Minneapolis, who was kidnapped and forced to work as a prostitute in small Iowa towns, right under the noses of police. It wasn’t until a member of the prostitution business tipped investigators off to the crime that they opened a multi-jurisdictional, months-long investigation, which resulted in a half-dozen arrests and convictions.

Join our email list
Get the latest news and information for alumni, fans, and friends of the University of Iowa.
Sign up now
Related Articles
Fields of Opportunities
Beginning with Gov. Bob Ray's Vietnam-era trip to Southeast Asia, Iowa is known for its humanity toward refugees.
NEWSMAKER: Hashtag for History
Keisha Blain's syllabus project puts current events in perspective.
A Woman with Drive
Molly Cantrell-Kraig pays it forward to help others succeed.
Living Mandela's Legacy
Two South African women used their UI education and experiences to help rebuild their country after apartheid.