View All From You
Share
IOWA Alumni Magazine | February 2011
Bacon Nation
By Jackie Hartling Stolez
"Everything should taste like bacon." 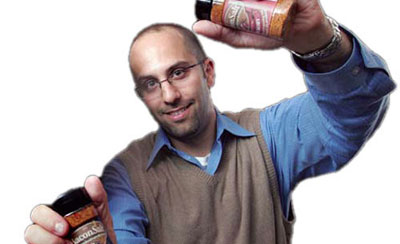 With those words, a partnership was born that has brought the world Bacon Salt, Bacconnaise, and even Bacon Soda. Dave Lefkow, 95BB A, is half the genius behind this onslaught of bacon-related products. He and his business partner, Justin Esch, founded J&D's Foods, a company with the tagline, "Everything should taste like bacon."

Lefkow was an early and ardent consumer of bacon. "I love bacon always and forever," he says. "No offense to my wife, but if bacon were a person, I'd be married to it."

In 2007, Lefkow and his partner started their business in a Seattle-area garage, expecting a fun side project. "We grossly underestimated the world population's love for bacon," he says. "In five days, we sold out our entire 6,000-jar initial run."

Business for the low-sodium, zero-calorie, zero-fat, vegetarian, and kosher seasoning continues to be good. Lefkow handles marketing, product development, operations, some PR, and international sales. In the beginning, J&D's marketed only on social media; they friended everyone who said "I love bacon" on their Myspace profiles. "This worked surprising well," Lefkow says. "It's a very inexpensive way to get the word out."

An added bonus: marketing became a dialogue. "We let our customers tell us what they think," says the "bacontrepeneur," "and we try to learn from what they tell us."

It's clear that Lefkow and his partner don't take themselves too seriously. "We try to have personality," Lefkow says. With that in mind, they came up with ventures like the recent "Bacon Kevin Bacon" project, which raised $4,100 for the childhood cancer charity they set up in Lefkow's daughter's name—she was diagnosed with leukemia in 2009 and is now in remission. J&D's found an artist to sculpt a bust of Kevin Bacon out of bacon (what else?), and sold it on eBay. "Fortunately, Kevin Bacon has a sense of humor and also supports cancer charities," Lefkow says.

"Bacon goes well with just about everything, so there really isn't an end in sight," Lefkow says. And by the way, he adds, "We're good with PETA since we don't kill any piggies."